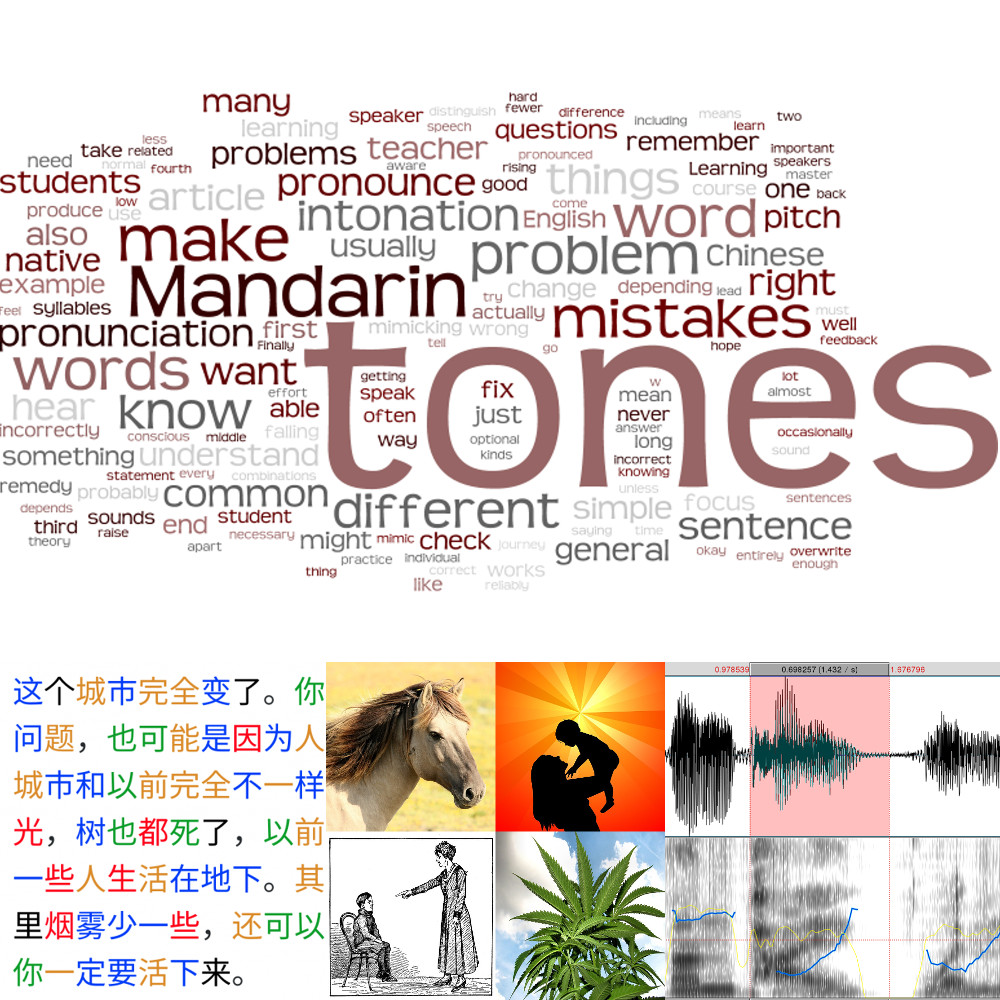 Languages have much in common and a strategy that work well for learning one language is likely to be successful for learning another.

However, each language also has its own challenges that you are unprepared for unless you have already learnt a similar language.

When it comes to Chinese, the two major such challenges are characters and tones. No other modern language except Japanese will equip you for the challenge of learning a few thousand characters, and while a majority of the world’s languages are tonal, it’s still unlikely that the average reader of this article has learnt a tonal language prior to Chinese.

A guide to learning tones in Mandarin

This article is about the second of the two challenges mentioned above, tones. As is usually the case, I write about Mandarin, but much of what I say is also valid for other tonal languages, including other Chinese dialects such as Cantonese.

This article is meant to be an umbrella that gathers and connects the many articles I have already written on the subject of tones, providing a better overview for students and teachers. Thus, I don’t intend to repeat everything here, but will instead provide summaries and links for further reading.

This article is divided into several parts: 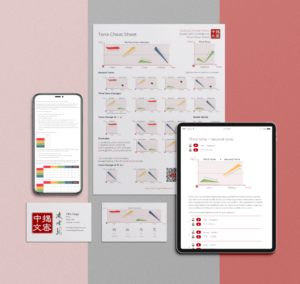 Before we get to the main parts of this article, I’d like to mention that I offer a course that will help you figure out tones, either as a beginner or as an intermediate learner who struggles with hearing and/or pronouncing the tones. You can check it out here:

The rest of the advice on this page is for free, however, so the course is mostly for those who want everything collected in one place with nice tone diagrams and high-quality audio.

Tones are differences in pitch that change the meaning of a spoken syllable. Unlike intonation, tones are not merely used to signal the emotions and attitudes of the speaker, they are used to differentiate between completely different words.

If you have no prior experience of tones, it might be helpful to think of them as vowels. Speakers of English of course know that “bed” and “bad” mean different things, and if you change the vowel, it’s no longer the same word. This is easy to hear for native speakers of English, but such a shift can be tricky for speakers of other languages, including Mandarin.

Similarly, if you change the tone of the syllable ma from low to high, the word changes from “horse” to “mother”. This might not feel very different for the novice, but the difference is as significant as the difference between “bed” and “bad”.

Below, I will only outline the way I teach Mandarin tones and will not repeat things that can be found in beginner textbooks and courses. Here are the basic definitions of the tones:

This gives a clear system which is easy to remember and less complicated to put into practice than the traditional way of teaching the third tone as a dipping tone. If you’re not convinced, I have written a separate article about this issue:

Apart from the four basic tones, there’s also a neutral tone, which is not a fifth tone, but rather an unstressed syllable that has no inherent tone of its own (it borrows it from somewhere, usually the preceding syllable or intonation). I have written more extensively about the neutral tone here.

Actually, it’s not only the neutral tone that changes based on the environment, this happens to the basic tones as well, especially the third tone. This normally covered quite well in most standard textbooks and courses, but I would like to point to this article about which of these tone change rules you have to apply and which you don’t need to care about so much (for now):

As a way to segue into the next part about the importance of tones, I’ll quickly address a question that at least one person in every class of beginners will ask: What about tones in music? If Mandarin is tonal, and the tones conflict with the tune being played, what then?

The simple answer is that tones in songs are usually ignored. Yes, this means that unknown lyrics are harder to understand and that there are sometimes ambiguities. But if people are still able to understand, how important are tones really?

How important are tones?

The fact that a sentence in a song or a phrase spoken by a beginner student can be understood even if the tones are ignored, does not mean that tones are not important. Sentences in English can usually be understood even if you replace all vowels with i, at least if they are relatively normal, context in given and the sentence is otherwise correct. No-one would take this to mean that vowels are not important in English.

What you have to realise as a beginner is that tones are not optional. They are an integral part of the language and the earlier you learn them, the better. I have spent hundreds of hours trying to correct tone problems, and it just gets harder the longer you wait. If you’re new to Mandarin, just take my word for it.

The reason you sometimes here people saying that tones are not so important is because of what I said above about context. If you are a beginner and use Mandarin with incorrect tones in a setting where what you say is highly predictable, tones don’t really matter that much. Neither do vowels, nor grammar.

The best example of this is going to a cafe with a limited number of items on the menu. The waiter doesn’t actually need to understand what you say, he just needs to understand which item you want and how many. This is much easier than hearing what you say.

The best counter example is going by taxi to a somewhat obscure address (i.e. not the airport or train station). If you get even one tone wrong, it’s very likely that the driver won’t have a clue what you’re talking about. There is little context to rely on when it comes to names, so every single mistake is serious.

So, tones are important.

Learning tones in Mandarin is a complex process and I will merely sketch an outline here. The problem can be divided into two parts: hearing tones and speaking tones. The former is highly individual, with some learners picking tones up immediately and others struggling for years. I wrote an overview about how to learn to hear tones here and will probably write more about this later:

To help you learn to hear tones, I have also constructed a free tone course together with Kevin Bullaughey over at WordSwing. It provides you with varied input in a systematic fashion that research suggests is beneficial. The course only deals with single tones for now, but it could still be helpful for beginners.

The second part of learning tones is learning how to produce them yourself. This is something I have taken a great interest in over the years. Here are a few things from my course Hacking Chinese: A Practical Guide to Learning Mandarin:

I have also written about learning pronunciation as a beginner here:

If you have studied Mandarin for a while and want a reality check, try the following exercise:

This is a form of minimal pair bingo, and I have described the process and why it’s useful in the article linked to below. If you are a beginner, you can use this test, but with only one row or column at a time! This exercise is harder than most students think, so take it easy.

Unless your tones are very solid, the above methods probably will reveal some issues. That’s good; the problems were there before, you just didn’t know about them. However, there are many kinds of errors and the remedy for each is different. Make an effort to figure out what the problem is and then try to fix it.

7 kinds of tone problems and what to do about them

One of the problems mentioned in the article above is remembering tones, which can be tricky. The system I use for this is fairly simple and is based on one of the standard colour systems for tones (more about that in a bit). It can be combined with most other mnemonic strategies involving associations and/or stories (if you have no idea what mnemonics are, please refer to Remembering is a skill you can learn).

Each tone is associated with an element that you then incorporate into the environment/background of the association/story. It shouldn’t be part of the story, really, but instead form the background:

There are many colour systems and you can adapt this to your own needs. Colours can also be used in other ways, such as allowing you to read characters with tones highlighted without relying on Pinyin:

There are many resources for learning tones and this list is not meant to be exhaustive. Please refer to Hacking Chinese Resources for a full list (just search for “tones”). If a significant resource is missing there, please let me know and I will add it!

Here is a collection of resources for learning pronunciation in general:

For tones specifically, here are some basic reference charts:

The Chinese Pronunciation Wiki has much more information on pronunciation than just the chart, so be sure to check it out. Sinosplice also has a good introduction to pronunciation, including tones, here. You want a bit more with more references, also check the Wikipedia article on Standard Chinese Phonology.

For book references in English, check:

For references in Chinese, check:

That’s it for now! If you have suggestions for additional resources or things you think this guide should cover, please leave a comment!