If you look online for an answer to the question of how important tones are when learning Chinese, you typically find two types of answers:

Tones are essential and you should make sure to learn them properly from the start.

Tones actually don’t matter that much and even native speakers don’t really use them.

I have so far never seen anyone with some training in Mandarin phonology claim that tones are not important, and it’s also exceedingly rare for teachers to hold this view. The reason is that tones actually are important, so this is the correct answer.

Still, there are people out there who believe that tones aren’t that important. It would be easy to just dismiss this as being ignorant, but I think there’s more to it than that.

Why does this misconception persist?

Why would otherwise sensible people claim something that is outright wrong?

In this article, I will explore a number of things that might explain this and also show some interesting things speaking and listening ability.

Let’s start with what I believe is the main reason tones are underestimated by learners: 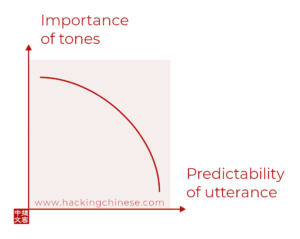 Let’s look at two examples before I explain why this is the case and what it means.

It’s easy to see how these different scenarios can give rise to different ideas about the importance of tones. If you often find yourself in the first type of situation, you might draw the conclusion that you can get away with bad tones, but if you’re using Chinese in a wider range of contexts, you’ll quickly realise that tones really are important.

To be honest, most people who claim that tones are not important are themselves students. Either they have mostly used Mandarin in high-context situations or they are simply unable to evaluate how other people use tones when speaking Chinese, including native speakers, thus thinking that they don’t use tones in natural conversations (they do of course, more about this below). This misconception can be further enhanced if native speakers praise the student’s pronunciation, even if it’s actually quite bad, giving rise to a false sense of competence.

Another common misconception is that speaking quicker somehow makers your Chinese better. It might if your goal is to fool someone who’s ability is much lower than yours, but you certainly don’t fool native speakers! If you want to sound like a native speaker, the key is not to speak quickly, but to follow the guidelines laid out in this article by David Moser:

Naturally, it’s easy to claim that tones are not important if you yourself don’t hear the tones. It would be like someone learning English mixing up “bitch” and “beach” and then claiming that it’s fine to ignore vowel difference like that, as long as you speak quickly enough.

That obviously isn’t true, but that is how it sounds when people claim tones are not important in Mandarin.

Of all realistic situations we might find ourselves in, saying the name of an unknown, obscure place in a big city is very unpredictable for the listener. People’s names are in the same league.

Most conversations don’t take place in this realm of extreme unpredictability, because there usually is more context to help the listener understand.

But most conversations aren’t like going to the airport either. What’s the purpose of having a conversation if you’re limited to saying things that the other person can guess before you say them? Clearly, you want to be able to communicate! 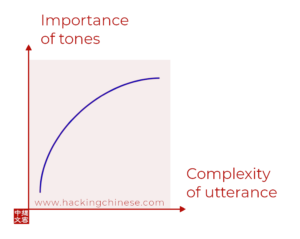 In general, the importance of tones increases in proportion with the complexity of what you’re saying.

In particular, the number of words you use when you speak Chinese has a big impact on predictability. If you only know 200 words and have spoken with the same person for a while (maybe your teacher, partner or good friend), the guess-what-the-foreigner-is-saying game becomes quite easy, because there are limits to what you can say. However, if you know 20,000 words, it’s much harder.

The importance of tones also increases in proportion with the complexity of the message. If it would require mental effort to understand what you’re saying even if said perfectly by a native speaker, do you really want people to spend their cognitive resources trying to figure out what words you’re using?

Clearly not. Instead, the goal of learning pronunciation is to limit the distorting effect mistakes have on our ability to communicate.

Regarding the nonsense about native speakers not using tones, that is clearly just that: nonsense. Tones are an integral part of Mandarin phonology and they can’t be ignored more than vowels can.

That being said, pronunciation in connected speech is rarely exactly as it is taught in a classroom. This is true in any language, but how much speakers of that language are aware of it varies between individuals. Native speakers of English pronounce words in wildly different ways depending on context, so some variation is to be expected with tones in Mandarin as well. Most native speakers are not aware of this!

Most of these changes in pronunciation are optional for speakers, though, and most of them come naturally with increased fluency in the language. The variation can make it harder to understand and learn initially, but  that doesn’t mean that tones aren’t there, or that they are morphed beyond recognition in most cases. The only such case is the third tone, which I have covered in a separate article:

I’ve been meaning to write an article about tones in connected speech for almost a decade now, but in the meantime, check this article from John Pasden over at Sinosplice: Seeing the Tones of Mandarin Chinese with Praat. I have spent literally hundreds of hours in Praat looking at native and non-native pronunciation, and believe me, the tones are definitely there!

In fact, this argument can be made for anything related to speaking and accuracy, such as initials, finals, words choice, grammar and more. The more context, the less accurate you need to be to make yourself understood. The reason is that when we listen to someone talking, we must rely on two different kinds of processing:

We use both these types of processes all the time when listening, and listening wouldn’t be possible without them. Experienced listeners will be able to make sense of what you say as a second language learner, even if you make mistakes, provided that they can employ knowledge about context and language to fill in the gaps. The more serious the mistakes and/or the less context is available, the more likely it is that the listener fails to understand.

Tones are more important than most people think

I suppose this was just a rather long-winded way of saying that tones are important. Don’t overlook tones. Don’t think you’ve mastered tones after studying for a semester or two, because it’s unlikely that you have. Don’t believe people who say you shouldn’t bother with tones or that you can learn them later.

The fact that your teacher, good friend or partner seems to understand what you say most of the time when using basic sentences is not a stamp of approval saying your tones are good enough.

Teachers are used to hearing foreigners speak Chinese and know roughly what you’re going to say. When you leave the classroom, bad tones will cause trouble.This doesn’t mean that you have to obsess about tones and avoid speaking at all, it just means that tones should be on your mind until you can confirm that you really know them. My favourite way of analysing tone problems is with the simple guessing game I have described in this article, why don’t you try it out next time you have a native speaker around?

Naturally, there’s more to learning Chinese than tones and pronunciation, but if it’s something you really shouldn’t overlook as a beginner or indeed intermediate learner, it’s tones.

A question to the reader: While I can explain the cognitive processes involved in listening comprehension in some depth, my theory about why people keep claiming tones are not important is just that: a theory.

What do you think? Why is it that some people maintain that tones aren’t that important? If you’re one of those people, what’s your counter-argument to what I’ve said here? Please leave a comment below! 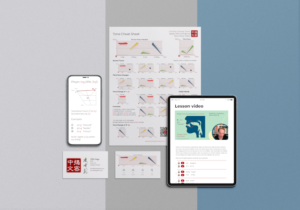 This video course is for those who want to learn Mandarin pronunciation, from beginners who struggle with tones and Pinyin to more advanced learners who want to fix errors or polish their accent. Pronunciation is essential; get it right now and save yourself a ton of trouble later!

The course only periodically opens for registration, but if it’s not open when you check it out, you can sign up to the waiting list to get notified when the course opens again.

More about tones on Hacking Chinese

Editor’s note: This article, originally published in 2012, was rewritten and massively updated in June, 2021.