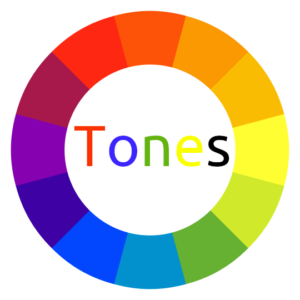 One of the biggest challenges learning Chinese as an adult is to master the tones. While some students have an easier time, the large majority of students struggle with even with basic tones and tone combinations.

Many things have been tried to make tone learning easier, including various forms of visual representation, such as using tone marks or symbols (jiēmì zhōngwén) or tone numbers (jie1mi4 zhong1wen2).

Another such representation is colour, meaning that each tone associated with a certain colour, often in combination with some other representation, such as tone marks (jiēmì zhōngwén). It’s also possible to ignore the Pinyin altogether and simply colourise the Chinese characters directly: 揭密中文.

In this article, I will discuss using colours to learn and remember tones. I will talk about why it can be helpful, what research tells us about it’s role as a learning tool, and some tools you can use if you want to spice up your learning with nifty colours.

This article doesn’t cover learning tones in general, so if you want to learn more about that, please check out The Hacking Chinese guide to Mandarin tones.

While this question may seem straightforward, it hides at least three different questions:

I will discuss each of these separately, because as we shall see, which aspect you look at has a big impact on the answer of whether colours really do help or not.

Does adding colour make it easier to learn to hear/say tones?

Learning tones is a complex process and something I’ve spent a lot of time researching myself. I have summarised the passive (listening) part of tone learning in this article: How to learn to hear the tones in Mandarin.

One thing I’ve learnt after reading almost everything published about this specific topic is that what intuitively seems to make sense doesn’t always work.

For example, adding more information doesn’t always make it easier to learn (so adding both tone marks and colours might sound like it should be better than leaving one of them out, but this isn’t necessarily the case; see Van Merrienboer & Sweller, 2005). Another example is that minimal feedback (right or wrong) can be more useful than more verbose feedback (right or wrong, plus what ought to have done; see Maddox et al. 2008).

So, even if the gut reaction is “why not”, just adding colour support to the learning process might not be a good idea. Fortunately, there is some empirical research into this very question.

In 2017, Godfroid, Lin and Ryu conducted an experiment with zero beginners, comparing different visual representations, namely tone mark, tone number and colour. They found that all three had positive effects, but that colour did worse, especially in tests done some time after the initial learning took place.

This, however, doesn’t tell us much, because I don’t think anyone really proposes to use only tone colour, but rather to use colour in combination with some other support, such as tone marks (e.g. jiēmì zhōngwén). Fortunately, they tested this as well, but found no significant benefit compared to using only tone marks or tone numbers. To put it very briefly, adding fancy colours didn’t improve learning compared to traditional black-and-white, but actually performed slightly worse.

Naturally, this is only one study and it only pertains to the learning process for beginners. Maybe it would have been different in the long-term, maybe different students would have preformed differently, or maybe the colours chosen were not the right ones (more about this later). But then again, it’s perfectly reasonable to assume, for now, that adding colours in the learning process does not make it easier to learn tones.

Does adding colour make it easier to remember tones?

To the casual reader, this question may look similar to the previous one, but it is in fact very different. In order to pronounce tones correctly, it’s not enough to learn how to say them, you also need to remember what tone or combination of tones a word has. This is much more akin to recalling other aspects of vocabulary, such as other parts of pronunciation or even meaning.

The question of recall was not tested in the study cited above and it’s much more reasonable to assume that more indeed is better when it comes to recall. In general, using different paths to the same information is beneficial for recall, including using different senses (modalities).

One concrete way of using colours to remember tones is to use them as part of your mnemonics. I will not go into memory techniques in detail in this article, but one way of doing it would be to associate each colour with an element, and then include that element in your mnemonics. Like so:

I have written more about this here:

There are other ways colours could be used, including more indirectly. Maybe after seeing the same colours being used for the same tones over and over, certain words will be easier to associate with the correct tones? Something similar has been investigated for learning gender in German, but I’m not sure if that’s entirely applicable to what we’re talking about here (see Dias de Oliveira Santos, 2015). Colour was found to not be beneficial in that study.

Does adding colour have some other practical benefit for learners?

Finally, let’s discuss some practical aspects of using colour to indicate tones. One benefit is that for most people, it’s easier to see colours than tone marks. I don’t have very good eyesight myself and colours could help me if the tone mark is simply too small. Another benefit is that colour can be easily applied to characters to indicate tones without even showing Pinyin (揭密中文). I’ve written more about this here:

For some people, this might be more intrusive than adding tone marks, but for others, the mixed colours might be distracting. I prefer tone marks myself, but I can see why some people like colours.

What colour should represent what tone?

I’m sure many of you think using red for the first tone is deeply unintuitive. Maybe you prefer blue instead? The paper by Godfroid, Lin and Ryu (2017) cited above actually has an overview of research into mapping colour to pitch, basically stating that lower pitch and falling tones are generally associated with darker colours. They ended up with a colour scheme that looks like this (from page 829): 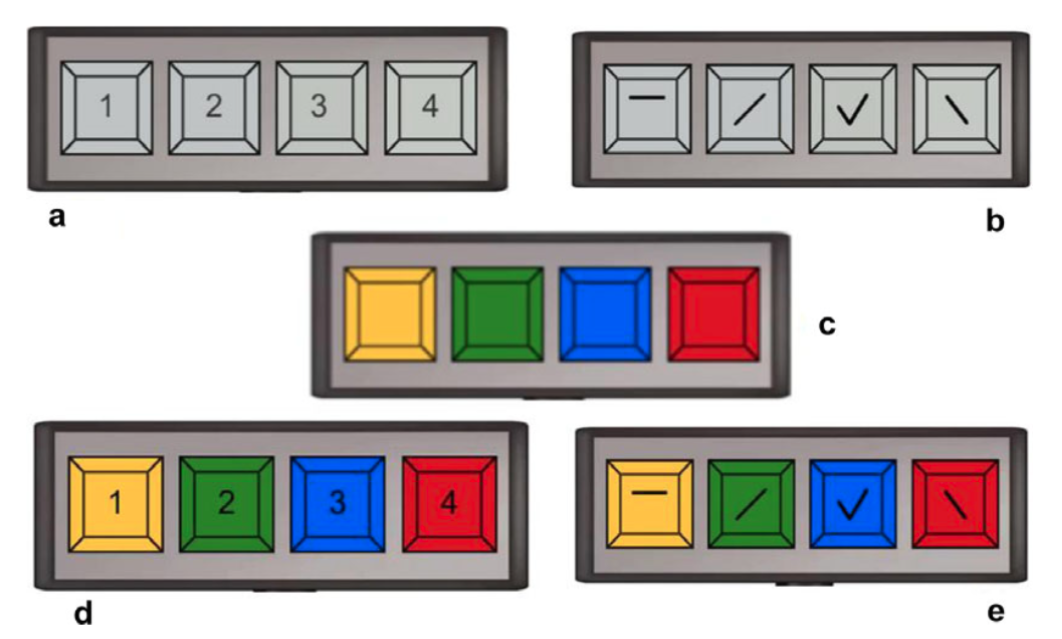 However, I believe that which colours make sense is probably individual and is mostly determined by what colours you started out with.

And this is important, because there are a lot of different systems being used. This table is from a blog post by Alfred Wolfe titled Tone Colors and What Pleco Did with Them:

If you want to learn more about the story behind these colours, I strongly suggest you read the whole article. For our purposes, though, it’s enough to conclude that it’s a mess. I mean, just look at the second and third tones! Half of these systems use orange/yellow for second tone, the other half uses green. Fine, but then for the third tone, the situation is almost reversed!

Any benefits with colours for tones is dependent on learning the mapping thoroughly, which is hard or impossible if different materials use different mappings. Therefore, if you teach beginners or create materials for them, then by all means use colours if you think it’s helpful, but make sure you pick one system and stick with it. Your students will not be familiar with any other way of doing it and will probably accept your mapping.

If you target anyone else, though, either skip the colour entirely or make it something the user can set as a preference. Being forced to use what amounts to the wrong colour-tone mapping is certainly bad and outweighs any marginal benefits colours might have.

Tools for colouring your Pinyin/characters

As promised, here are some tools you can check out if you like colours:

Do you know of any other tools that implement colours well or that can be used if you want to add colour to your learning? Be sure to let me know in the comments!

In summary, colours probably don’t make the initial learning process much easier. They can have some benefits for remembering tones if you use them correctly, though, and maybe colours have some other practical benefits, such as being useful for showing tones without Pinyin or simply being easier to see than tone marks.

However, the downside of all this is that colours have to be consistent to be useful, so it’s only really useful for beginners or when the student can choose which colours to use. Since there are so many different systems around, colour is likely to confuse more than it helps!

Wolfe, A. (2014). Tone Colors and What Pleco Did with Them. Laowai Chinese 老外中文
Tips and Strategies for Learning to Speak Mandarin Chinese. Accessible online here.