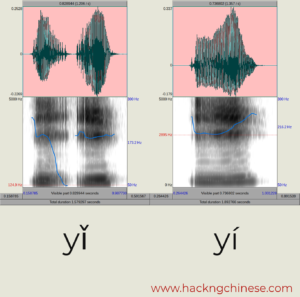 Which tone is the hardest to learn in Mandarin? In general, the answer is the the third tone, which I have discussed at great length in an earlier article and podcast episode. The third tone is hard both because it varies a lot depending on context and because it’s often misunderstood.

But what’s the second hardest tone to learn in Mandarin? Based on more than a decade of teaching, much of which has been focused specifically on pronunciation, my answer is clearly the second tone, at least if we’re considering people coming from a non-tonal language such as English.

Earlier this year, I launched my pronunciation course, and since I’m going to open it for another round again on May 10th, I thought I’d share some insights from the previous round. I’ll start with the second tone in this article.

If you want to learn more about the pronunciation course, you can check out the information page here:

When first introducing tones in Mandarin, I usually go with a very simplistic version, saying essentially that there are four tones: one high, one low, one falling and one rising:

For people who have never really thought about pitch, it can be helpful to think of the rising tone as being similar to a singe-syllable question in English: “Tea?”

Here are some important things to note about the second tone:

Those are the basics regarding the second tone. Actually, it doesn’t look that complicated, so where do students go wrong? Let’s have a look!

The most common learner problems with the second tone 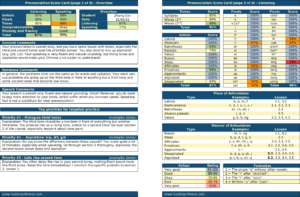 Over the years, I have helped hundreds of students to improve their pronunciation, some of them via direct and detailed analysis and feedback as offered through the pronunciation course. Like I said in the introduction, the third tone dominates when it comes to tone errors, but the second tone is easily number two in terms of how often students mispronounce it.

Here are the most common problems students make and how to fix them:

The main difference between the second tone and the dipping third tone from an acoustic point of view is the turning point, i.e. when the pitch starts to rise.

Wait, I hear you ask, does the second tone have a dip in it?

Yes, it does, but it comes very early and it’s not something that I normally talk about. Why? Because the problem is that people make this dip too big unintentionally even without knowing about it.

Let’s have a look at the pitch contour of a typically second tone and a dipping third tone. These are actual pitch contours of the syllables yǐ and yí respectively (cluck the links to hear the audio). The analysis was done in Praat: 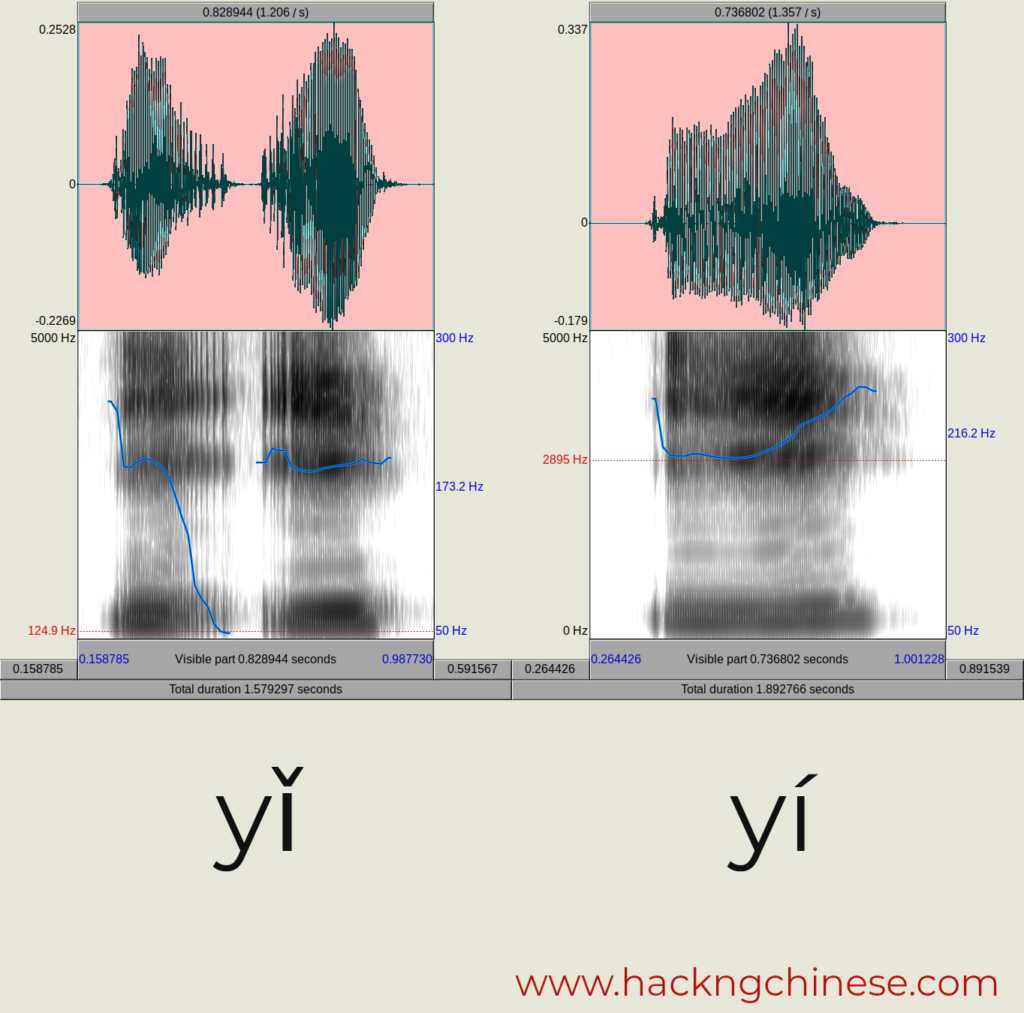 The blue line in the lower half of each image represents pitch. The black-and-white background is a spectrogram and the top half of the graph is the waveform.

As you can see, the second tone (right) has a clear dip in it, even though you can probably disregard the high start there as pitch data is usually not reliable at the very end and very beginning of a sound liket his. There’s still a dip, though.

The third tone (left) also has a dip (but again, you can ignore the first few data points at the very beginning). The line is broken in the middle because, as you can see in the waveform above the pitch contour, a dipping third can have a pause in the middle and thus no tone.

There are two differences worth noting between the two graphs:

This leads us to the crux of the first problem with the second tone: Many students rise too late, making it sound like a third tone. They usually don’t go down enough to actually make it into a third tone, so the result is an ambiguous tone somewhere in the middle between second and third.

Here’s an actual example from a student in the previous round of the pronunciation course, with the syllable tí: 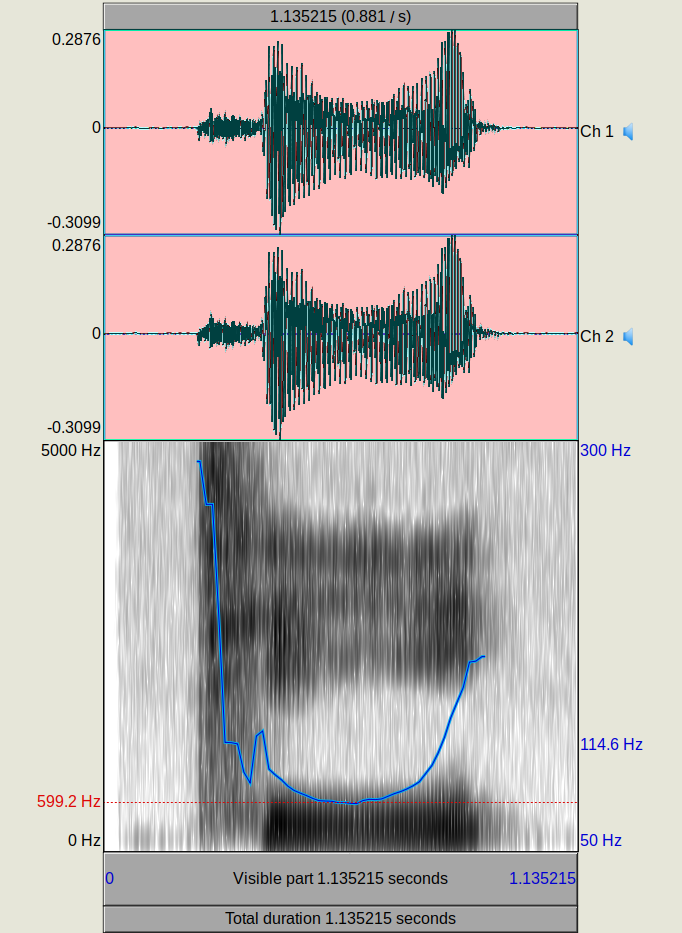 If your second tone has a dip this low and a rise that comes this late, there will be occasions when people think it’s third tone. Once combined with other syllables into words, it usually gets worse in that the rise is left out completely. See problem 3 below.

Takeaway: Even if there really is a dip at the beginning of the second tone, you should never aim for that, it will just make your second tones sound like third tones. Instead, strive to rise immediately from the start. The slight dip will be there naturally.

Another problem common with the second tone is to start too high. This is problematic, because if you’re going to pronounce a rising tone and you start at what is already for you a high pitch, you will run out of pitch range to raise your tone further.

Like I said in the introduction, the second tone is supposed to be 35, i.e. going from mid to high. If you start at 4 or even 5, you simply won’t be able to rise from that point. The result is either a squeaky voice or a high tone similar to a first tone.

Note that tones are not about absolute pitch, but rather pitch contour. What matters is that you rise, not exactly where you start and where you end up, but the shape of the tone you pronounce. You start at your comfortable mid tone, not your teacher’s mid tone. Males have deeper voices than females, but that doesn’t make tones harder to understand.

Takeaway: If you find it hard to rise on the second tone, it could be because you start too high, which will make it physically hard to go higher. Simply start lower! You’re meant to start at a comfortable mid tone, from which it shouldn’t be hard to rise.

The third problem we’re going to look at involves not rising enough, which also risks being confused with a third tone (the low variety). This can happen both in isolation, but perhaps more commonly in words.

For example, in a word like 学生 (學), xúesheng, make sure you actually pronounce the first syllable with a rising tone. It’s all too common to hear students say something that sounds more like xuěsheng. In this particular case, there might not be many other words that it can be easily confused with, but each mistake like this makes it harder for people to understand what you’re saying.

Here’s an example of a pair of words that differ in this way:

It’s quite common for students to pronounce “slave” the same as “strive”!

Takeaway: The later the rise comes and the deeper the dip is (problem 1 above), the more likely it is that the rise will disappear completely in words. Make sure that the second tone is still a rising tone, even at the beginning of words! This is related to both the previous issues, but manifests itself in a different way.

Conclusion: Why learning the second tone is hard

Those are the three common issues I see/hear students make when it comes to the second tone. While I have strong opinions on how the third tone is introduced, taught and explained to adults learners, I think the difficulties surrounding the second tone are not really related to how it’s taught. Most teachers and textbooks simply say that it’s a rising tone, some with the added detail of the 35 pitch contour, which is correct.

In this article, I’ve provided more information about the second tone than most people actually need or indeed want. The goal is to make sure that those of you who need this can find it somewhere, not that all students should read this article. I would be surprised if many people who don’t have a problem with the second tone have read this far!

This is also the underlying philosophy of my pronunciation course: I want to provide enough instruction and details to allow someone who really struggles with an issue to know what’s wrong and how to fix the issue. That means that all students might not need the full details of every aspect of Mandarin pronunciation, but at the same time, it’s very likely that whatever problem you have is covered!

As I said earlier, the pronunciation course will open for registration again on May 10th, so check out the information page here if you’re interested: