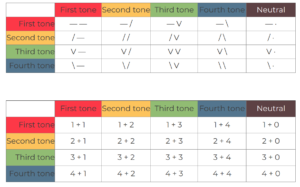 Even people who haven’t studied Mandarin knows that it can take some time to learn the tones and some of the trickier sounds, but there are actually other problems you need to be aware of when it comes to pronunciation that are unrelated to the sounds themselves.

The main problem is that most people will not give you honest feedback on your pronunciation. Most people who say that your pronunciation is great mean it as encouragement, not as a statement of fact, or if they do mean it, they are comparing you to other foreigners whose Mandarin probably isn’t very good. The fact that your teacher stopped correcting your tones doesn’t mean much either, as most teachers don’t have the time or persistence to keep working on pronunciation after the initial stages of a beginner course.

How to figure out how good your pronunciation is

This means that it can be surprisingly hard to figure out how good your pronunciation is, and the likelihood is that it’s worse than you think it is. If you want to improve your pronunciation, it’s essential to identify what problems you have and start working on them as soon as possible. Some problems might go away naturally with more listening and more practice, but problems you aren’t aware of can persist and become so cemented they’re almost impossible to get rid of.

So what’s the solution?

You can do one of two things:

The method I want to introduce is a variant of what it sometimes called “minimal pairs bingo”, which probably doesn’t tell you much unless you’re a language teacher. In phonology, a minimal pair consists of two words that only differ in one single regard, such as “bat” and “bet” in English, which are the same save for the vowel sound in the middle. In Mandarin, the words 好 hǎo “good” and 老 lǎo “old” form a minimal pair because they only differ in the initial sound.

This difference between the words can be any phonological element, including tones, so 买 (買) mǎi, “to buy”, and 卖 (賣) mài, “to sell”, form a minimal pair. Naturally, we don’t have to limit this to pairs, so triplets or quadruplets are possible as well (larger groups are sometimes called minimal sets). You have probably seen at least one of these when first introduced to tones. Here’s the one I use in the pronunciation course:

In fact, this method can be expanded to include 20 words at once, even if this is overkill for most people! I will show you why and how to do this later.

Here are the two main things you can use this method for:

To do this, you need a native speaker and a way of writing down things so the other person can’t see what you’re writing.

How good are your tones and tone pairs really?

Below, I have included two tables containing all possible tone pairs in Mandarin, twenty in total, including the neutral tone. While you can use the full table to check your tone pairs, I suggest that you limit yourself to certain rows or columns first. The first time I used this method to check students’ pronunciation in class, I vastly underestimated how hard it would be and most students performed so badly that I deeply regretted using tho whole table at once.

Or with numbers if you prefer:

This is a simple way of representing all the combinations of two syllables in Chinese. First look at the column to the left and select a tone, then combine it with any of the five available tones that can follow it. Please note that 2+3 and 3+3 are practically the same because a third tone followed by another third tone changes into a rising tone.

Here comes the crucial bit: You have to use words that only differ in tone! If you can’t find such words (which is highly likely if you use at least a full column or row), you need to make words up. You should not use words that exist in Mandarin but differ in more than one regard! For example, if your working on the first column above, you shouldn’t use the words:

The reason is that the listener will be able to guess the right word regardless of tones. This is true even if you just ask people to write down what you’re saying in general, simply because they know that there’s only one common word with those syllables. For example, if you say féijí instead of fēijī, your friend will immediately think of an airplane because there’s really no good alternative.

Here’s how you can compensate by making something up:

Please note that this can take a little bit of getting used to even for a native speaker, but that it really does work. At first, it feels a bit weird to say bǎbā because it does’t mean anything, but that’s okay. Work your way through the jumbled lists and read each tone combination using nonsense words.

I have tried this with several different native speakers and it’s perfectly possible to get a 100% score even when using all 20 tone pairs using all three variants above! It’s not easy, though, and like I said, you probably should start with only one column or one row, then take the next one and so on, until you can expand to more thane one at once.

Get the most out of the feedback you receive

You can use more than just the answer to figure out how good your pronunciation is. If your friend immediately points to the right word with confidence, it’s quite likely that your pronunciation is not just okay, but actually clear. If she instead hesitates and don’t look at all confident, it could just be a wild guess, so a right answer might not be worth much.

Similarly, when you listen, pay attention to how difficult you think it is to identify the sound or tone spoken. This is obviously easier than trying to read your friend’s reactions, and it should be immediately obvious if a specific pair causes you trouble. There’s no point at all in guess here, so if you don’t know the right answer, just note it down as wrong without guessing!

You can collect as much data about your pronunciation and perception as you want this way, then try to analyse what your biggest problems are and which areas are already quite good. This can be very simple, just noting that you got the third tone wrong a lot, or more serious where you add up numbers and check each combination carefully. If you want a really deep dive, I suggest you check out the version of the pronunciation course that includes feedback, as that contains more data than most students want. Here’s a sample of what the feedback looks like (the first two pages out of six in total): 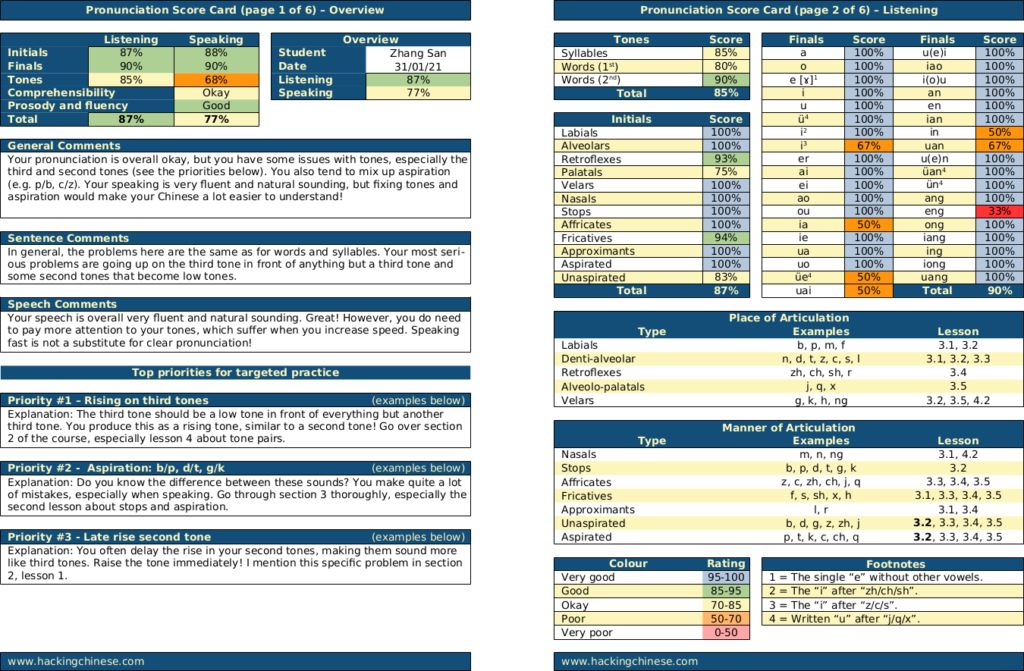 Tone pairs to practise with

If you want to practise with real words, I have collected and sorted a very large number of HSK words based on their tones in the article below. You can find all words that have first tone plus first tone, third tone + fourth tone or whatever combination you want! This is excellent once you know what you need to practise so that you spend more time with words you have already learnt or that are useful to learn.

Focusing on tone pairs to improve your Mandarin pronunciation

Focusing on tone pairs to improve your Mandarin pronunciation

In this article, I have used tones and tone pairs to show how to use minimal pairs (or triplets or whatever you fancy), but you can of course use it for any situation where words differ in only one regard. Here are a few examples:

Any sounds that are close to each other in pronunciation can be used, which means you can do this in English as well. Here are some words if you want to torment your Chinese friends (these are usually really hard for them):

Some limitations and caveats

There are some limitations to this method, though, so let’s discuss a few of them:

Conclusion: A smart method for discovering problems with Chinese tones

I wish someone had introduced this method to me when I started studying Chinese, not after trying it out on my own after studying for two years. I’ve spent an enormous amount of time and energy to correct my pronunciation (especially the third tone; see this article) and if I would have known about my problems earlier, it would also have been a lot easier to correct them.

I used this method regularly to confirm that my pronunciation and tones are good. I’ve also used it when teaching to help students identify their own problems, which they often can.

What about you, have you tried something similar? What did you learn?

If you haven’t tried it yet, I really think you should!

Editor’s note: This article, originally from 2011, was rewritten (almost) from scratch in September 2021.