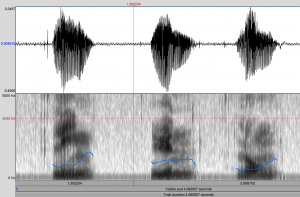 Let’s look at something similar, but which isn’t related to tones. Sounds influence each other when they appear next to each other in languages in general, and one of the ways they can do so is to blend together or at least become more similar. This is called “assimilation” in phonology and is very common in rapid speech, even if native speakers usually aren’t aware of it.

For example, say 面包 (miànbāo), “bread”, and pay attention to the final consonant in the first syllable, -n. Don’t just look at the Pinyin, say it in a relaxed, fluid manner (don’t enunciate in an exaggerated way). You may or may not have noticed that the consonant is [m], not [n], as the spelling indicates. That’s because [b] in the following syllable is a bilabial plosive (a stop produced with both lips), and [m] is also bilabial (but not a plosive). What happens is that the sounds are pronunced in a similar way to make the word easier to say. In fact, pronouncing it with a clear “n” harder and feels awkward.

So, the point is that while you can say “miàn-bāo” and “input”, it’s easier to say “miàm-bāo” and “im-put”. The same goes for saying 第二次世界大战 with full fourth tones on every syllable. Or saying my name in Chinese (凌雲龍) with full second tones on every syllable. Doing so is not wrong and when enunciating clearly, it’s not uncommon, but in normal, rapid speech, sound do influence each other a lot.

There are two types of tone change rules in Mandarin from a student perspective. The first, obligatory tone change rules, is essential and you absolutely have to master all these cases to perfection. The second one, optional tone change rules, is also important if you want to sound natural when you speak, but most people tend to get it right without really trying. So don’t freak out about them: know that they’re there and speak/mimic more and you’ll be fine!