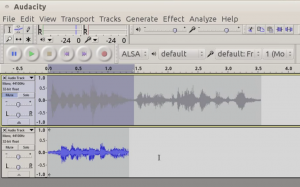 If I were to pick one activity that language learners across the world should do more in order to improve their speaking in general and their pronunciation in particular, it would be mimicking native speakers.

Mimicking is the single most powerful way of learning all sorts of things about how Mandarin (or any other language) is spoken, including basic pronunciation, tones, prosody (including intonation) and even vocabulary, grammar and fluency in general.

Yet none of the teachers I’ve had in the 20 and some years I’ve learnt foreign languages has suggested this activity or used it in the classroom. This is a pity, because it’s not only an effective way of learning, it’s also free and easy to do.

All you need is a suitable target model, a decent audio recording and editing program, along with some time and dedication. Professional feedback and help is of course good, but mimicking can be useful even without that.

The benefits of close mimicking

So, what do I mean when I say mimic native speakers? In essence, it means choosing a target audio clip and then doing everything you can to produce a perfect copy of it in your own voice.

This is useful for a number of reasons. It encourages you to study speech closely, transcribe speech, study vocabulary and grammar and so on. Moreover, It’s one of the best ways to study intonation. Finally, it’s cheap and requires relatively little feedback compared to other methods dealing with pronunciation.

Detailed instructions for how to learn Chinese by mimicking

There are of course many ways of mimicking, from spontaneously repeating after a native speaker to more rigorous ways of using mimicking to study. In this article, I will focus on the latter, but feel free to remove steps and make it simpler if you wish. Below, I have broken down the process for you:

Then, for each snippet:

This looks like a complicated process, but it really is very simple. As mentioned above, the goal is to produce your own version of something a native speaker has said. I show an example of this in a video I produced a few years ago. Unfortunately, there’s a very annoying buzz in the background, but you can still check it out here if you want. The mimicking bit starts at 4:42:

This week’s article is very practical. If you haven’t tried mimicking native speakers in this way yet, why don’t you put that at the top of your list of next actions for learning Chinese? Dedicate 20-30 minutes to this activity and see how far you can get!