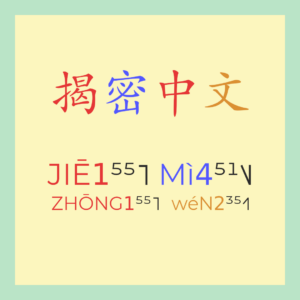 The sounds of Mandarin and the symbols we use to write them down are two different things. We can see this reflected in the different systems used to write down pronunciation, such as Hànyǔ Pīnyīn, Zhùyīn Fúhào (Bopomofo) and the International Phonetic Alphabet (IPA), among others. The sounds of the spoken language are the same, but each system sues different symbols to write them.

When it comes to tones, there’s one standard way to write them for each system, but there are also many other ways of writing down the tones in Mandarin. In this article, we will look at seven different ways of writing tones and discuss what pros and cons they have for learners of the language.

What’s the difference between Chinese pronunciation and Pinyin? Does it matter?

Here are seven ways to write tones in Mandarin with one example for each, using the title of this website 揭密中文 (Hacking Chinese) in Pinyin (whenever possible or relevant):

Some of these are by their very nature restricted to a certain transcription system, others are merely associated with one by tradition. For example, the tonal spelling in Gwoyeu Romatzyh can’t be used with Zhuyin, but colour can be used in combination with any other system, including the characters themselves. You can use the IPA tone letters with Pinyin (as I have done above), but this is very rare, as people would normally use IPA notation for the syllables too.

For a more in-depth discussion of the transcription systems themselves, please see this series of articles: Learning to pronounce Mandarin with Pinyin, Zhuyin and IPA

For students, the most familiar way to represent tones is using tone marks. These are diacritic marks put above the main vowel in each syllable. The marks are mostly visual representations of the tone, but you have to remember that tone change (tone sandhi) is not shown. For example, in xiǎngyào (想要, “to want”), xiǎng is a low tone, but in xiǎngfǎ (想法, “idea; way of thinking), xiǎng is a rising tone. Read more about the third tone here if this confuses you.

When talking about tones, the most commonly used method is to number them from one to four, so first tone, second tone, third tone and fourth tone. In Chinese, this would be dì yī shēng (第一聲), dì èr shēng (第二聲), dì sān shēng (第三声) and dì sì shēng (第四声). The neutral tone is often called just that, or qīngshēng (轻声), but if you want a number for it, use 0 or 5.

These numbers are also common in writing. For example, numbers are used like this in Wade-Giles, which is an older transcription system that has largely been replaced by Pinyin today. The numbers are normally written in superscript as shown in my example, but this notation isn’t very common with Pinyin. You can also see it written without superscript, so jie1mi4 zhong1wen2, especially when people want a quick way to write the tones.

In textbooks and research papers about phonology and phonetics, these numbers are also used when talking about tones in general, often with “tone” abbreviated to just “T”, so T1 for the first tone, T2 for the second tone and so on.

These numbers were introduced by Zhào Yuánrèn (趙元任), commonly written Yuan Ren Chao in English, to show tone height and tone contours using a numbered system from 1 to 5, with 1 being the lowest tone and 5 being the highest. By adding more than one number, a tone contour can be indicated, so a rising tone in Mandarin is 35 and a falling tone is 51. These are usually written in superscript, so for example wen³⁵ (文) and mi⁵¹ (密).

It’s worth pointing out that there can be some confusion here, because linguists studying Mesoamerican and African languages sometimes use the same scale, but in reverse, with 1 being the highest tone and 5 being the lowest. When it comes to Chinese languages, though, 1 always means low and 5 always means high.

This is the first method we use that is normally only used to show actual pronunciation. If you just want to show that xiǎngyào (想要, “to want”) consists of a third tone and a fourth tone, just write with tone numbers, but if the goal is to describe actual pronunciation, writing xiang²¹yao⁵¹ is clearly more informative, as the low tone (actually low-falling) is clearly visible.

Tone letters are a way of mapping tones to the height of a line of text, allowing for visual representation of tones in running text. Chao added a vertical bar as a reference, so with this system, we get:

These can also be combined to form tone contours, so the four tones in Mandarin are written:

Colour has been used to present tones in Mandarin for a long time and there are now many rivalling colour schemes. While the advantages are not as clear as they might seem at first, colour can make tones clearer, provided that you get completely familiar with one and only one system.

I have written a separate article about colouring tones that goes through all the arguments and also provides links to tools you can use to make your learning more colourful: Does using colour to represent Mandarin tones make them easier to learn?

Gwoyeu Romatzyh (GR) is a romanisation system also invented by Yuen Ren Chao (he’s famous for a reason, and we’ve barely scratched on the surface of his contributions to Chinese linguistics). The idea is that since tones are integral parts of Chinese syllables, they should be integrated into the spelling of the words. As you can see from the example above, there are no tone marks, numbers or other symbols. An uninitiated reader might assume tones are not represented, but they are!

Normally in GR, the first tone is the basic form of the word, then the spelling changes for the other tones (I show Pinyin in brackets below):

The complete set of spelling rules is rather complicated, so I’m not going to go into details here, but check out this article on Wikipedia or play around with this converter.

This system was introduced by Terry Waltz with the goal of creating a system that is as transparent as possible for students. The full version uses the tone marks from standard Pinyin and a colour scheme, but the new innovation here is to use the size of the letters to indicate tone height. Upper case means high, and lower case means low. So for example, the first tone is written with all upper case letters (ZHONG) and the second tone is written first with lower case then upper case to indicate a rising tone (weN). Neutral tones are marked with an asterisk, since all lower case letters are used to indicate a low tone.

Below, I evaluate this system as a pedagogical tool focusing on the upper and lower case letters, not colours and tone marks that I have already discussed.

Wrapping up: One system to rule them all?

Tones are complex, so no wonder that people have come up with a plethora of ways of writing them down. There are even more methods than the ones I’ve shown here, such as the old system from Middle Chinese that is sometimes used in modern Mandarin too. You might for example hear people refer to the first tone as yīnpíng (陰平), the second tone as yángpíng (阴平), the third tone as shǎng (上) and the fourth tone as qù (去). There are also more obscure systems I either haven’t found or decided to exclude for one reason or another.

So, is there a best way to write down tones? That depends on the purpose of writing the tones. If you just want to show someone who knows Chinese what tone a syllable has, most of the methods shown here are massive overkill; just use a number or a tone mark. If you’re teaching complete beginners, then the situation is quite different: your goal is to teach them pronunciation rather than just let them know which tone a syllable should have. If you’re a phonetician, you need to be able to write about tones more precisely than most of the commonly used systems allow for.

And so on. I think all the systems we’ve looked at today have some merit and can be used in particular situations. My hope is that by discussing various ways of writing tones, you”ll be able to find a way that suits your needs, whether your a student or teacher.

Which of these do you like the best? Or is there maybe one that you really can’t stand? Please let me know in the comments! If you know of some innovative way of writing tones that I haven’t shown here, I’d be delighted to hear about that too!