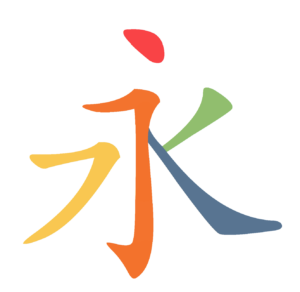 I’ve been teaching beginner courses in Chinese for more than ten years, but I still remember what it was like to write my first characters.

When learning almost any other language, writing by hand is not a challenge in itself. Sure, there’s spelling and other things to learn, but that’s at least in principle familiar from other languages we know. Writing Chinese characters is a different beast altogether.

So what do you do if your teacher asks you to learn a bunch of characters until tomorrow or later this week?

From drawing pictures to writing characters

Before we start, I want to say a few words of encouragement. Learning Chinese characters as a beginner is challenging, mostly because everything is new and you can’t connect what you need to learn to things you already know. Writing characters is essentially like drawing stylised pictures.

The more you learn, however, the more extensive your web of Chinese knowledge will become, which also means that expanding it further will become easier. The more you know, the easier it becomes to learn even more. You will start recognising components and understand how the fit together to form compounds.

Thus, if you feel that it’s difficult and frustrating at the moment, don’t worry, it will become easier soon! It might feel like you’re drawing pictures, but as your understanding of Chinese characters increases, you will be writing characters soon enough.

For general advice about learning Chinese characters beyond the specific situation we’re looking at in this article, please refer to My best advice on how to learn Chinese characters. It contains in-depth discussions about how the Chinese writing system works, methods for learning characters, and how to remember and review characters effectively.

My best advice on how to learn Chinese characters

As a beginner, you don’t have time to read all that now, though, especially not if you have a test soon, so let’s talk about that! If you have time to spare, investing more of it into understanding Chinese characters is always good, but not always practical. I’ll return to this later, but let’s go through the basics first.

8 principles for learning Chinese characters as a beginner

Here are eight practical principles for how to learn to write Chinese characters:

Learning Chinese characters as a beginner: Beyond the first encounter

The above advice should be enough to help you survive the small but regular tests that are probably sprinkled all over your course schedule. However, the strategies that help you in the short term will not suffice in the long term. I have already recommend my article about general advice for learning Chinese characters above, but beyond that, it’s important that you get to know the Chinese writing system and understand how it works. Learning meaningless things is both hard and tedious, so if you familiarise yourself with the basic principles that underlie all characters, everything will become much easier. In the best of worlds, teachers should explain these things, but this is far from always the case. Thus, I’ve written a series of articles about this, starting here: The building blocks of Chinese, part 1: Chinese characters and words in a nutshell

Learning to write and read in Chinese takes a lot of time and effort, but it’s not as hard as it might seem at first. Sticking to the advice in this article will prevent you from making some of the more egregious mistakes. Good luck!

I have built an entire course meant to help you get off to a good start with your Chinese studies. It’s called Unlocking Chinese and you can check it out here.