Spaced repetition means that you review words you want to learn at certain intervals to maximise learning efficiency. It is a well known psychological phenomenon that repetition is much more efficient when spread out compared to when its massed together.

Since this involves keeping track of much data, a computer program is needed to handle it properly. In this article, I’m going to argue that spaced repetition software is the best thing since sliced bread, and that it’s a must in the long run for any serious learner. 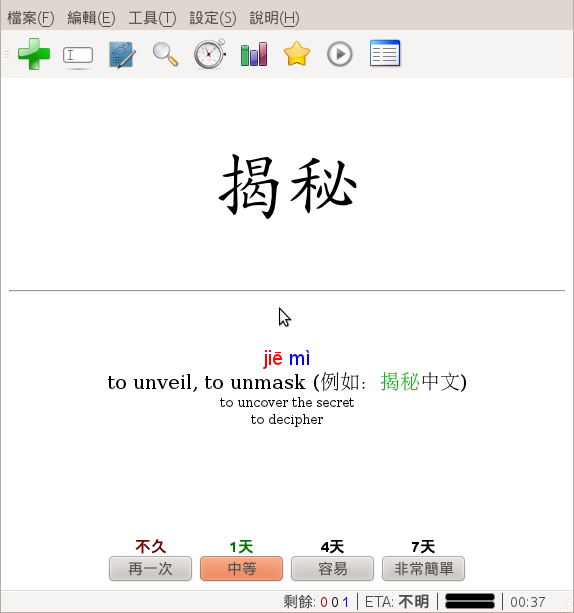 More amazing still, I only spend about 30 minutes a day maintaining vocabulary. I don’t say this to boast, I say this because I know for a fact that you can, too, if you just use the proper tools.

Learning languages is different from learning many other subjects in that almost everything we learn are built on something we already know.

At beginner and intermediate levels, we can never study an area and, when we’re done, just leave it. We need to learn and we need to remember what we learn even after the exam. This is perhaps true for all subjects, but it’s crucial when learning languages. Is it possible to remember every word you’ve ever studied? Of course it is! It isn’t even hard.

The problem: Reviewing everything takes too much time

With a traditional approach, it would probably be impossible for us to remember almost every word we’ve studied. To do that, you would constantly have to go back and review chapters you’ve studied before, but as the number of chapters grows larger and larger, this would become a hopeless task. Then think of all the words you’ve learnt, but that aren’t in ordinary textbooks.

Reviewing old chapters and vocabulary lists, you waste a lot of time studying words you already know and don’t need to review, just to find those few words you actually needed to revise. This is what makes the traditional approach useless when you move beyond the beginner level.

You could also read or listen to an awful lot of Chinese and make sure you review words that way, but the amount of time you need to do this successfully is truly staggering. Using spaced repetition software doesn’t mean you should stop listening and reading, of course.

Spaced repetition software takes care of the problem of forgetting. Each word is assigned an interval, starting at zero. This means that the time remaining until you should review this word is zero, i.e. you should do it now. The program will then give you the word as a flashcard question and if you can answer it correctly, the interval will be increased.

The more times you answer correctly, the longer the interval until next time you have to review the word. Thus, words you know well and don’t forget will quickly be assigned very long intervals (months, years), so you won’t be bothered by them and can instead focus on words you find hard.

These intervals aren’t random! In most programs (see below), they are based on research done on vocabulary acquisition, so this will make learning even more efficient.

The point is of course that words you don’t know, i.e. flashcards you answer incorrectly, will have their intervals shortened, probably down to zero again. In effect, this means that you’ve forgotten the word and need to learn it again. You will see the words you’re having problems with all the time, which allows you to learn them properly.

For a simulation of the difference between traditional and spaced review, check this animation:

This saves a huge amount of time. In fact, it saves so much time that something that would otherwise be impossible (such as reviewing everything you’ve ever studied) becomes possible. As I said above, I have more than 20 000 characters and words altogether. Yet, looking at the statistics from the program I’m using, I spend on average only 30-40 minutes every day reviewing vocabulary!

For a student with average mental faculties, this would be utterly impossible to achieve without the help of spaced repetition software. With this tool at your disposal and some determination and staying power, it’s not difficult to achieve.

Of course, if you’re a beginner or intermediate student, your deck will be much, much smaller. You will need to spend more time on each word, but at least you will make sure you’re not forgetting what you’ve spent so much effort learning.

What to do next?

If you’ve followed the above argument, you should be eager to install some kind of spaced repetition software. There are many of these and I’m not going to start a detailed discussion about their merits and flaws, but in my opinion, a program called Anki is the best choice and it’s also free.

It allows you to do everything I’ve said here and much, much more. You can also use it for other subjects (other languages, geography, law, whatever). It also provides a web version you can use to synchronise your flashcard on different computers or smart phones.

In addition, there are a variety of other programs out there and I’m simply going to list them so you can try them out if you want to:

Of these, Pleco and Skritter are developed specifically for Chinese. Skritter is the only alternative that focuses mainly on handwriting.

A word of warning

Even though spaced repetition software is very useful, it’s not a panacea. You won’t reach a high level of proficiency by focusing only on relatively isolated parts of a language. Reading and listening is important to learn how words are used, and writing and speaking are necessary if you hope to use these words yourself!