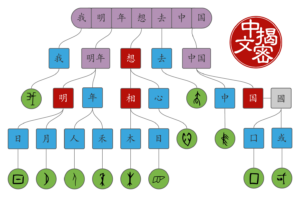 Learning to read and write Chinese characters is a unique challenge. To be able to read normal text in Chinese, you need to know around 3,500 characters, even though the exact number depends on what you are reading, and there’s more to reading than just knowing characters. It should be clear to anyone that this is not an alphabet, then, and that Chinese characters do not represent sounds the way our letters do.

That doesn’t mean that Chinese characters are pictures, though, even if it is true that many basic characters started out as such. It’s not too hard to imagine that 木 (mù) shows a tree, or that 人 (rén) is a sideways view of a person.

The letters in our alphabet had similar origins, but we only use them to represent sounds these days. In contrast, there’s nothing in 木 or 人 that hints at their pronunciation. You just have to learn that, just like you need to learn that the numeral 6 is read “six” and that $ is read “dollar”, you can’t know that by just looking at the written form.

Chinese characters are not pictures

Most characters are not simple pictures, though. Instead, they are combinations of other characters, which means that a very large majority of those 3,500 characters we might be our long-term goal aren’t actually unique symbols you need to memorise, but are rather combinations of a smaller set of components.

To continue our example above, the character for “to rest”, 休 (xiū), shows a version of person 人 (rén) next to a tree 木 (mù), suggesting the idea of resting in the shade of a tree. Another example is putting two bright objects, namely the sun 日 (rì) and the moon 月 (yuè) next to each other to form the character for “bright”, 明 (míng). There are also other types of compounds we will get to later.

To learn to read or write, you need to go beyond individual characters, though, because most words in modern Chinese consist of two characters, not combined into a new character like 休 (xīu) above, but just written next to each other. For example, the word for “China”, 中国 (zhōngguó) consists of two characters: the characters for “middle”, 中 (zhōng) and “country; kingdom”, 国 (guó).

Other cases are less obvious, such as “next year”, 明年 (míngnián), consisting of “bright”, 明 (míng) and “year”, 年 (nián). Note that in Chinese, there’s an almost perfect 1:1 correspondence between characters and syllables, so a two-syllable word will be written with two characters.

Thus, learning to read and write Chinese characters is done on several levels. These are not steps where you have to complete one before advancing to the next, but parallel processes all learners work with all the time when learning Chinese. 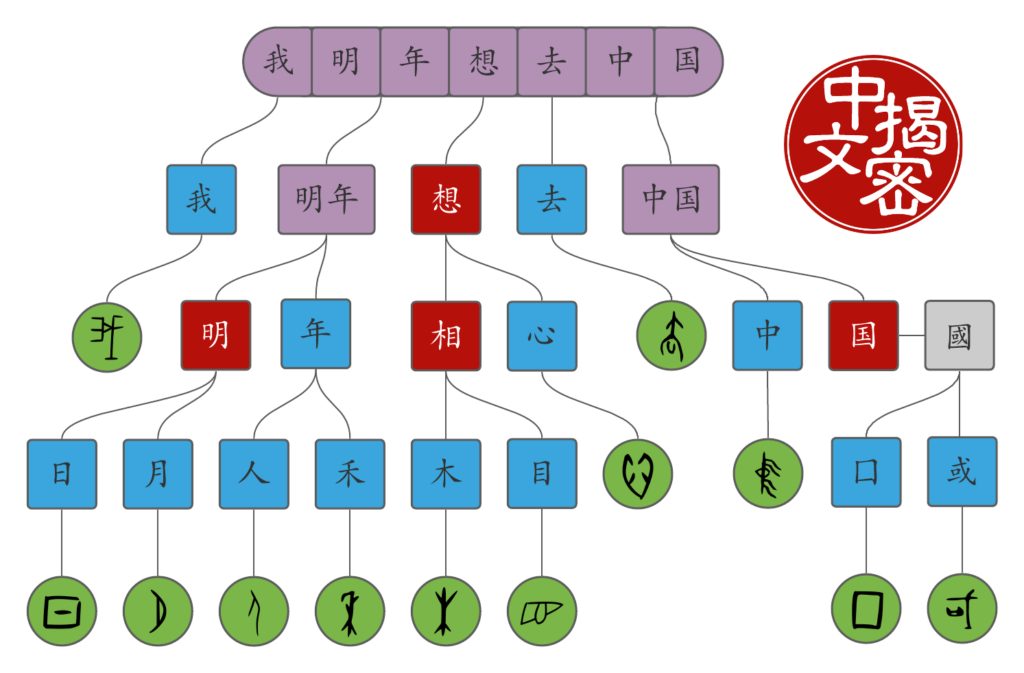 In order to learn to read and write, you need to:

Here’s a list of all the articles in the series:

In this series, I will go through the above processes with the goal of explaining how written Chinese works and how to approach characters as a student. I will try to stick to the most important things, but will provide links to more reading for those who want to know more.  When you’ve finished this series of articles, you should know not just how characters work, but also what characters to learn and how to go about it!

If you prefer to watch a video course talking about these concepts in much more detail, I invested a lot of time in creating a video course about Chinese characters for beginners over at Skritter, where you can also practise writing the characters. Accessing the course requires a subscription, but you can get 10% off by using this link when signing up on the website. If you want to stick to free stuff, this article and the rest in this series are completely free, as are more than 400 other articles here on Hacking Chinese! Here’s a trailer for the character course:

Before we get into learning characters, though, I want to say some general things about learning written Chinese and some things you should keep in mind when reading the rest of the series.

Learning written Chinese: Building a house from the bottom up

The real problem you face when reading Chinese is the opposite, though, where the house is already finished and you need to break it down in order to make sense of a text. However, the goal here is to explain the writing system in general, rather than understanding a specific text, and then a bottom-up explanation makes more sense for most learners.

The best way to learn to read is to read

It’s important to not go on tilt and invest all your time into learning individual characters. The goal is to learn to read and/or write Chinese, not to memorise vocabulary for its own sake.  Both reading and writing are very complex processes that can’t be reduced to just a number, even if it is very tempting.

What I’ve found works best, and is what most research into both reading and vocabulary acquisition supports, is to combine input (reading and listening) with targeted vocabulary practice. Input here should be comprehensible, meaning that you should be able to understand as much as possible. As a beginner, you won’t be able to find texts you can read without lots of support, but do your best to find easy texts. Using one or more textbooks is fine, but you can also find lots of free reading resources here: The 10 best free Chinese reading resources for beginner, intermediate and advanced learners

Vocabulary practice can involve many things, but here I include anything that relates to characters and words that isn’t directly linked to practical communication. For example, learning about the origin of a Chinese character or the composition of a compound can make it easier to remember, but looking things like that up doesn’t count as reading practice. Reading this series of articles doesn’t count as reading practice either, but my hope is that it will boost your learning significantly by making learning meaningful, which has been shown over and over to be essential for learning in general.

It’s also important to understand that the difference between knowing how to read Chinese and being able to write it by hand is much bigger than the same difference is in English. Reading requires you to be able to passively recognise characters in context, but writing by hand requires you to be able to actively recall every detail of every character. Typing usually works by writing how something is pronounced and then making sure the input method chooses the right characters (which it usually does), so it’s more akin to reading than writing by hand.

This raises the question of whether you really need to learn to write by hand at all, as it takes much more effort and is unlikely to be of much practical use. The short answer is that you probably should learn to write the most common characters by hand, if for no other reason than getting a good grasp of how characters work, but that in the long run, most students would be okay with just reading and typing. If you feel that this answer is not enough, you can read more in this article: Is it necessary to learn to write Chinese characters by hand?

So the answer is that it depends on your goals for learning, but that you shouldn’t feel compelled to write by hand everything you can read.

What you don’t need to learn: Traps to avoid

Most people will only tell you what to learn, but sometimes knowing what not to learn can be even more useful and save you a lot of time and frustration. Here is a short list of things related to Chinese writing that you can safely save for later or avoid completely:

These points all came from this article: How to not teach Chinese characters to beginners: A 12-step approach.

We’ve now reached the end of this introductory article. In the next article in this series, we will start by looking at basic characters and components. As we shall see, learning a few hundred fairly simple characters will unlock the Chinese writing system and make it possible to learn thousands of characters. Read the next article here: