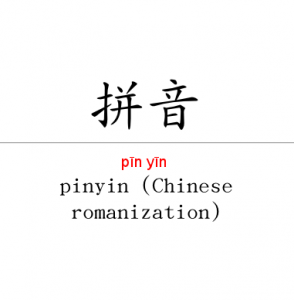 Learning to pronounce Chinese properly comes with a number of challenges, some of which all learners of foreign languages encounter. In general, we need to learn two things.

First, we have to learn how to pronounce and distinguish sounds that don’t exist in our own language. It is only natural that we find this difficult sometimes. We also need to understand tones and intonation, both being quite different in Chinese and English. With practise and a good teacher, these challenges can be overcome.

Second, we need to learn how these sounds are written. Most importantly, learning how to write sounds enable us to study pronunciation properly. It’s also more or less a requirement in modern society, because most Chinese input methods on computers and phones are based on typing the sounds rather than the characters. The currently dominating romanisation system is called Hanyu Pinyin (汉语拼音), but there are many others. I will write about other romanisation systems in other articles, but since Hanyu Pinyin (henceforth just Pinyin) is completely dominating, that’s what this first article is about.

This is a guide, not a rant

In this article, I don’t intend to argue that Pinyin is better or worse than any other system. Instead, I’m going to focus on some of the traps and pitfalls that students might fall into while learning Pinyin. In other words, I will highlight some tricky parts that I know from experience that students find difficult (I have taught a number of beginner classes in Chinese).

I intend to discuss these problems so that we can learn how to overcome them. This article is for any student who is learning or who has learnt Pinyin. Some of the things I mention below took a long time before I noticed or read about, so even advanced learners might find this interesting.

Learning pronunciation as a beginner

Before I start going into details, I want to say a few words about learning to pronounce Chinese as a beginner. Learning proper pronunciation is a matter of taking responsibility. If you’ve just started learning Chinese, your teacher will probably help you a lot, but the likelihood is that you won’t receive as much help once you’ve learnt the basics. Don’t forget: If your teacher doesn’t correct your pronunciation, this is most likely not because your pronunciation is perfect. You have to ask specifically for some teachers to keep on correcting you beyond the stage where you can make yourself understood. Likewise, if native speakers praise your Chinese, be happy, but don’t use it as an assessment of your actual ability.

Your teacher should have already told you what I’m going to bring up in this article, but since I know that many teachers don’t do that and that many students still make these mistakes, I think these problems are worth highlighting. Also, some students learn on their own without a teacher.

The list of issues below isn’t exhaustive, but I have tried to include those problems that learners are likely to be less aware of. Thus, I have not included “i”, “u” and “ü” changing at the beginning of syllables (to “y”, “w” and “yu” respectively), since I think most people will have already learnt this in their first week in class. The definition of “less aware of” is very vague, though, so if you have suggestions for additional issues, let me know!

Some caveats and warnings

Please note that these problems usually arise because of a poor understanding of Pinyin. This might be because the teacher doesn’t explain well enough, because the textbook is bad or the student isn’t paying attention. It doesn’t really matter which, the important thing is that there are some problems and those need to be addressed.

Something should also be said about dialects. Mandarin is spoken by hundreds of millions of people over a vast area. Naturally, there is a lot of variation going on. I’m not writing this article to say that all other variants of Mandarin are useless or bad in any way. Still, I think most people should and want to learn standard pronunciation to start with, even if I encourage people to experiment with dialects later on.

I have sorted this guide into several areas:

For sound references, there are any number of sites out there to help you:

Most of the phonetic symbols I use here are from San Duanmu’s The Phonology of Standard Chinese, a book I thoroughly recommend. I have included some samples here as well, thanks to Zoe for those! In case you’re curious about the dialect, she’s a teacher from Beijing.

Spelt iu, pronounced iou – The syllables diu, liu, niu, etc. are pronounced as -iou and should rhyme with e.g. 有 (“have”), so you and liu using phonetic symbols are written as [jəu] and [ljəu] respectively. Just don’t forget the -ou sound and you’ll be fine. For a more detailed discussion of this sound, check my answer here.

Spelt un, pronounced uen – Syllables such as lun, dun, shun, zhun and so on are all pronounced almost as diphthongs (double vowel sounds). Using IPA, sun would thus be written [swən], but it might help to think of this as su + en. Don’t forget the rounding of the lips on [w]. Listen (lun, dun).

The syllables bo, po, mo, fo are actually pronounced buo, puo, muo, fuo (listen), which means that they rhyme with duo, tuo, nuo, luo and so on (listen and compare). Using IPA, this sound is written [woo]. For example, bo and duo are written as [pwoo] and [twoo] respectively. As we can see, these syllables rhyme.

Vowel overlap (one vowel, many sounds)

e – This letter is actually pronounced in three different ways (or four if you want to be picky). First, in final position and when it’s the only vowel, it is a close-mid back vowel [ɤ]. Second, following an i, such as in lie, die or xie, it becomes a close mid front vowel instead, [e] (note: sometimes the “e” in e.g. mei and mie are rendered differently, with the second using [ɛ]). Third, before the nasals -n and -ng it becomes central vowel, [ə]. Compare (listen): le [lɤ], lie [ljee] and leng [ləŋ].

i – The letter i represents some wildly different sounds in Mandarin. First, it’s a front closed vowel [i] and occurs in: mi, bi, ti etc (listen). Second, it can be pronounced further back and slightly more open [ɪ] in -ai and -wai. Third, i represents the empty rhyme following z, c and s (this sound can be described in many ways, but it’s fairly close to English [z]). If it helps, think of these sounds as zz, cz and sz (listen to the first three syllables). Fourth, it also represents the sound following zh, ch and sh. This is the same as the previous sound, but pronounced in the retroflex position (i.e., the tongue is retracted and raised as when producing the zh, ch, sh sounds; the tongue doesn’t move much). This sound is also fairly close to a thick, retroflex r, so it’s possible to think of these sounds as zhr, chr and shr (listen to the last three syllables and compare). Be careful not to insert another vowel sound between these! Many students pronounce zhi as zher or zhe.

These pairs cause problems, because many students look at the spelling and see the same letter and therefore conclude that the vowel sound in -in is identical to the vowel sound in -ing. This is not the case. In standard pronunciation, the quality of the vowel sound is different in e.g. yin and ying. The first only contains a single vowel sound, whereas the second is a combination of i and -en and is almost pronounced as a diphthong. Compare (listen): yin [in] and ying [jəŋ].

In the case of -an/-ang and -en/-eng, it you can clearly hear that the nasal [ŋ] influences the preceding vowel. Listen and note that the sound is farther back in the second word in these two pairs: lan, lang and ben, beng.

Actually, the way -n and -ng are pronounced causes some problems, because it’s not entirely the same as in English. The -n is close enough, but the -ng is pronounced much farther back in Chinese than in English, making the difference between the sounds bigger. However, note that depending on region, many native speakers can’t distinguish these two phonemes and pronounce both as -n.

The difference between the following consonants in Mandarin is aspiration (i.e. followed by a puff of air), which is usually written as superscript h with phonetic symbols. This is different from English, where voicing is part of the difference. In Mandarin, the first consonant is not aspirated, the second is aspirated:

Note that none of these consonants are voiced! If you put your fingers to your throat, you should not feel the vocal cords vibrating as when you say [z] in English. In fact, no consonants or glides in Mandarin are voiced, except these:

Why so many inconsistencies?

After a while, most students ask themselves this question. Why all the irregularities? It’s easy to explain why English spelling is irregular (it wasn’t designed, it has evolved for over a thousand years), but Pinyin is a relatively modern invention. I’m not going to go into details here, but I just want to point out that there are explanations for most oddities, which means that they aren’t really oddities at all.

I’ll give you three examples:

I have taught Mandarin pronunciation a lot, both to individuals and in bigger classes. Most of the things I’ve written here I have found out along the way, some things at the very beginning, others much later, sometimes by reading up on phonetics. I hope this guide will help you to improve your pronunciation in Chinese!