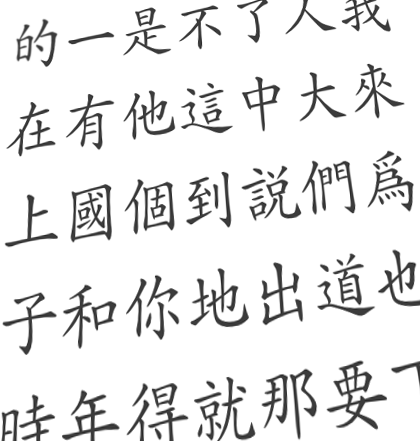 Before reading this article, I assume that you have already started building the first part of your toolkit for learning Chinese, i.e. you have to know about radicals and character components. If you haven’t, read the first article here about the toolkit hereon Hacking Chinese.

Some characters, such as many radicals or some simplified characters, have very few strokes. Sometimes, they are pictures or represent logical concepts and these cases are easy to learn as long as you know what the character means. For instance, remembering that 一 means one and 人 means human is fairly obvious.

If you can’t figure it out just by looking at it (which you rarely can), head over to Zhongewen.com or Yellow Bridge and find the character you’re looking for. As soon as you’ve seen the logic behind the character, it becomes reasonably easy to remember that 下 means under, 上 means over and 大 means big (click the characters to follow links that will explain them). Even non-obvious explanations might help, such as for the character 水 (water). It’s probably impossible to guess the meaning of this character based only on what it looks like, but it’s not that hard to see it once you know the answer. Thus, knowing what a character represents is essential for remembering.

However, there are cases where the etymology is unhelpful, so you often have to come up with a mnemonic of your own to remember the character. This might also happen for some simplified characters which have simply lost their original moaning. It doesn’t matter what kind of trick you use to remember the character, anything goes as long as it help you remember it. It’s pointless to learn the real etymology of a character if it doesn’t help you remembering it!

Learning characters with many components

Most of the characters you will learn are fairly complex; they consist of many different parts that together make up a single character. This is even more true if you study traditional characters, but remember that most characters aren’t simplified at all and most of those that are still might be fairly complex (see this article for more about simplified and traditional Chinese). To learn these, you need to know what the component parts mean and then link them together using memory techniques. Again, you don’t need to care too much about the real origin of the word, as long as you use the real meaning of the component parts, you’re on the right track.

Here are three examples to show you how powerful this method can be:

This character consists of three parts: 禾 (grain), 火 (fire) and 心 (heart). The two first are combined into 秋 (autumn). This is in reality a phonetic combination, but it’s easy (at least for me as a Swede) to see how plants in nature turn into fire as autumn approaches. According to the dictionary, the combination “autumn” added to “heart” is also phonetic (秋 and 愁 are pronounced similarly), but again, we don’t really care about that now. Doesn’t feeling like there’s autumn in your heart mean that you’re sorrowful? Approaching winter is also a reason to worry, especially if your harvest has burnt down.

This is a character that has a useful mnemonic in it already, you don’t need to come up with something on your own. The character is constituted by two component parts 正 (correct) and 攵 (strike), so who, if not the government, corrects bad behaviour by hitting people? It might be a cynical view of the state, but the image is easy to understand and remember. Since this is what we’re after, this is a good association.

The component parts are 山 (mountain), 豆 (bean) and 見 (see). The real origin of the word involves combining “see” with another character that has a similar sound, but which meaning is completely unrelated. However, adding some humour to learning Chinese, it’s easy to create a new idiom: “the other man’s bean mountain is always taller”. Having come up with this mnemonic, I will never ever forget this character.

For the simple characters I’ve said that anything that helps you remember works. This is not true for complex characters with many parts. If you’ve just started studying Chinese and encounter a character which looks like a man wearing a hat, don’t create a mnemonic based on that. It will work for a while, but what you have to realise is that soon you will have fifty characters which all look like different people in various kinds of hats and the system breaks down completely. Also, you can’t create thousands of these pictures without going insane. The solution is to use the real meaning of the component parts and then make mnemonics based on those! Feel free to go crazy, but do it using a solid foundation.

Be creative, have fun!

When you’ve been creating these kinds of memory aids for yourself for a while, you will get very good at it. Take it easy in the beginning and have fun, try to find as cool mnemonics as you can and share them here! I think that my “the other man’s bean mountain is always taller” is almost unbeatable, but perhaps you’ve found something better for another character?