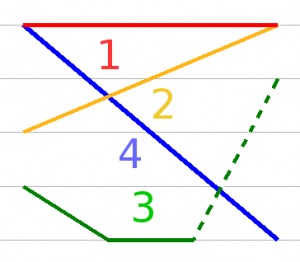 A syllable in Mandarin consists of three parts: initial, final and tone. All syllables have a final; that’s the vowel(s) and in some cases a nasal following the vowel (such as -ang or -iong). Most syllables also have an initial, which is the consonant sound(s) at the beginning of the word.

And then there is the tone.

For many students, tone are something extra that are added to words. This is indeed what it looks like in the most commonly used transcription systems (Pinyin and Zhuyin). The tone marks that are used float next to the characters and it’s easy to dismiss them as not important.

Actually, there are several transcription systems which do encode tone in the spelling instead of using a diacritic, but these are almost never used and I don’t think using them would help that much. If you’re curious though, check out Gwoyeu Romatzyh.

Many beginners, but sometimes also intermediate students, ask me if it’s really necessary to learn and remember the tones. Now, for a complete beginner, this is a fair question, but for anyone else, the answer should be obvious:

Yes, you have to learn the tones.

No buts, no excuses or nuances. You have to learn the tones. Not learning the tones would be like ignoring vowels. Tones has been shown to contain roughly as much information as vowels (but less than initials/finals).

Tones are important, regardless what you might feel or think about it!

If you are a student

You can deal with this in two ways:

Ignore tones at your own peril

The first option above is tempting. You might have heard a fellow student or perhaps even a native speaker say that tones aren’t actually that important in natural speech and that even native speakers don’t use them much. If that’s the case, why bother?

I’m sorry, but what you’ve been told is wrong. A fellow student telling this just means that she is in the same delusional realm as you are about to enter, just a bit further in. A native speaker telling you this is not surprising since native speakers without proper training isn’t very good at explaining their own language. It might indeed feel like tones aren’t important for them.

That’s because they are native speakers and don’t really pay much (conscious) attention to what they have learnt since before birth. This is not limited to Mandarin or pronunciation, of course.

Buckle down and learn the tones

That only leaves the second option: buckle down and learn the tones. It’s the only way you will achieve communicative competence in Chinese. You will of course be able to order beer and perform some other trivial tasks without caring too much about tones, but as the ability of the listener to guess what you want to say based on context declines, the importance of tones goes up. Try ordering a taxi to an obscure address while using the wrong tones and you’ll see what I mean.

So, accept it; embrace it! Them. The tones. They are an integral part of every syllable and word in Mandarin. You can’t ignore them. If you do, you just postpone the day when you realise that you have to go back and relearn everything (yes, this actually happens). If you don’t know the tone, you don’t know the word.

if you find it difficult to hear the difference between tones, I suggest that you read the following two articles:

Some guidelines for teachers

When teaching Mandarin, it’s important to help students realise the  importance of tones. Apart from telling them about it, which most teachers already do, they need to see how tones affect communication.

Remember, even though it’s easy for you to feel the difference between 买/卖, for most students, this pair probably sounds like the same word with a slight difference in nuance (sometimes and partly inherited from intonation in their native language). to show the differences , use common words that really does influence communication, such as 买/卖 or 醜/臭. Another good example is 老师/老实/老是. Start with perception (listening), then move on to production (speaking).

This is not enough, though, you also need to encourage students to learn and remember the tones. This is best done by making sure that your assessment and grading take tones into account.

If a student leaves out a tone, treat it similarly to missing a vowel. The same should apply if the tone is wrong. This way, students will quickly realise that they can’t just ignore tones. The worst thing you can do is to treat tone mistakes more leniently than other spelling or pronunciation mistakes since this strengthens the feeling that tones really aren’t that important.

Finally, don’t give up on tones. Some students take a long time to learn them and need constant reminders, although some might not appreciate receiving too much negative feedback, especially in front of the class.