A leech is something that drains time from your studying and will keep doing so until you do something about it. The most essential example would be a piece of vocabulary, let’s say a character, that just refuses to stick in your mind. Even though it has appeared numerous times in your spaced repetition program, you just can’t recall the correct answer, perhaps because it’s very difficult, perhaps for no readily apparent reason whatsoever.

What makes a particular word turn into a leech is very difficult to say, simply because it seems to be wildly different between different learners. Every learner I’ve talked to knows about leeches, although they might not use that word. This article is about how to deal with leeches.

Other articles on Hacking Chinese related to spaced repetition:

Leeches are harmless on their own, but deadly in packs 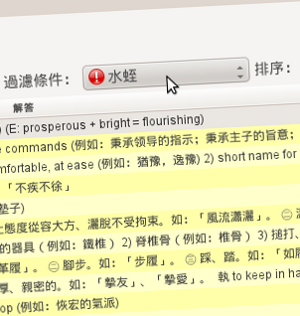 Fortunately, we don’t need to know exactly why a leech appears, we simply need to know how to recognise it and how to do deal with it. The reason for wanting to kill leeches should be obvious: Not only do they drain time since they require much more reviewing than other flashcards, they also create a sense of frustration when you always fail a certain flashcard. Speaking of flashcards, I’m more or less assuming that you are using spaced repetition software (Anki, for instance), but you will be able to benefit from this article even if you’re old-school and still rely on pen and paper.

The problem with leeches is treacherous. One leech might perhaps drain a couple of minutes study time, which is insignificant. However, if you let the number grow, the time that get sucked in by these bastards will quickly accumulate and start becoming a real problem. This is completely unnecessary.

How to spot leeches

Spotting leeches is in one regard very easy, but in another quite difficult. It’s easy because you often get a feeling that you forget a word very often, which means that it’s probably a leech. If you’re using Anki, there is a specific function that will identify leeches for you, which means that you don’t really have to think too much about it yourself.

The default setting for the definition of a leech is that the card has been failed 16 times, which is ridiculously high in my opinion; I’ve lowered the number to 8, but possibly you could lower it even more, down to 5 or so. When this number is reached, the card is suspended and you will have to manually do something about it. This is precisely what we want.

However, noticing leeches might sometimes be more difficult than that. What if there are three characters you often confuse or you’re simply too lenient when you correct yourself, so you fool yourself into believing that it’s not a problem? Being aware of leeches and having an active strategy to combat them is essential and will probably solve most problems related to identification.

So, you have identified a leech, but what do you do with it? It depends on what kind of leech it is. Characters that refuse to stick are usually the result of bad mnemonics. Go back and look at how the character is composed and see how you can create a new story or picture that will allow you to remember it. If it’s a multi-character word, the same is true: you need a new approach and a more vivid connection to allow you to remember the piece of vocabulary in question.

Confusing similar characters is a problem which might be a little bit harder to deal with and requires more effort. However, as I have argued elsewhere, knowing lots of individual characters is essential if you want to learn words really fast. If you have a series of characters you can’t distinguish, you have a flawed tool kit and your learning in general will also suffer. What I do in these situations is to compose a list of similar characters and then go through them systematically. Using a dictionary with a visual etymology tree is essential, because that way you can actually see similar characters right next to each other (see below). 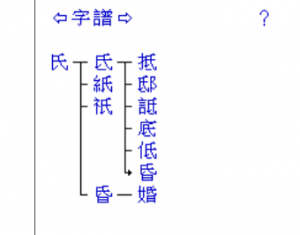 Let’s take the characters 氐, 抵, 诋, 底 and 低 as examples. They are all pronounced more or less the same (only 低 differs in that it’s first tone). I found it very hard to remember which one of these was which, so I looked at this page over at Zhongwen.com. Look at the right and you will see all the different characters that contains 氐. Going through all these and writing them down (preferably by hand) is a good way of killing related. I usually gather these collections on a single sheet of paper and then put that somewhere where I usually have spare time, like next to my bed, close to the table or in the bathroom.

Dealing with leeches is quite easy most of the time. Laziness is usually a bigger problem than a lack of ideas about or insight into how to solve the problem. What I do is that I mark or label potential leeches in some way and then ignore them for a while until I feel like I have the time and energy to deal with them. Then I spend an hour or so looking at them and weeding out any problems that might be lurking there. That way, I kill lots of leeches at once. Finish what you started before you go leech hunting.

The reason I say it’s stupid to be lazy is that you don’t save time by ignoring leeches, rather the opposite is true. Lowering the threshold of leeches in Anki will mean that you spend more time looking at character parts and killing leeches. However, this is not a waste of time, because it means that you actually learn something instead of just failing over and over. Not only is it good for your Chinese, it’s good for your self-confidence as well.

Giving up is (sometimes) an option

Even though it’s necessary to learn most words at some point and there probably is a reason why you have entered a specific word into you vocabulary list, it’s important to realise that you don’t always have to fight. Let’s say you have a word you’ve tried to learn a number of times but which simply just refuses to stick, regardless of mnemonics or any other strategy you try. In such a case, I ask myself: Do I really need this word? Is it commonly used? Can I do without it? If the answer is yes, just delete the card and get rid of the leech that way. Spend the time thus saved learning something else.

In any case, keep your eyes peeled for leeches! When you feel that you have a couple, take decisive action to get rid of them, once and for all. A few leeches are irritating, but a throng of them will kill you. Don’t let them! Take control and make you studying even more effective.

(PS my worst leech ever is 昆, which has 62 reps, proving that I don’t always follow my own advice)