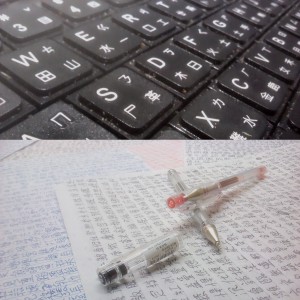 Handwritten Chinese characters can be magically beautiful and mysterious. I still remember what it felt like looking at Chinese and not understanding anything of what it said and feeling a strong attraction. Indeed, some students start learning Chinese because of the characters.

After having studied Chinese for a while, I realised, just like all other students before me have, that handwriting in Chinese takes a very long time to learn. It’s not even remotely as easy as learning another alphabet (which can be done in a matter of hours),

Learning to write by hand takes many times longer than learning to read, which in itself is a major time sink. In most languages, being able to read well almost always includes the ability of being able to communicate in handwriting as well, even if spelling might be a bit off occasionally.

Not so in Chinese.

Spending hundreds or even thousands of hours on handwriting might be okay if you love characters, but what if you don’t? Living as we do in an digital era with smart phones and computers, most students sooner or later ask themselves this question:

Is it really necessary to learn how to write by hand in Chinese?

And the follow-up question: Isn’t it enough to learn how to read and type?

When using smart phones or computers, we can use phonetic input systems, which select the characters we want for us as long as we can remember how they are pronounced. Since we enter multiple characters, we seldom need to be able to distinguish between individual characters in detail; the computer makes the right choices for us. Do we really need to write Chinese by hand at all? If you don’t understand this question, ask yourself this:

When was the last time you wrote something in English by hand?

I’ll answer that question myself by listing something I normally write by hand:

Being able to do these things in Chinese is not enough to motivate that you spend hundreds of hours learning how to write all the characters you know how to read. This doesn’t mean you should skip handwriting altogether, though.

Let’s look at this a bit closer.

Handwriting as a beginner

Without it, it will be very hard to decipher characters and know how the components work and how they fit together. You don’t need to be a calligraphy master, but you do need basic handwriting skills to do this. Simply looking at things is, as usual, a bad way of learning.

If you find that you don’t particularly like writing much by hand, then don’t, but learning 500 common characters guarantees that you can manage basic communication in written Chinese, which might be essential at times.

Sure, you won’t be able to pass an academic exam with 500-1000 characters, but that’s not what you’re aiming for. In other words, learn handwriting to enhance your understanding of Chinese characters, not because you need the handwriting in itself. Learning and maintaining the ability to write 500 characters, beyond what it takes to know how to read them, is not terribly daunting.

If you need handwriting depends entirely on what you plan to do in the future. Here are a few examples:

Again, note how your long-term goals dictate how and what you study. There is no simple answer to the question posed in the opening of this article. 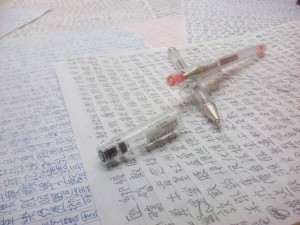 Writing as an active way of processing characters

One advantaged with handwriting over mere recognition is that you have to be more active when you write. Thus, it’s easier to focus on character components and their relationships to each other.

If you merely read, it’s easy to view the whole character as a unit, which is very efficient in the short term, but dangerous in the long run when you start encountering similar characters (you will confuse them).

However, this isn’t really an argument for more handwriting, but rather a call for students to be more active when reviewing vocabulary (especially individual characters). Don’t just look at the characters and say “I know this” and click “next”, instead, process the different parts, put them together to form a meaningful whole. This is easier when writing, but it can be done without using pencil and paper.

So yes, handwriting leads to better character learning, but it also takes many times longer, so it’s a trade off.

Be flexible, be smart

It takes a long time to learn thousands of characters, but it’s not an impossible task that takes years, especially if you already know how to read the characters. I think it’s perfectly possible to keep handwriting to the most common characters and then wait and see what happens. If you decide to become a teacher or want to do anything else where handwriting is needed, it will take some effort to learn how to write, but it’s not impossible. I think this is the best way because it minimises the time wasted on something you’re not going to use in case you don’t need handwriting.

I learnt how to write all the characters in a textbook series by hand (approximately 2000 characters), which was enough for quite some time (roughly four years). During this time, I increased the number of characters I could read and understand to well above 5000. A few months ago, I decided it was time to start learning to write more by hand (upcoming exams, the need to take lecture notes better and so on). I’m currently going through my entire Anki deck in order to learn how to write most words and characters by hand. This will take a very long time indeed, but I’ll make sure to write something about it!

Note: Here’s the article I wrote about the experience. I ended up using Skritter instead of Anki.