To be able to read and write Chinese, you need to learn several thousand characters. For beginners, this looks daunting, because learning the first handful of characters is hard. You might struggle with remembering how to write basic components, leading to situations where you simply don’t know what to write at all.

This type of problem becomes rarer the more characters you learn, however. Advanced learners and native speakers will seldom have no clue about how to write a character they have learnt, although it does happen occasionally (how do you write the tì in dǎ pēntì for example?)

I’ve written about the real challenge when learning Chinese characters before, but in this article, I want to look at a method for dealing with the problem of an ever-increasing number of characters to keep distinct from each other.

While spaced repetition software, such as Skritter or Anki, can help you learn characters effectively, you need a more strategic approach to deal with mixed up pairs, triplets or groups of characters.

Hammering away at your flashcard app will only give you temporary reprieve if you don’t also pair it with a deeper insight into what caused the error in the first place. With enough flashcards, this can keep you occupied forever.

Since this article deals with the problem of confusing and mixing up characters with each other, it’s most useful for intermediate and advanced learners. If you’re a beginner, I suggest you head over to my introduction for learning Chinese characters instead:

To figure out confusing groups of characters, you need to see them all at once, or make some concentrated effort comparing them to each other. If you only study them individually, you risk perpetuating the error by failing to notice key differences.

Please note that the method I recommend should only be used to sort out characters you have already learnt, not to learn new characters. Learning words that are closely related in meaning or sound at the same time makes them much more likely to be confused later. Learn characters organically based on what you read, not by artificially trying to find similar characters.

You can use the below method at any point where you fail to write a character. It might be overkill to use it every time, so save it for those times when you have a feeling you’re confusing two or more characters. On the other hand, tracing your error might sometimes only take a few seconds, even if the process might look elaborate here:

When you look up the character you incorrectly wrote (模 in the example above), you might encounter one of several situations:

You have now successfully identified a pair of characters that you get mixed up. Sometimes, there are more than two characters involved. For example, I found it tricky to keep track of all the characters pronounced fu with the same phonetic component (甫): 敷、缚、辅、傅 and so on. If you have your own pairs or groups of tricky characters, why don’t you share them in a comment below? 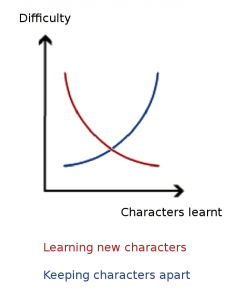 Now that you have identified two or more characters that you frequently get mixed up, you need to do something about the problem.

This is essentially the same thing as killing leeches, i.e. dealing with any tricky vocabulary you keep getting wrong over and over, but this time you also need to care about the relationship (differences and similarities between the characters).

Here are a couple of things you can try (the links lead to separate articles with suggested resources for that very activity):

This is probably one of the best usages for mnemonics and memory techniques. You need to remember something specific and it could be something you don’t have to be able to recall often or quickly, but you still need to know it. Mnemonics for character learning goes beyond the scope of this article, so I’ll merely point you in the right direction if you want to know more:

Learning characters at an intermediate and advanced level is different from learning characters as a beginner. Keeping similar characters distinct becomes a real problem, and if you’re not careful, a pair or group of characters can generate a lot of extra work and frustration. The solution is to trace your errors to figure out why you get the characters wrong and then deal decisively with them!

I’m doing this for several groups of characters at the moment, some of which have been mentioned in the article already. What characters are you confusing? Why are you confusing them? Post a comment below! By doing so, you’re also more likely to do your research, collect your thoughts and commit them to memory.

See more examples of how I deal with error tracing in my own learning here: