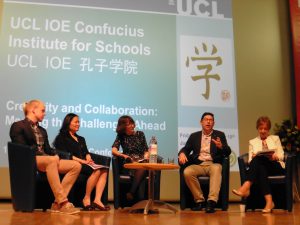 Me (left) participating in a plenary discussion at the 13th Annual Chinese Teaching Conference at University College London, arranged by the IOE Confucius Institute for Schools. Photo by: Philippa Vallely.

While the story of how I learnt Chinese is still ongoing (I’m still learning), there’s only one bit left until we’re up-to-date. This means that the story now covers almost ten years of learning. Naturally, in a way all articles on Hacking Chinese are part of the story, but in this series, I’ve focused more on my own, personal journey:

What remains is what I’m doing at the moment, which is likely to be the norm for the foreseeable future, at least in terms of my own learning. To summarise, I’m not spending much time studying Chinese actively at all, but I do work with Chinese full-time, although most of it is not actually in Chinese. I also speak Mandarin every day and try to read and listen as much as I can.

In this article, I will share some insights and reflections from this post-studying phase, including if it can really be called that. It will be a mix of advice and observations, focusing on the role of motivation, finding time to study and the benefits of teaching.

People often talk about the intermediate plateau of language learning, meaning that after studying for a while, you stop noticing much progress. At this point, many students lose motivation and some even stop learning.

I don’t like the plateau metaphor because I don’t think it describes what’s going on very well. It’s actually more the result of a normal curve of diminishing returns, where each hour you spend leads to less and lees tangible progress. There is no end to the plateau, so while it starts at the intermediate level, it’s by no means limited to it.

All advanced learning takes place in this kind of situation where you can’t rely on the euphoria of being able to do new things in the language or being able to express yourself better than you could last week. Months can go by without any noticeable progress, even if you study. Maintaining motivation is a prerequisite to getting anywhere.

Here’s a comic from Itchy Feet about what it feels like (although I suspect that the author’s use of the word “fluency” is what I would call “near-native proficiency”): 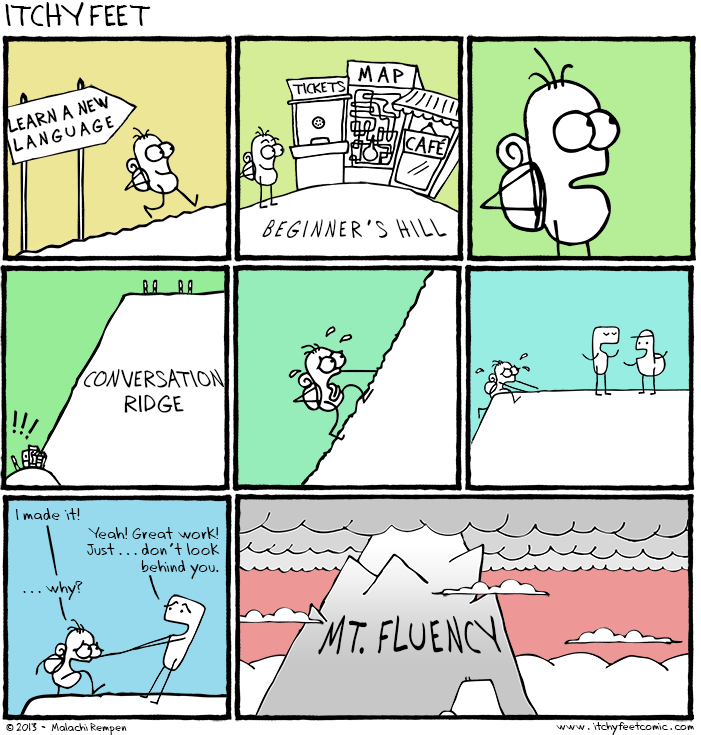 I wrote an article a while ago where I discussed the three paths to mastering Mandarin. If you’re going to get to the top of that mountain, you’ll need at least one of these, but preferably two or even all three:

Personally, I have all these, but only partly, which I discussed in the original article (the situation is roughly the same now). It’s good, but not really enough. For more information what I actually work with, check my LinkedIn profile!

Two suggestions for all learners

Below, I have included two pieces of advice that are particularly important for advanced learners, but which apply to other people as well:

Teaching is an excellent way of learning

If you have the chance, teach Chinese. It’s an excellent way of reinforcing what you already know and identifying things you only think you know. It needn’t be a formal course, or even a course at all, you could teach a beginner privately or volunteer somewhere that teaches Chinese. I’ve written an article about why teaching is so good for learning:

Use the benefits of teaching to boost your own Chinese learning

I currently teach two university courses, the first focusing on writing, and the second on technical Chinese (although it’s actually more like a normal course, just with some content geared more towards engineers).

Teaching is an excellent way of learning for me. Preparing for class, teaching itself as well as giving feedback and reflecting on the learning process are all valuable. It takes a lot of time, yes, but gives a lot back too.

Before I round this article off, I’d like to say a few words about “post studying”, which I mentioned at the outset. I have reached a level where I can do the things I want to do with Mandarin without problems, but that doesn’t mean that there isn’t anything left to learn.

I meant post studying in the sense that I don’t study much actively any more, not in the sense that I’ve reached a level where I don’t need to learn more. No, the opposite is true. I have a very long list of things I would like to learn if I had more time. Learning Chinese is a lifelong project, and as David Moser wrote in his article Why Chinese Is So Damn Hard:

Someone once said that learning Chinese is “a five-year lesson in humility”. I used to think this meant that at the end of five years you will have mastered Chinese and learned humility along the way. However, now having studied Chinese for over six years, I have concluded that actually the phrase means that after five years your Chinese will still be abysmal, but at least you will have thoroughly learned humility.

I’m close to ten years now and although I wouldn’t describe my Chinese as abysmal, it’s still true that the more I learn, the more I realise how much I have left if I want to reach a somewhat arbitrarily defined advanced level, say on par with my current English proficiency. It will probably never reach that level, especially if I just chug along at this comfortable pace. To improve, I need deliberate practice, I need drilling, I need more reading and listening.

While this article could have been longer, all articles on Hacking Chinese are parts of the story of how I learnt Chinese, and I feel little need to focus more on my own journey as opposed to helping others or actually learning more myself. There will probably be a follow-up to this article at some point, but only after some kind of major change that changes my perspective a lot!