I think most languages have a saying or an idiom meaning that teaching is a great way to learn. This article isn’t about actual teachers and students (so don’t think that you need to be a teacher to benefit), but rather about a certain way of remembering and/or understanding things that are difficult and complicated. Studying Chinese, I think idioms and grammar are two good examples, but before we look closer at them, I’ll give you a background story.

Learning idioms by explaining them 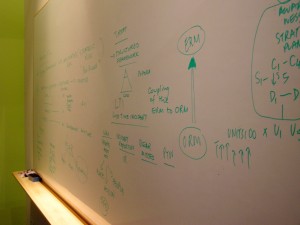 Last year, I was preparing for a test and decided to learn quite a large number of idioms (成语) because I knew that some parts of the exam would be loaded with these and it would be hard to pass without having passive knowledge of them. Therefore, I generated a list of slightly more than one thousand idioms and learnt them over a relatively short period of time (less than a week). This was doable because I knew most of the characters in these idioms already, otherwise it would have been impossible (read more about learning individual characters here).

Even though I think idioms are interesting and I plan to write something about learning them in the future, the idioms themselves aren’t the topic of this article. Instead, I want to highlight something I noticed much later. I reviewed a number of these idioms together with a few friends (who don’t speak a single word of Chinese) and whenever I encountered an idiom I didn’t know, I checked the answer, gave them the four characters (translated into Swedish) and let them guess what the idiom meant. Then, I explained what it really meant and what the connection between the underlying characters and the surface meaning was.

The thing is that now, months later, I see a pattern. All those idioms I explained to my friends in Swedish are clear and vivid in my mind and I almost never fail them in my flashcard reviews. Other idioms from that batch have much higher failure rates. Now, the obvious explanation is that I simply spent more time learning these idioms and therefore I remember them better, but I don’t think that such an explanation is adequate (I spent only perhaps 30 seconds with an idiom, which isn’t much). Instead, I want to suggest another solution.

Explaining what you’re doing really helps your own learning

There is nothing truly controversial with the above statement, but have you really tried it? What I mean is that yes, time spent matters, but how you spend that time matters even more. If you spend 30 seconds writing a 成语 over and over, it is probably wasted effort. If you spend that time explaining to your friend why four characters combine to form an idiom, well, then that seems to be very effective indeed, at least in my case. Explaining something, you approach what you want to learn in a different way and create new links to other things you know. Simply repeating something isn’t always the best, even if you’re wise enough to use spaced repetition software.

Another reason teaching or explaining is so useful as a learning method is that you expose your own weaknesses. If you’re telling someone else about an idiom, you really have to know the component characters and the story behind the idiom, you can’t just say “oh, yeah, I know this” and skip to the next flashcard (and then only later find out that you actually weren’t sure about the last character). Explaining something is a good way of making sure that you understand the concept or idea yourself.

Teach your imaginary friend, teach yourself

Most of us don’t have friends sitting around all day, eager to hear us drawling about learning Chinese, but I don’t think that’s necessary. Explaining something to your imaginary friend is good enough (i.e., explain to yourself). To make this feel real and to ascertain that what you say makes sense, you should do one of the following:

This is a very active way of learning and/or reviewing which is useful whenever you encounter something you find difficult. It’s probably not very efficient for learning simple words, but it works well for leeches (i.e. flashcards that just refuse to stick in your memory and drain time and energy).

This concept is similar to what Scott Young calls “the Feynman Technique” (watch his explanation on YouTube here). His idea is basically that you should reduce the concept you want to learn into manageable chunks that can be explained using everyday language you understand (in Chinese, this would mean using words you actually know, probably in your native language). In other words, you explain concepts as if you’re introducing them to a child or a complete beginner.

I mentioned grammar in the introduction and this is where I think this kind of thinking works best. If you encounter grammatical concepts you find hard to understand, write them down and explain them as if introducing them to someone who knows nothing. If you’re successful, you will have solidified a mental model of the grammar you’re trying to learn, and if you fail, you will at least know where you need to improve. Go back to your teacher and/or reference book and try again. Even if you don’t arrive at a perfect model (there might be no such thing), this process still helps you understand how the language works.

As I have argued elsewhere, learning a language is all about adjusting mental models of how the language functions. This means two things:

The Feynman Technique is really nothing more than an explicit way of enhancing and strengthening the models you have. The models are always there, but by writing them down or saying them aloud, you will be able to either understand better what you already know or you will find gaps or flaws in the models you currently have, which will prompt you to investigate further and update your models according to the information you find.

No substitute for actual teaching

Having taught both Chinese and English, I find that actual teaching is one of the best ways to learn. This is not to say that imaginary friends aren’t useful (they are), just that real students are better. Having taught Chinese pronunciation to classes of complete beginners several times, I know much, much more about it than I did before. This isn’t only because I’ve spent more time reading about it, but also because I’m forced to take implicit knowledge and make it explicit.

Also, a drawback of explaining things to yourself is that you’re probably not critical enough and you sometimes understand what you yourself are saying/writing, even if it wouldn’t make sense to a real beginner or an actual child. Students will ask lots of questions when they don’t understand (most of these questions are very hard to predict), which is a wonderful way of learning more.

Still, explaining to ourselves as if instructing beginners is very useful. Generally speaking, the more complicated the topic is, the better this method works. Give it a try next time you run into something you find hard to learn!