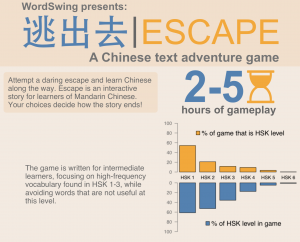 One of the problems with Chinese reading and listening practice is that it’s often too passive. The most motivated and disciplined students can force themselves to read and listen anyway, but most students won’t get the amount of listening and reading practice that they need.

If listening and reading practice were more fun and engaging, students would be more willing to spend more time studying, and would as a result learn more.

One solution to this problem is interactive text games. Instead of just being a recipient, the students are active participants who make choices that change the development and outcome of the story. Only by reading and understanding the Chinese in the game can students navigate the story to a successful conclusion. Since there is more than one ending, students are encouraged to replay the game and explore alternative paths, leading to natural repetition of vocabulary and grammar Furthermore, understanding the text in the game is the only way of avoiding making bad decisions.

The goal of these text adventure games is to help students improve their listening and reading ability. In this article, I will mostly focus on improving reading ability using these games, but it’s equally possible to use a similar method and focus on listening ability instead.

I originally wrote this article in Chinese, so this is a loose translation to English. If you want to read the Chinese version (simplified or traditional characters), please click here. I would appreciate it very much if you would share this article with Chinese teachers you know to help me spread the word!

I also recorded an audio version of this article, in both English and Chinese. Here’s the English version, but head over to the Chinese version if you want to practise your listening ability instead!

This article discusses the text adventure game Escape! If you want to play the game, you can do so here for free, without even needing to register an account. Apart from Escape! there are many other games of varying difficulty and theme to make sure everybody can find something they like. I suggest that teachers try out Escape! first, but then browse through the other games to see which might be most suitable for the students. I have written more about the other games here.

In previous articles, I have discussed learning and teaching Chinese through games in general, as well as these text adventure games in particular. In this article, however, I will focus on playing adventure text games with a teacher. This means that this article is written for teachers, but also for students who might want to play text games with their teachers.

Even though I came up with the idea for these text games more than six years ago, I only tried them out in a classroom setting recently. I was sure they would work well, but was actually surprised at how well they worked. In this post, I will share a discussion of how to make the most out of playing Escape with your students (or with your teacher if you’re a student). 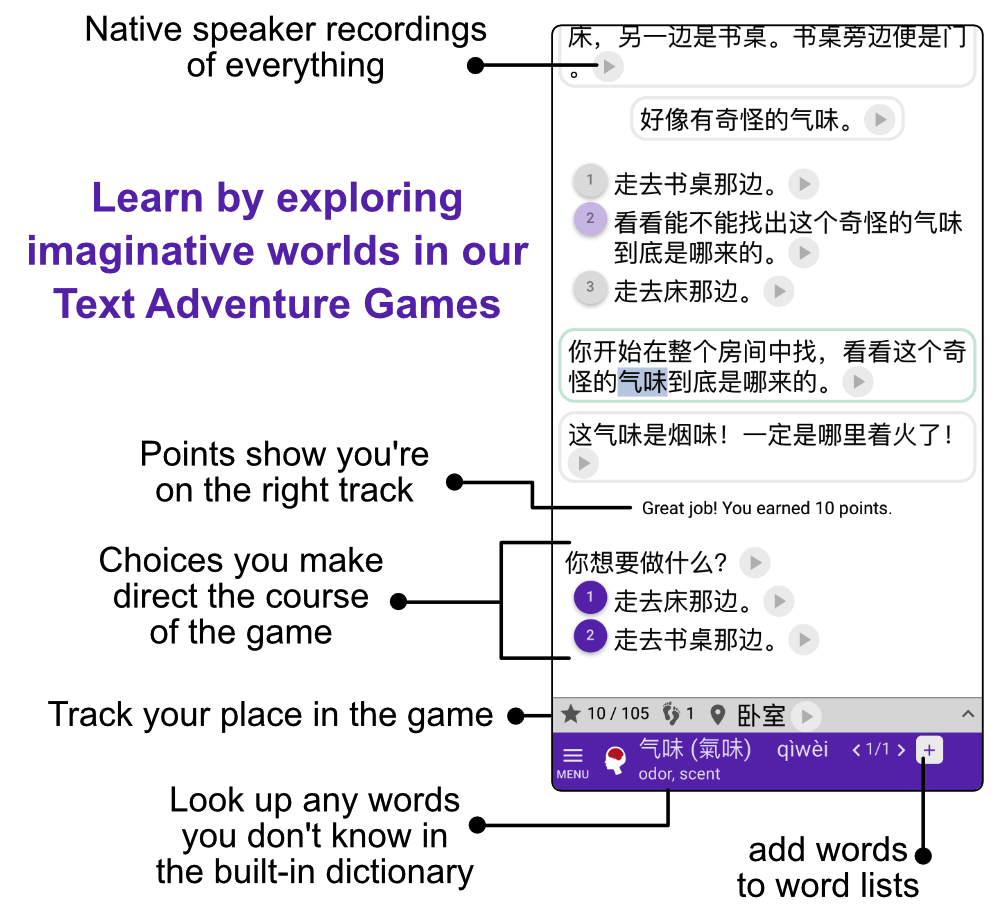 Escape is meant for intermediate students. As a teacher, you should be able to grasp the difficulty just by playing the game for ten minutes or so, and by glancing at the graphic above. I estimate that the lower bound should be students who can handle HSK 2 content, but HSK 3 is probably better. Students at more advanced levels will enjoy the game too, but playing it will be much faster, which is not really a problem.

Here’s an overview of what I recommend:

Completing the whole game using some variation of the approach presented in this article ought to take anything from a few hours up to ten hours, depending on the students’ level, age and how much they dwell on each scene. If they discuss each choice carefully, need lots of guidance and frequent use of the built-in dictionary, then finishing the game will take a very long time.

If time in the classroom is not enough, you can tell the students to finish the game on their own as homework. If you do, make sure that they register on WordSwing; otherwise they can’t use checkpoints and will need to start from scratch every time.

Below, I present the approach I used, which is inspired by Diane Neubauer, who wrote about her experience using Escape in her Chinese class. Her post also includes a 15-minute video of her class, so check it out if you want a direct experience of what playing the game in a classroom can be like.

Playing Escape can be broken down into two steps:

These two steps are then repeated, as each choice leads to more information that then leads to even more choices. The game ends either when really bad choices are made or when the students successfully complete the game.

When using the games to teach a group of students, the reading and listening part can be treated as any comprehension-based activity, and your favourite approach can be used. I think the best approach is to play the game together, where the students make choices collectively.

I suggest that you play the game in a web browser, zooming in enough to make the characters big and friendly, then displaying this on a projector so everyone can see clearly. The teacher can then use the whiteboard to write new vocabulary and draw pictures or maps.

Here are some options:

Making choices as a group

The comprehension part of playing Escape is not magical by any means; like I said, it’s more or less like any reading or listening activity. After the students have understood the information presented to them, the real fun begins!

Since you’re playing with your students as a group, they need to make a group decision about how to proceed. This is where communicative language learning takes place. In a small group, everybody can discuss together and present their thoughts about how to proceed. In a bigger group, you could consider dividing the students into smaller groups to discuss particularly crucial decisions in the game before reconvening. Prompt them not only to say which choice they prefer, but also why they think that’s the best option.

Not all choices are interesting in the game, but many are. For example, there are many ways to approach the other prisoner in the cell next the one you start in, and students might disagree about how to solve the problem. Are they going to ignore him? Convince him to come with them? Threaten him? Let them discuss the options and decide.

Your role as a teacher should only be to make sure that they understand the options; don’t meddle too much in the decision making. If necessary, have a quick show of hands to see which option is the most popular and click that one.

This kind of discussion, both between students and between teacher and student, is the most powerful part of using these games for teaching Chinese. It makes the reading and listening both before and after important and combines it with action-oriented communication. The more students are invested in the story, the more they care about convincing the others to make the choice they think is best.

Focus on form after playing the game

A central tenet of task-based language teaching is that focus on form should only come after the main task has been completed. I think this approach can be effectively applied when playing text games as well. When the students play the game, you shouldn’t spend too much time correcting pronunciation errors or fixing grammar mistakes.

Instead, do that afterwards. Since the game is quite long and will take hours to finish, I don’t mean that you should wait until the whole game is finished, just that the students should be allowed to enjoy the game and use Chinese while playing it before you focus on the language itself too much. Once you’ve played for a desired amount of time, feel free to bring out any form-focused activities you like. Do whatever you normally do with new characters, words and grammar.

Another useful activity that works well after playing the game is to go through the word list you created while playing the game. You will find that many of the words that recurred frequently throughout the game are no longer new to the students and they might even remember them without being prompted. Others will have only appeared once or twice in a certain part of the game and can be ignored unless you think they are important for some reason.

Text games beyond the classroom

Escape is free to play, so students can sign up for their own accounts and play on their own. However, I suggest you don’t tell them that until you’ve finished the game once, or at least until you’ve played as much as you intend to play in the classroom. You can then have them play the game on their own, exploring alternative paths and endings (there are two ways to win the game). Getting a higher score can also be a good goal (155 points is the maximum). This will also give them ample time to use the built-in dictionary and actually study some of the language they might have missed in class. The options in the game are presented in random order to avoid students mechanically clicking through the game, using a specific set of choices.

You can of course also follow up with extended practice of various kinds, including writing tasks related to the story in the game. I trust that most teachers do this for other classroom activities as well and adventure text games are no different in this regard.

Resources for playing Escape in the classroom

Most of the resources needed to play Escape are already included in the game, but the teacher can prepare certain things regarding vocabulary. Diane used props for items she knew would appear in the game (such as having a plastic fork and a metal knife in the classroom). In order to make it easier for you as a teacher (and as a student). Here are some words that are significantly harder than the rest of the game that you might want to be prepared for: