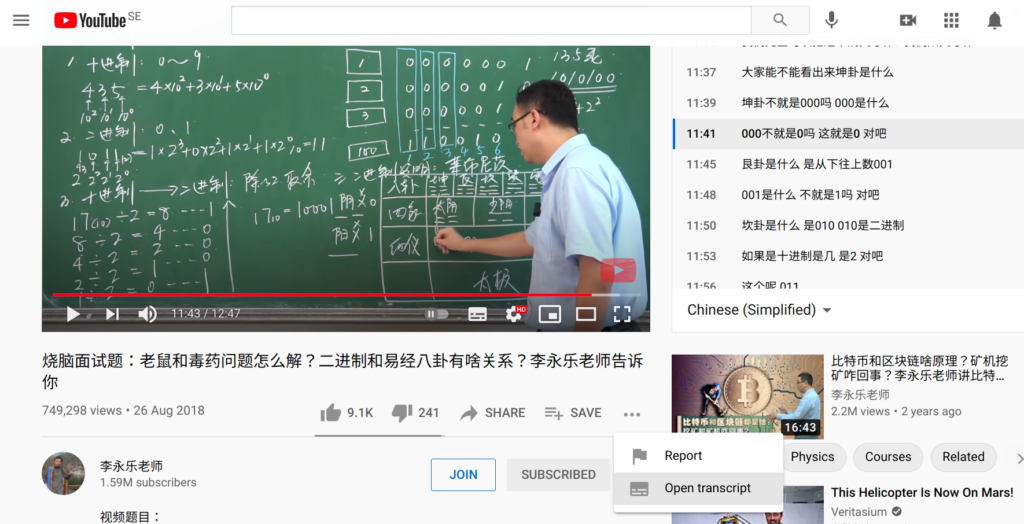 I started learning Chinese with university courses designed for students in international programs focusing on industrial engineering and management, and applied physics and electrical engineering. While I choose to focus on language and teaching after that, I’ve always felt attracted to the natural sciences. Today, I also teach Chinese courses for students in these very same programs.

Learning science in Chinese is similar to learning the language for other special purposes. For beginners, it’s the same as learning the language in general, except you go easy on things that are peripheral to your primary goal, such as sports, cuisine and so on. Instead, you add in basic mathematics and other things necessary to even begin making sense of texts about more complicated topics.

More advanced students can read texts focusing on science without too much problem as long as they are familiar with the underlying concepts and the texts have been adapted a bit. This is a case of learning language through content, rather than learning something new through a new language, which is much harder. In contrast to what most people think, scientific writing us considerably easier than reading literature.

Learning science in Chinese with 李永乐老师

One way of becoming literate or conversant in a certain area of Chinese is to follow the path of native speakers. Do you want to learn about literature? Check middle-school textbooks for Chinese students (I wrote about that here: The benefits of using 语文/國文 textbooks to learn Chinese). Do you want to be able to talk about geography in Chinese? Get hold of a textbook for native speakers. If you want to try this out, I introduced a resource with a large number of textbooks here:

One thing you can’t get through textbooks, no matter how good, is the immersive experience you get in a real classroom. Thanks to the internet and the huge appetite for educational material online, you can actually achieve this in other ways, though, without leaving the comfort of your home!

李永乐老师 (Lǐ Yǒnglè lǎoshī) is a great example of this. He’s a science teacher at a prestigious school in Beijing, but also has a popular channel on YouTube (1.6 million subscribers) and 西瓜视频 (13 million fans). To date, he has published almost 400 videos, mostly dealing with mathematics and the natural sciences, but also other topics such as finance, biology and statistics. Most of these are available for free.

Three examples of learning science in Chinese with 李永乐老师

Before you dive in, there are a couple of things to note.

After I show you three sample videos, I will introduce tips and tricks to incorporate these types of videos in your learning, even if your listening ability doesn’t allow you to dive straight in. These are not specific to these videos, of course, but are extra useful when the content is difficult.

Here are three videos from 李永乐老师 that I like:

This video is about the Fermi Paradox, or in other words, the contradiction between the size of the universe and the number of worlds that could host life, and the apparent lack of alien civilisations, also known as “where are all the aliens?” In this video, he manages to cover a lot of ground in a reasonably short time, without skipping too much. Of course, there’s more to say about every part of this video, but for the casual viewer, this is a great summary! For those who want more (in English), check this series on YouTube.

English title: How to break away from poverty? 2019 Nobel Economics Prize explained

This is an explanation of the 2019 Nobel Prize in economics, which was awarded to Banerjee, Duflo and Kremer “for their experimental approach to alleviating global poverty”. Here we can se another aspect I  like with 李永乐老师: he starts from basic principles and builds up the understanding that is needed for to answer the question. When watching his videos, I seldom feel he skips important things or dwells too long on uninteresting details. While I’m not a science teacher, I know good teaching when I see it.

English title (my translation): Brainy interview question: How to solve the rats and poison problem, and What’s the relationship between binary numbers and the eight trigrams of the Yìjīng (Book of Changes)?

This video covers the basics of the binary number system, and is a good example of why I think he’s a good teacher. Not only are the concepts clearly explained, but he also adds his own touch, linking it up with the numerology of the Chinese classic 易经 (Yìjīng), Book of Changes. I actually knew about this potential connection before I watched the video, because I knew about Leibnitz’ interest in the 易经 (Yìjīng). However, he ends up dismissing the connection as it seem the causality ran the other way around (Leibnitz learnt about 易经 (Yìjīng) too late for it to have had an influence on his work with binary numbers. You need to be very well-read indeed to not learn something from his videos.

How to learn science Chinese from 李永乐老师

Most readers who checked any of the videos above probably feel daunted by the rate of speech and the amount of vocabulary thrown your way. Granted, if you’re a beginner, this is clearly not for you (I hope that was clear from the beginning), but if you’re intermediate or advanced learner, you can make sense of these videos!

Most of you probably can’t just listen to them while jogging and get something out of it, but with the right scaffolding, these videos can be really good for learning. Let’s have a look at how to make them comprehensible:

If you like learning Chinese through videos, you should also have a look at FluentU, which is all about turning video clips into learning materials, even though 李永乐老师’s videos are not available specifically:

李永乐老师 has followed me on hundreds of kilometres of walking and running over the past six months or so. I’m roughly halfway through the library of videos and plan to get through all of them eventually. I don’t expect all readers to like him as much as I do, so here are a few questions for all of you: