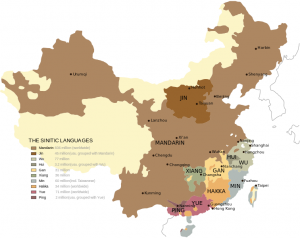 Many people who don’t study the language think of Chinese as being a language much like English, with some variety but still mutually intelligible dialects. To most people, that’s what a dialect is: a way of speaking a language particular to a a region or group of people.

Linguistically speaking, it’s hard to draw a line between dialect and language, and Chinese is a good example of this. Many Chinese dialects are mutually unintelligible, meaning that two speakers from different dialects might not understand each other (see Tang & van Heuven, 2009, for a quantitative analysis of this).

At the same time, Norwegian and Swedish are typically treated as two separate languages, even though I can understand a lot in Norwegian based only on my proficiency in Swedish. As Max Weinreich famously said (or at least popularised): “A language is a dialect with an army and a navy.” So what you choose to call something is more about politics that linguistics, in other words.

For Chinese specifically, Victor Mair popularised the word “topolect” to correspond to 方言 (fāngyán in Mandarin). I will use this word throughout this article, which is actually not about dial… I mean topolects. Instead, we’re going to talk about how these other lang… topolects influence how people speak Mandarin in particular.

According to 新华 (Xīnhuá), a state-run news agency, 73 % of the Chinese population spoke some form of Standard Chinese (普通话, Pǔtōnghuà) in 2015. This does not mean that they all speak it as their first language, though, as it’s very common to speak another topolect at home and learn Mandarin through education, mainstream media and so on. Regardless where in China you are, most people you encounter will not speak Mandarin with the standard accent you’re used to from your teacher or textbook recordings.

Indeed, this is true for native speakers of Mandarin as well, as the official standard is not the same as the Beijing dialect, although they do overlap to a large extent. In general, people will not speak perfectly standard Mandarin unless they have trained specifically to do so, and it is required for teachers, news broadcasters and so on.

This means that real people you talk to in China will bring bits and pieces of their native tongue into their Mandarin, or will speak it with a regional flavour. At first, this looks like a daunting challenge for learners, because even slight differences in sounds might make you unable to understand anything. Anyone who has arrived in a new place with a new accent will surely know what I’m talking about!

I remember a few confused situations, all taking place during my first year in Taiwan, but the examples I bring up here are relevant for speakers of many southern topolects in general.

I was out walking late at night and wanted to have some green milk tea. None of the stands selling tea were open, so I headed over to a convenience store. I found my preferred brand of milk tea, placed the carton on the counter and handed over the money. I was about to turn around and leave when the clerk suddenly asked:

My brain couldn’t parse this. I shook my head in confusion. The guy looked at me compassionately and said it again, more slowly this time. He could probably see the vocabulary lists scrolling in my brain. Do you want to add happiness? Do you want a happy home?

No, sorry, I don’t understand.

Then, eureka! He was asking:

So if I wanted him to heat the tea for me! Of course. In hindsight, that’s so obvious it baffles me that I didn’t understand what he said the first time (or even the second time).

He just pronounced /r/ as /l/. Beginner mistake on my part, I should have figured this one out, but I didn’t.

There is no něng. Or is there?

The next example left me even more perplexed. It happened at around the same time as the previous example while I was waiting for the bus with a friend, and she asked me:

This particular friend usually speaks very good Chinese (or at least, I’ve heard other people say so), so I didn’t expect anything fishy. But still, I was pretty sure that there is no něng syllable in Mandarin, or if there is, I definitely didn’t know any word with that pronunciation.

She repeated the question several times, but it was only when she hugged herself as if freezing that I realised that she was asking me if I was feeling cold or not:

This time, /l/ had turned into /n/. Albert Wolfe shares an even better example of this, mixing up nǐ and lǐ in sòng lǐ (送礼/送禮, give a gift) vs. sòng nǐ (送你, give to you (for free)).

How’s your humu these days?

The third and last example comes from a radio program. I’ve forgotten what it was about now, but there was a guy talking for about 20 minutes about his hùmǔ. I had no idea what a hùmǔ was, but I thought that I would find out if I kept listening. After a while, I figured out that it had to be family related. Maybe 护母/護母 (hùmǔ, “protective mother”). Then, suddenly I realised that he had been talking about his parents the whole time! He just pronounced 父母 as hùmǔ, switching “f” and “h”.

Above are three encounters with regionally accented Mandarin that tripped me up the first time I encountered them. I’m sure that most people who have been speaking Chinese outside of the classroom have plenty of similar examples. What did you find difficult the first time you heard it? Or maybe something you still find difficult? Leave a comment!

Dealing with regionally accented Mandarin as a student

So, where do these examples leave us? It’s obvious that we have to make considerably adjustments to our mental maps of the sound system when we start to speak with people who aren’t teachers or news broadcasters. First and foremost, even before we consider what you might be able to do about it and how it affects communication, it’s important to get the attitude right.

If you don’t understand what someone is saying to you, it’s your fault

This sounds simple enough, but I’ve heard so many people rage and rant about how people from such and such a place can’t pronounce certain sounds or don’t speak Mandarin in an intelligible way. This might indeed be true, but that’s that’s not the problem.

Will the phenomenon go away if enough foreigners complain about it? No, of course it won’t. So deal with it. This is the way the world works and it’s up to you to handle it. Fuming about it won’t help at all, and might even hinder you.

Instead, start liking regionally accented Mandarin! Make a conscious effort to think “charming” and “interesting” instead of “weird” and “stupid”. A shift in attitude can do wonders. You might still not understand what people with heavy accents say, but at least you’l be open to learning and dealing with the problem.

While it can be argued that it takes two to tango and that it’s also the responsibility of the speaker to make sure the listener understands, it’s also true that we can’t realistically hope that people will adjust to us as individuals. We can, however, influence what we ourselves do. Here are some things I suggest to help you deal with regionally accented Mandarin:

Of course, these aren’t mutually exclusive, so I would suggest talking with lots of people and looking up their various dialects.

As is the case with listening ability in general, learning to understand regionally accented Mandarin is mostly a matter of practice. The examples I listed above were all from my first year in Taiwan and I quickly got used to the way people speak there. That doesn’t mean I’m used to every single dialect nowadays, but I’ve heard enough people with different background speaking Mandarin to not get tripped up by simple and common switches like those. As everybody else (including native speakers), I still struggle with the tax driver from some place I haven’t been and whose accent is new to me.

After you’ve listened to people who switch sound A for sound B for a while, you’ll get used to it. Of course, there are many, many As and Bs, so you need lots of practise, but the principle remains the same. The important thing to understand, though, is that regionally accented Mandarin isn’t that hard to understand once you learn these systematic changes. It might sound like a different language at first, but provided that your listening ability is okay in general, once you break the code, comprehension will increase very quickly.

Unless they really are speaking a different topolect, of course, in which case it’s more like learning a different although closely related language.

Over the years, I’ve gone from thinking that regionally accented Mandarin is dangerous, bad and incomprehensible to thinking that it’s quite charming, valuable and not that hard once I actually try to learn. Combined with my interest in phonetics in general, I find myself analysing and categorising the way people speak. I think this journey could have been completed much, much faster if the thoughts in this article would have been available to me when I first arrived in Taiwan.

That’s why I wrote it, so that maybe you don’t have to take the long way around to figure out how to deal with regionally accented mandarin!

Editor’s note: I’m mostly talking about pronunciation here, but it should be noted that there are of course also differences in vocabulary and grammar. This article, originally published in 2012, was rewritten from scratch and massively updated in June, 2021.