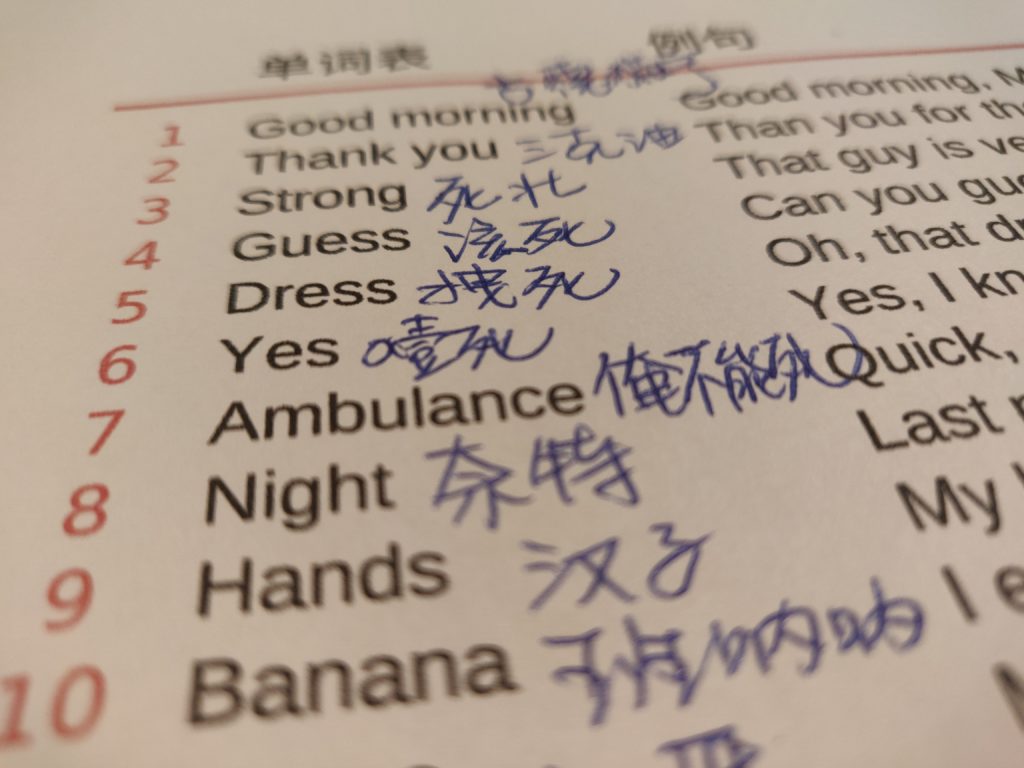 Learning is often a matter of taking something new and connecting it to something you already know; a process of using the familiar to make sense of the unfamiliar. Sometimes this doesn’t work, though, and what you already know risks blocking you from truly perceiving the new.

Learning the sounds of a foreign language is such an example. When we try to learn to pronounce Chinese as adults, existing sound categories in our brains can block the perception of subtle differences that are not important in our native language.

As I have discussed in Learning to hear the sounds and tones in Mandarin, there are scientifically sound methods for establishing new categories of sounds when learning a new language.

Using words in your native language to approximate pronunciation in your target language is not one of them, however, yet it is surprisingly common.

I have worked with phonetics for so long that I hardly remember what it’s like to not think in terms of the International Phonetic Alphabet, but I do get reminded of the perils of ad hoc approximations all the time because of student questions and discussions.

Why you shouldn’t use English words to approximate Chinese pronunciation

The fact is that few sounds in Chinese have exact counterparts in English, so saying that “x in Mandarin is like y in English” is almost always wrong, unless you add some caveat.

Sure, if your goal is to teach tourists how to say basic phrases, go ahead, but I think we should set the bar higher than that.

Below, I have collected a few examples of actual explanations of how certain sounds in Mandarin are pronounced, many of them from websites that purport to teach Mandarin pronunciation! All these are wrong to a certain extent, by the way, but I will get to that later.

I’m not going to go through in detail exactly why each of these are wrong, but I have written about most of them in A guide to Pinyin traps and pitfalls: Learn Mandarin pronunciation:

A guide to Pinyin traps and pitfalls: Learn Mandarin pronunciation

Writing down pronunciation is hard

There many problems with this approach of writing about pronunciation.

First, writing down pronunciation is notoriously difficult. The main problem is that there are many more sounds than there are letters in the alphabet, and that’s true even if we only look at English. This is why the International Phonetic Alphabet exists.

For example, p in English is used to denote two different sounds. The first, p as in “pot” is aspirated (it has a puff of air), but the p in “spot” is unaspirated (it does not have a puff of air). If you haven’t thought much about this, try saying these two words and you will notice that they are different. Here’s an article that discusses this phenomenon in English and actually mentions Chinese too.

This difference is not significant in English, so saying “spot” with an aspirated “p” doesn’t give rise to a new word; it just sounds odd.

Yet in Mandarin, this difference is significant and two different letters are used for these sounds: p for the aspirated version and b for the unaspirated one. None of them are voiced! The same is true for p/b, d/t and so on.

Please note that what I’ve described above are the basic sounds, which can change in context. Voicing is quite complicated in both languages; I simply want to show that you can’t really trust ordinary letters when it comes to pronunciation.

This gets even worse when we’re talking about vowels that exist in a space rather than on a linear spectrum. While it’s relatively easy to nail down consonants, native-like pronunciation of vowels is considerably harder. This is even problematic in IPA, where a large number of symbols are used, and then extra diacritics are added to specify these further.

Another issue is that there’s considerable variation in how native speakers of English pronounce words. How do I know what’s intended when someone says that -iu is pronounced like “ee-oo”? Who’s “ee-oo”?

Or if -e in de (的) is said to be pronounced like a as in “a sound”, who’s “a” are we talking about? I pronounce these two sounds more or less the same, so for me this is a pretty good approximation, but other people who read such a description don’t know how I pronounce these words! Many native speakers pronounce “a” with a more open vowel.

Don’t learn sounds by reading about them, listen instead

Pronunciation should be learnt primarily through listening, then mimicking. Since it can be hard to perceive new sounds for adults, some explanations and descriptions of the sounds can help you pay attention to the right part, but this explanation needs to be correct and meaningful, and not in writing only. I wrote more about this in How learning some basic theory can improve your pronunciation.

The only possible exception to this is if you’re a trained phonetician, in which case listening to people speaking and studying how these sounds are normally transcribed can be enough. This can indeed be a powerful aid, as seeing the actual sounds written down can be helpful in directing attention when listening.

Using English words is worse than useless; it might stop you from hearing the actual sounds

The problem of using English words to describe Mandarin pronunciation can be more than just misleading. If you get it into your head that j in Pinyin is pronounced like j in “jeep”, you will have effectively steered your attention away from the actual sound.

If you couple this with lots of reading in Pinyin, you will solidify the idea that these two sounds are the same (they aren’t; Pinyin j is not voiced and it’s not pronounced with the same tongue position either).

While this is something I will have to revisit in a future article, there’s also evidence to suggest that orthography, i.e. how we write words, influences how we perceive and pronounce them. The very fact that you see and think of the letter j might make it less likely that you  hear the actual sound!

Naturally, this is only part of what makes it hard to learn new sounds. I’m not suggesting that learning Chinese pronunciation would be easy if everybody stopped using English words, but there’s no reason to make it harder than it already is.

To really hammer home how bad it is to try to learn Chinese pronunciation with English words, let’s look at the opposite case: learning English pronunciation with Chinese characters. There are many books and travel dictionaries that use this approach.

Here are some examples. See if you can guess what they mean!

Was it clear to you what they all meant? Were they easy to understand? Do you think this is a good way of teaching English pronunciation?

In case you couldn’t guess them, I’ve posted the “correct” answers as a comment to this article!

Like I said, this might be good enough for a tourist, and better than nothing, but I’d argue that it’s worse than useless for someone who plans to really learn the language.

I have a book that teaches French this way, and tested it out by letting someone read the Chinese characters and leting me guess what French words and phrases were intended. It sometimes worked with some context and a bit of guesswork, but it was pretty hard. It was never easy, but hilarious all the way through.

The conclusion is that learning pronunciation by using approximations in English is a really bad idea. Asking a question like “how is Pinyin q pronounced?” in writing is going to give you a dozen answers that all say different things. One or two of these might even be correct, but how do you know which two?

I’m not saying you have to use scientific descriptions of sounds to be able to talk about them, I use everyday language to talk about pronunciation all the time, such as “puff of air” instead of “aspiration”, but the problem is that when you start using English words in writing, no one can be sure exactly which sounds are meant.

So, what should you do instead? Listen more than you read; mimic as much as you can. Learn some basic theory and study accurate descriptions of the sounds, even if they are not as straightforward as saying that it’s the same as a certain word in English. Always pair this with listening.

If you don’t know where to start, I listed many useful resources in my article 24 great resources for improving your Mandarin pronunciation.