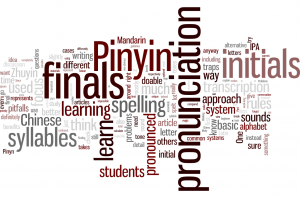 I have taught a brief introduction course in Chinese at my university now for five years running and every time, I try to give the students as much guidance as I can within the allotted time.

Since the course contains everything from basic character writing and vocabulary to pronunciation and conversation practice, I really need to think about what I should say and what I shouldn’t

One of the things I receive the most questions about and that has sailed up my priority list is pronunciation and Pinyin. My usual reply nowadays is that the students should focus on the initials and finals, not the Pinyn spelling.

Before I explain this in more detail, let’s just go through some basic definitions here in case you’re new to learning Chinese. Pinyin is the most commonly used transcription system used for learning Chinese, so it’s a way of writing Chinese syllables with the Latin alphabet (Pinyin means “spell sound”).

When it comes to initials and finals, a Chinese syllable can traditionally be divided into initial, final and tone. Some syllables don’t have initials (or they have a so called zero initial), such as “wu” and “ying”. All syllables have finals. Most syllables have both. I’m not including tones at all in this discussion, but that doesn’t mean it’s optional!

Finding the right level of detail for pronunciation

Mandarin consists of around 1000 common syllables (including tone), which is a very small number compared to English. In theory, you could learn those syllables one by one and make sure your pronunciation is correct for each one. This is impractical, however. If you remove the tones, there are still some 400 syllables that you need to learn, which isn’t impossible, but still a lot.

The next step would be to break the syllables into initials and finals. There are only slightly more than 20 and slightly less than 40 initials and finals respectively, so that makes a total of 60, which is definitely doable. It’s even doable in a week-long crash course! 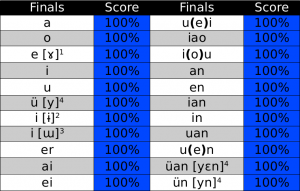 Some students go further than this and try to understand what sound each letter in Pinyin actually represents. This is not a good idea as a beginner, you shouldn’t spend your first week of learning Chinese trying to map letters to various sounds in Pinyin.

One of the most well-read articles on this website is my discussion of some of the more common problems students encounter when learning Pinyin (see A guide to Pinyin traps and pitfalls). These are mostly cases where one letter is used to represent several different sounds.

Students who focus on Pinyn too much will want to know how “i” is pronounced in all cases and what rules are involved, how “e” is really pronounced and so on. I can of course give the answers to these questions, they are not hard, but it takes a lot of time and most students forget the rules anyway. I also think there is a better way that leads to less confusion and better pronunciation.

Focus on initials and finals instead of Pinyin spelling

The solution to the above problem is to ignore the details of letters and pronunciation, and look at the initials and finals as whole, unbreakable units. The spelling will of course be used as a reminder of the pronunciation, but you should study the pronunciation of each initial and final individually.

If you know them well, you will be able to produce all the basic sounds in Mandarin. As I said above, there are only around 60 of them, so this is definitely doable.

Here are two benefits with this approach:

If you do this, you’re likely to learn the spelling rules fairly quickly anyway, I just think it’s a better idea to learn initials and finals first and then gradually figure out the rules, rather than to view pronunciation as a kind of complicated equation where the pronunciation of each letter is conditioned by its surroundings. If it takes you ten second to calculate how something should be pronounced, you’re not doing it right.

This approach will solve some problems completely, such as the multiple ways of pronouncing “e”, which is different in the finals “-ie”, “-ei”, “-e” and “-eng”. You should learn these as different finals! Don’t worry that they are all spelt with “e”, they aren’t pronounced the same way. If you don’t focus all that much on the spelling, this will be easier.

Not a magic bullet

Even with the above approach, Pinyin will cause some problems. This is because the spellings of some distinct finals are identical. For instance, “-ün” and “-un” are normally spelt the same way, as are “-üan” and “-uan” and some others.

This includes the notorious “-i”, which is pronounced differently after “zh/ch/sh/r”, “z/c/s” and “j/q/x” etc. If you’re not sure which finals hide behind these, check the original Pinyin traps and pitfalls article. Problems like this will remain even if you focus on initials and finals, so it’s simply something you have to learn.

What about alternative transcription systems?

One alternative to the above approach and one I’m sure many readers have been thinking about all through this article is to use another transcription system that doesn’t use the Latin alphabet, such as Zhuyin Fuhao (also known as Bopomofo). This system uses unique symbols for initials and finals (and medials, but that goes beyond the scope of this article).

This does indeed bring the same benefits (and some others), but the downside is of course that Zhuyin is mostly used in Taiwan these days and using it will limit the choice of learning materials, especially if you study simplified characters.

That being said, I think it’s useful to learn more than one transcription system, but if you have already learnt basic pronunciation, I think you would benefit more from learning all initials and finals in IPA (International Phonetic Alphabet) instead of either Zhuyin or Pinyin. Unlike the others, this is a real phonetic alphabet that represents sounds in writing much more accurately.

If you want to know more about transcription systems, their pros and cons and how to learn IPA, check the series of articles about this topic, beginning with this on: