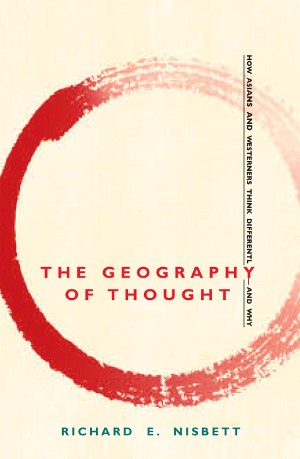 Do the Chinese think differently than we do? Are cultural differences only something superficial or are there deeper, more fundamental differences between people in East Asia and the West?

The first time I returned to Sweden after an extended stay in Taiwan, questions like these weren’t the most common ones asked by family and friends, but they were certainly the most interesting ones that I spent the most time thinking about.

I have of course encountered these questions many times since, but this semester was the first time that I’ve had the opportunity to actually investigate them based on something other than my own personal experience.

In a course called “語言、文化與認知” (Language, culture and cognition), we’ve been reading mainly two books dealing with these three topics and how they are related.

The first is Richard E. Nisbett’s The Geography of Thought and the second is Language, Mind and Culture by Zoltan Kövecses. Both are quite interesting, but Nisbett’s book is much easier to read and probably also more interesting for the average Chinese student, which is why I have chosen to write this book recommendation.

Even though Hacking Chinese  is mostly about how to learn Mandarin, I sometimes think it’s necessary to step outside this fairly narrow range of topics. This typically happens when I encounter something which I think is very important but hard to find online (such as my guide to Pinyin traps and pitfalls), or when I find something which is related to learning Chinese and is so interesting that I think it’s worth recommending to everyone. This article is a prime example of the second type of topic.

The full title of this book is The Geography of Thought: How East Asians and Westerners Think Differently… And Why. This explains quite well what the book is about, even though almost all the words used are quite vague. “East Asians” in this case means Chinese, Japanese and Koreans. “Westerners” typically means Americans, but can be extended to the rest of the Anglosphere, and occasionally also to Europe. The author is not after making detailed points about the differences between people from specific countries, he’s after the bigger picture. The really big picture, actually.

Although the author generalises a lot, this book isn’t pure speculation. Rather, it’s based on a large number of studies into culture and cognition, many of them conducted by the author and his colleagues. The speculations are educated guesses based on these results. Looking at the evidence from these and other studies, the author discusses and tries to answer the following questions (from page xix):

It might seem like an impossible task to discuss all these topics and attempt to find a few common sources or underlying structures for all of them in one single book, but this is what Nisbett has done, and this is why I think this book is worth reading for people who live in China, study Chinese or are simply interested in the topic.

Rather than writing a detailed summary of the book, I’m simply going to link to an already existing summary written by Dr. John D. Eigenauer: Summary of the Geography of Thought (this document is no longer available, but an archived copy can be found here). Although it’s very hard to compress all the arguments of the book into a summary of less than 2000 words, this is still a very good attempt. Of course, it won’t detail empirical support or illustrate with examples, but it should definitely be enough to let you decide if you think the book is worth reading. If you feel very brave, there is a Chinese translation called 思维的版图.

Here’s my attempt at a much shorter summary. It’s merely here to give you a rough idea what the book is about, so it won’t serve as a good starting point for discussions about the actual book:

In summary, the book starts in ancient Greece and China, comparing dominant trends in philosophy and discussing the individualism (personal agency) of the West in contrast to the collectivism (collective agency) of the East. The Greeks tried to understand things as linear, simple and rule-bound, as objects devoid of context, whereas the Chinese regarded the world as a complex place in constant flux, with objects best understood by their relationship to each other, rather than as separate entities.

Nisbett then traces the origin of these different modes of thought to the socioeconomic and cultural factors that gave rise to these two very different civilisations (an archipelago focusing on maritime trade versus an agricultural empire).

Then, the book moves into the present day, looking at how East Asians and Westerns perceive the self in contrast to the collective, using numerous studies to support the claim that East Asians are more interdependent than Westerners, who tend to be more individualistic. The key concept in East Asia is harmony, where collective goals are held as more important than individual goals.

The next chapter shows how ancient philosophy actually does reflect the way people think today, using several studies to show that East Asians are more sensitive to substance rather than shape, are better at perceiving relationships between objects rather than the objects themselves, and focus more on context than Westerners do. Westerners view themselves as protagonists in an autobiographical novel, whereas East Asians are more like supporting roles in numerous other novels.

Next, the author moves on to the topic of causality, arguing that East Asians pay more attention to context (the other boys made him do it) rather than attributes intrinsic to the person (the bad seed). Westerners see overly simplistic causal chains where East Asians see opaque complex systems. This theme of relationships versus objects is further deepened in the next chapter, which presents studies showing that Western children learn nouns much faster than verbs, whereas the opposite is true for East Asians. Similarly, East Asians tend to group words based on their relationship to each other rather than on the categories they belong to.

In the next chapter, Nisbett turns to rationalism and reasonableness, arguing that the former is very important in the West, whereas East Asians traditionally favour the latter. Westerns strive to resolve dilemmas and paradoxes, whereas East Asians strive for compromises or can accept what to a Westerner looks like two mutually exclusive opinions.

In the final “real” chapter of the book, the author discusses how these differences manifest themselves in different areas of modern life, such as law, science, education, business, philosophy and so on.

Finally, in the epilogue, the author looks forward, discussing what effects this has for cognitive and social psychology as well as for the world in general. Will we see a clash of civilisations or will globalisation lead to a convergence of ideas?

Personally, I found The Geography of Thought very interesting. Before I talk about that, though, I want to say a few words about my thoughts on cultural differences in general.

In the introduction to this article, I wrote that people often ask me about the differences of people here in Taiwan and people in Sweden. My basic approach has always been to treat cultural differences as important on a statistical average level, but not necessarily on an individual level. In other words, it matters more who you are than what culture you grew up in. Like so: 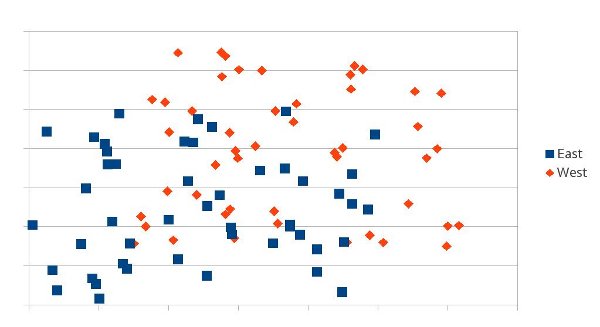 This image roughly represent my view of cultural differences. As we can see, people in Taiwan and Sweden (or wherever) differ from each other, but the differences between individuals can be much bigger than the difference in averages between the two groups.

However, this doesn’t mean that there isn’t room for significant and interesting statistical differences between cultures. If we look at all Taiwanese people and all Swedish people, we will certainly find a lot of differences, although these might not apply to all of the individuals in those two groups. This is what people perceive as being the difference between the way people act and think in different countries.

The reason I like The Geography of Thought is that it connects the dots. Over the years, I have collected a large number of observations of how Taiwan (the East) is different from my native Sweden (the West), both through direct observation and through reading about the experience of other people.

However, these are usually just independent data points (dots). The Geography of Thought helped me connect these together and gave me a glimpse of the big picture.

Naturally, to arrive at this big picture, some sacrifices need to be made. There are indeed several articles that discuss and criticise The Geography of Thought, sometimes because of the sweeping statements about “the West” and “the East” (how can you even discuss something which is so vaguely defined?), sometimes because of the conclusions the author arrives at (claiming that the author overreaches in his ambition to find a common denominator for the observed data).

This doesn’t bother me too much, though. I don’t read this book to write a thesis in social psychology, I read it because I want that bigger picture which is so hard to get at.

Thus, I recommend this book because I really think that it offers a valuable insight into how Asians and Westerners think differently. It’s not a handbook in intercultural communication, but I dare say that most people who have had at least some exposure to the cultures of East Asia will find it interesting.

However, the book hasn’t changed my basic approach, I still think that people are people, regardless of their cultural background. I think there are certainly differences between how we perceive the world around us, but I think that the similarities are much bigger than the differences.

Still, as I said earlier, these differences are important, and in The Geography of Thought, Nisbett makes an excellent attempt at discussing them and explaining the underlying patterns that make us think differently.

If you want to read the entire book, you can buy it from Amazon here.