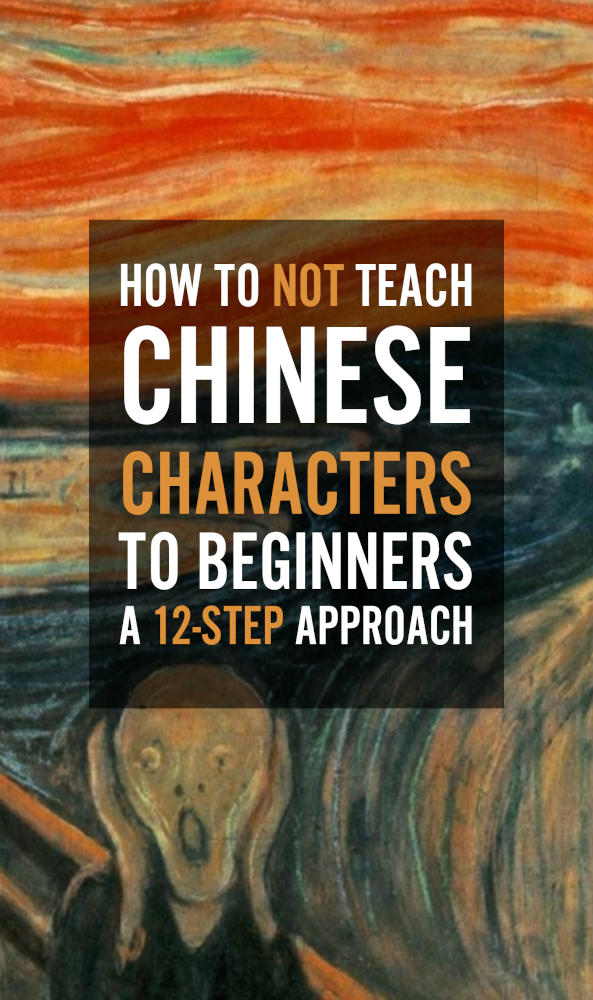 This article is a rant based on more than a decade of observing how Chinese characters are taught in classrooms around the world. What I portray here is meant to be tongue-in-cheek, poking fun at bad teaching.

However, my goal is not to attack teachers; most do their best and simply don’t have the education, time or resources to get everything right. If you are a teacher, you can read this article as a guide for what to do (just reverse the wording for each advice). If you’re a beginner learning characters yourself, you should probably read this article instead: How to learn Chinese characters as a beginner.

At the end of this article, there is a poll where you can share what you have experienced yourself!

Beginners often regard Chinese characters with a mixture of respect, fascination and dread. If you want to make them really scared and minimise the risk of them learning the language, and, at the same time, maximise the amount of frustration and angst students feel, you’ve come to the right place!

How to not teach Chinese characters to beginners: A 12-step approach

Here I present twelve steps to terrible teaching, including links to more information whenever relevant. It’s rare to see teachers who are able to follow all the steps here, but nothing here is made up.

…or you can do the opposite of everything I’ve said in the article and teach characters in a sensible way that makes learning both fascinating and useful. All links mentioned in the article lead to other articles with advice about how to actually learn and teach characters, and if you invert the language for each piece of advice above, you will have a reasonable list of things you should do when teaching beginners. For students reading this article, I have created a poll where you can share which of the above you have seen yourself. Am I missing something particularly terrible? Leave a comment below!

Have you seen something terrible that isn’t covered in the article? Leave a comment below!