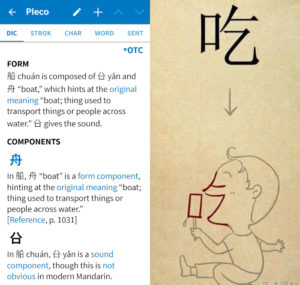 Learning characters is the most obvious challenge for students of Chinese. It’s obvious because no other world language requires you to learn thousands of unique symbols to be able to read and write; it’s a challenge because of the sheer number of characters and because there’s nothing similar in any other language, except Japanese.

This becomes abundantly clear when learning Chinese characters. While it’s possible to learn to read and write by mindless repetition without understanding, this task is so daunting that it borders on being impossible for adult learners.

In this article, we will look at five levels of understanding Chinese characters and how they relate to memorising characters. The levels range from surface structures to accurate understanding of how characters work. While more understanding is generally beneficial, I will argue that there’s a limit to how deep into the rabbit hole you should go.

Let’s see how much understanding you should aim for to get the most out of your learning!

I have ranked the five levels and how they can be used for learning Chinese characters according to depth, with the most superficial form of understanding first and the deepest last:

Let’s have a look at each in turn to figure out how far down the list you should go.

Level 1: Inventing pictures that disregard composition and structure of characters 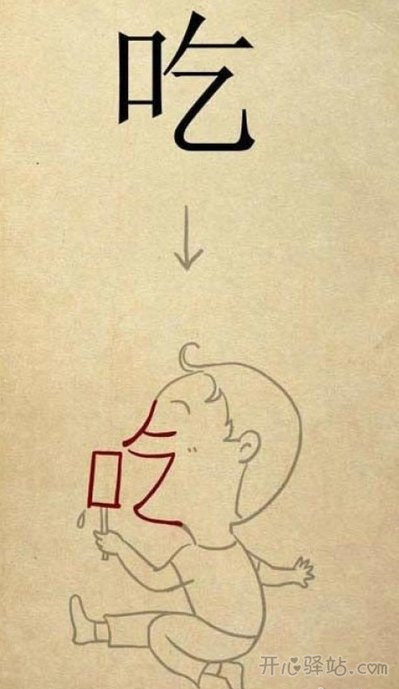 The most superficial form of understanding can’t really be called understanding at all, because instead of caring about how a character is composed, it only looks at the written form and finds something that at least the author or artist thinks resembles the character.

Such pictures have little use except as decoration or to attract the attention of children.

The picture on the right is a good example. Someone looked at the character 吃 (to eat) and thought that drawing a boy eating ice cream would make the character easier to remember.

And they may be right, but only if this is the only Chinese character you want to learn. 口 (“mouth; opening”) is a very common character component, so what are you going to do with other characters that share this component, such as 吗, 吧, 呢, 喝 叫 and so on? Are you going to draw 口 as ice cream in these cases, too?

If yes, then so be it, it’s just a bit unnecessary, but if no, you’re effectively making the task of learning to read and write Chinese many times harder. Learning thousands of unique pictures is much, much harder than learning combinations of a few hundred components.

To do this, however, you need to be consistent. The easiest way to be consistent is to use the real meaning whenever possible. Associating ice cream with 口 does not help you understand other characters, but learning that 口 means “mouth” or “opening” helps quite a bit.

I have written more about the problem of using pictures like this when learning characters:

If you want to learn Chinese for real and not just learn a few dozen characters for fun, I suggest that you stay as far away as you can from this type of learning material.

The next step towards deeper understanding is to actually use the correct components, but to do so without being aware of their true relationship. This is very common in explanations of Chinese characters directed at people who don’t learn Chinese, and is often used to draw on ancient Chinese “wisdom”.

I’ve seen many examples of this, such as claiming that the ancient Chinese thought music had healing powers by pointing to the fact that 藥, “medicine”, contains the character 樂, “music” (this only works with traditional characters, because different components are used in simplified Chinese).

Another example is to say that the character 船, “boat”, alludes to Noah and his ark by saying that it contains 舟 “boat” and 八 “eight” 口 “mouth” (representing people), referring to Noah and his family. Both these are examples I’ve seen, by the way; I’m not making this up!

The problem is of course that to believe these stories, you need to have missed one of the most fundamental things about how Chinese characters work, namely that most characters contain components that are there for no other reason than to indicate pronunciation.

The real story is that 樂, “music”, is included in 藥, “medicine”, because originally, these characters were pronounced similarly or the same; only the grass component refers to the meaning of the character. In 船, 舟 means “boat”, but the right component is only there for pronunciation reasons (although that’s not obvious in modern Mandarin).

Learn more about phonetic components in these articles:

Another example of this are components whose superficial form is actually different from it’s actual function. For example, in 美 “beautiful”, the top part looks like 羊 “sheep”, but it is in fact some kind of headgear (the bottom part is the person wearing the headgear). Thinking that 美 consists of “sheep” and “big” gives you the superficial form, but hides the true etymology.

I would advice students and teachers to not stop on this level, because without knowledge about phonetic components, you haven’t even begun to understand how Chinese characters work.

Level 3: Using superficial pictures while being aware of functional components

Next on our quest for true understanding and a better way of memorising characters is to do the same as above, but with the insight that a vast majority of characters are combinations of meaning and sound components, just like the two characters for “medicine” and “boat” in the previous section.

However, it’s a fact that concrete images are easier to remember than abstract notions. Thus, one way of approaching the task of learning characters is to deliberately make use of the method described in the previous section while being aware of how functional components work.

It’s far less problematic to invent the story about Noah and his ark to remember how to write 船 than it is to try to use that story to prove that the ancient Chinese were actually Christians. The first is a clever mnemonic device to remember the components, the second is just stupid.

When it comes to cases like 美 “beautiful” mentioned above, I think it’s enough to be aware that this is happening. Since the modern form is written exactly like 羊 plus 大, building mnemonics based on this is fine for practical reasons, although you should be aware of the fact that this is not actually how this character came to be.

Why you should think of characters in terms of functional components

This is the first level where I think it’s okay for serious learners to stop. Knowing about functional components will help you remember the characters, how to write them and sometimes even how to pronounce them. Combine that with a vivid and easy-to-remember mnemonic and you’re good to go.

Almost all my own character memorisation takes place on this level.

If you really care about functional components and maybe have an interest in characters beyond their use for communication, you can deliberately encode information about functional components in the mnemonics you create. I seldom find it necessary to do so myself, but my friend Ash Henson from Outlier Linguistics suggested that it could be helpful if etymological correctness is highly valued.

There are many ways of doing this, but the most straightforward is to incorporate a specific element into each story or picture you make that let you know what function a certain component has. Meaning components don’t need any special treatment if you use a picture matching the actual meaning of the component of course, but to indicate sound components, you could picture them as being made out of glass or something similar. This is a bit like using elements to represent tones.

For example, if you’re using the picture of Noah and his family to remember how to write 船, then you visualise 舟 as a boat, nothing strange there as it actually is there to indicate the meaning “boat”, but then you picture the eight people (represented by eight mouths), but in your mental picture, they are transparent glass figurines rather than real people. You can do this consistently, which will allow you to remember that the right part of the character is not actually related to meaning.

You could do something similar with the empty component “sheep” in 美, “beautiful”.

Personally, I find this to be overkill in most cases, but I can also see that it could be useful sometimes.

Finally, we reach the last level, where only true etymology is allowed. This means that you are only allowed to use etymologically correct mnemonics and that no shortcuts are allowed. No music-induced happiness or glass figurines here!

The problem with this approach is that our brains have a much easier time remembering concrete images. Meaning is easier to visualise than sound, for obvious reasons, so creating mnemonics becomes very hard.

I don’t advise anyone to be this strict when memorising characters, but maybe it is the natural result of learning to speak before you learn to write, at least in some cases. It can also be used by very advanced students who already know thousands of characters.

For example, if a native speaker or advanced learner encounters the character 鰈, which is not very common, it’s fairly easy to just think of it as “that fish which is pronounced dié“. While there could be more than one phonetic component that gives the sound dié, it’s not really necessary to form a mental image here, just seeing it once does the trick because it’s so regular and all the components are already well-known.

This is not really a strategy, but more something that occasionally just happens.

What level of understanding works best for you?

I place myself smack in the middle of my spectrum from superficial forms to deep structure. I don’t mind using concrete images for phonetic components or using an empty component, even though I know it’s actually not what it looks like, as long as it helps me remember the character. I do also enjoy looking into actual etymology to better understand the characters, but that is, at least for me, a separate process in most cases.

If you’re at all interested in the etymology of characters, I strongly suggest you check out Outlier Linguistics dictionary, which is an add-on to Pleco. This will make looking these things up a breeze.