I know this advice is going to rub some people the wrong way, but hopefully by the end of the article you’ll understand why I say this: radicals are of little use for learning how characters work. Their purpose is indexing characters in a dictionary.

The concept of radical, or 部首 bùshǒu, didn’t even exist until after the publication of the Shuōwén Jiězì [說文解字], at which point the writing system had already been around for well over 1500 years, and the vast majority of characters in use today were invented before the Shuōwén. Read that again and let it sink in. If that’s the case, then there’s no way that radicals were what people had in mind when they were creating characters. There must be something else going on.

So what are radicals, really?

Which section to file a character under can be a fairly arbitrary decision. Most people’s understanding is that the 部首 gives a hint about meaning and the sound component (聲符 shēngfú) gives a hint about the sound, and that the two are different entities. That’s not always the case.

Sometimes, the 部首 is the sound component. For example 刀 (刂 dāo, knife) is both the phonetic and the radical in 到, but it is not the meaning component – 至 zhì is (it means to arrive, just like 到).

Intuitively, one would think that radicals are assigned in a consistent manner, but sometimes the way they’re assigned can be very haphazard, even for characters that share the same structure:

For the first three characters, the radical and meaning components are same. 變 is inconsistent with the others in that it’s filed under 言 (part of luán, the sound component which the other characters all share #1).

So again, characters are filed into a given section. This is a choice made by a human being, not an inherent part of the nature of Chinese characters, and it’s a flawed but workable system.

So hopefully, you can see that radicals (remember: section headings, not necessarily meaning components!) are useful for organising and looking things up in a dictionary, but they’re not especially useful for explaining how characters work.

But there’s a better way

You should look at characters in terms of their functional components. Character components can serve a few different functions, and you need to understand those functions rather than lump them all under one category called radicals. 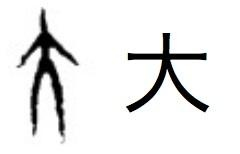 There are three attributes that all characters have (using 大 as an example):

The possible functions that a component can have derive directly from these three attributes.

There are three primary functions:

Then there is a fourth function that derives from the way Chinese characters evolved in form over time. A component can also:

This one is difficult to ascertain without training in palaeography, but our dictionary will explain which components have been corrupted and how. Continuing with 大 as an example, there are 1) instances in which a component was originally 大 but has now changed to something else, and 2) instances in which a component started as something else but has corrupted to look like 大 today (post forthcoming on how you can t trust your eyes).

So now you’ve seen how the same component can serve completely different functions in different characters, and how components can become corrupted over time, obscuring their original purpose. Here’s the interesting thing: out of the characters I’ve just discussed, 大 is only the radical in 天 and 夫. In the others, it’s not, no matter which function it’s serving. The radical in the other characters is:

Again, all this is not to say that you should completely throw radicals out the window. They’re good to know, but you should keep in mind what they’re used for: looking up characters in traditionally-arranged dictionaries. That’s it. They’re not the building blocks of Chinese characters (that’s functional components!). They’re an imperfect, man-made system of arranging and looking up characters in a dictionary. The concept of 部首 didn’t even exist when the vast majority of characters were being created

Thanks to John for sharing his insights in this article! I would like to point out that this is close to what I advocate myself, I avoid using the word radical and say character component instead. I have also written two articles about phonetic components (part 1, part 2). I like this article by John because it explains why we shouldn’t obsess about radicals. Naturally, some of the most commonly used character components will also be found in a radical list, but confusing radicals with functional components will lead to confusion.

1 – How can luán be the sound component for 變 biàn? This most certainly looks impossible judging from the Mandarin pronunciation, but what’s important is the phonology of the language when the characters were invented. If we look a reconstruction of Old Chinese phonology (i.e., a reconstruction of the sounds of the language that was in use when these Chinese characters were invented thousands of years ago), we can get a glimpse at what the language probably looked like.

In a future post, we’ll do an introduction to Old Chinese reconstruction and why it’s important for doing research in Chinese paleography, but for now we’ll just take a look at some reconstructions. Keep in mind, it’s not important that you understand what all of these symbols mean exactly. What is important, is noticing the similarities and differences (the symbol * just means that you are looking at a reconstruction):

The main thing to take away here, is that each of these words share the root *ron. Three of these words have prefixes: *məә, *p-, *m- and two have suffixes *-s. It is similar to how root words work in English. Take the root “get”: get, forget, beget, got, gotten. Imagine that Chinese characters had been used in Old English and the same sound component was used for each of these words.Even though the sounds aren’t exactly the same, they do share a root and the reader would have been able to figure out which was meant by context and by the addition of a meaning component.

Keep in mind, I’m merely trying to make an analogy between two languages with very different histories, so be kind. The reconstructions above are from Baxter-Sagart OC v1. Check out their new book here.

2 – 达 is not a recent invention. It’s a variant of 達 attested as early as the oracle bone script [甲骨文jiǎgǔwén].

is also a meaning component. 达 is a picture of a guy walking across the road. The original meaning was “arrive at point b from point a”. 達 is the same thing, but has a guy leading a sheep from point a to b.