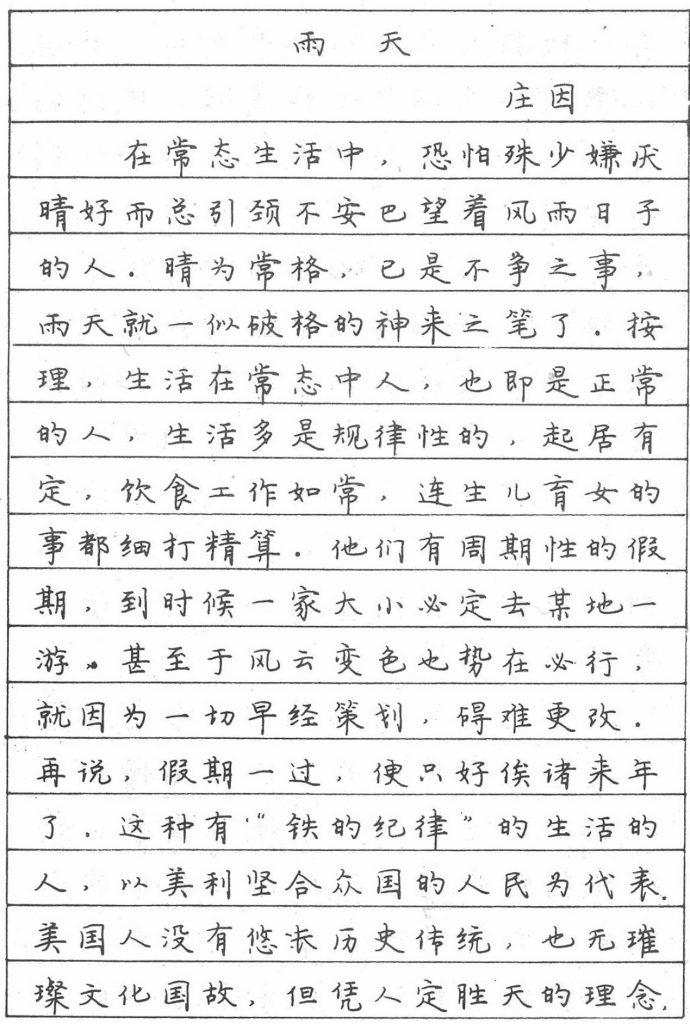 For people who are learning languages other than Chinese, the question of how to improve handwriting doesn’t come up often. Some people are interested in penmanship and calligraphy, but that’s beyond writing merely to communicate, more art than language.

For people who are learning Chinese, there are a lot of things to say about handwriting. In this article, I will cover most of them, albeit briefly in some cases. Here are some of the questions that I will answer:

Why handwriting in Chinese is hard

Let’s start with the basics in case you’re new to learning Chinese. Almost all languages use a phonetic script, meaning that the written word reflects the pronunciation of the spoken language. The most familiar way for most readers ought to be the Latin alphabet I use to write these words, but even seemingly complicated scripts like Arabic and Korean are phonetic as well.

Chinese, on the other hand, uses characters, which were created in many different ways. The basic characters have nothing to do with pronunciation, but are instead depictions of objects, called pictographs. More complex characters often do include clues about how they are pronounced, but these require an advanced level to make full use of and are just that: clues. This means that to read and write Chinese characters at a near-native level, you need to learn many thousands of characters. For more about how the Chinese writing system works, please check out the series of articles starting with this article:

The building blocks of Chinese, part 1: Chinese characters and words in a nutshell

Handwriting Chinese characters is extra tricky because of the large number of unique components and the even larger number of combinations of these components you need to keep track of. Recognising a character in context, such as when reading, is much easier than writing the same character by hand. It’s perfectly possible to be able to read well, but not be able to write much by hand at all, and this is indeed quite normal. Native speakers typically spend a, for us, unimaginable amount of time learning to write characters, which both impractical and difficult to match as a second language learner.

Given the amount of time it takes to learn to write by hand, do you really need handwriting? Since the most popular input systems on phones and computers rely on how the characters are pronounced, can’t you just skip handwriting altogether? This depends on your goals. If your goal is to learn only spoken language, then skipping handwriting, or indeed writing altogether, is not a problem.

However, most students want to learn to read and write too, although to a more limited degree. That means that you would know how to say more things than you could write, for example, which seems to be the most natural way to me. I have argued elsewhere that delaying character learning should be the default option in most cases, see for example Should you learn to speak Chinese before you learn Chinese characters?

It also seems natural to be able to write fewer characters by hand than you can type, but this doesn’t necessarily mean that you should skip handwriting altogether. I think all students who want to learn to read and write Chinese characters should also learn to write by hand, not because it is practically useful (it usually isn’t, even if you live in a Chinese-speaking environment), but because it helps you understand Chinese characters. It’s up to you to decide if that means learning 100, 1,000 or 5,000 characters. Read more here:

What you need to write a Chinese character by hand

Okay, let’s continue by looking at what writing a Chinese character required in terms of knowledge and skill. Success depends on being able to:

As you can see, this is more complex than writing by hand in other languages, where handwriting is mostly a slower and, at least for some, more frustrating way of typing. If I can type a word in English, I know how to write it by hand. This is not true in Chinese, where typing merely requires you to recognise a character, whereas handwriting requires much more, as I have just shown.

When it comes to improving handwriting, it helps to separate intent and execution:

To illustrate with an example, I know very well how to write the character 想 (xiǎng) and you probably do too. But does the character come out the way you intend every time? Probably not, unless your penmanship is already on an expert level. You’ll be able to spot things you didn’t write intentionally. Perhaps the 木 takes up too much space, or the bottom of 目 extends to far down, or the dots in 心 accidentally touch the hook. You didn’t intend for that to happen, yet it did. If you write the character again, you might or might not get the same result.

The point is that intent is much more important than execution!

Compared with speaking and pronunciation, it’s often easier to tell the difference between a mistake (a problem with execution) and an error (a problem with your mental image). For example, if you  intend to write 目 (mù), you won’t write 日 (rì) by accident, and if you intend to write 木 (mù), you’re unlikely to write 未 (wèi) instead. If you do, I would take that as a clear sign that you probably don’t know the characters very well, so that’s a problem with intent, not execution.

As a counter example, if you write 未 (wèi) instead of 末 (mò), or 已 (yǐ) instead of 己 (jǐ), that could very well be sloppy writing. I can’t know by looking at a single handwritten character whether you just accidentally put the pencil down too early (a problem with execution) or if you don’t know how to differentiate these characters.

When you start learning Chinese, it’s important that you have models to mimic that are actually correct, or at least models that adhere to the standard in whatever region you’re focusing on. This is true for spoken Chinese and pronunciation as well, not just handwriting. Your teacher and textbook probably make an okay job of this, although there will always be some inconsistencies.

Today, however, most people study Chinese using their phones and computers. When you do that, make sure you have proper fonts installed. This will avoid a lot of confusion later and is well worth spending some time on as you start out. I didn’t do this when I started learning Chinese, but soon realised that I had actually learnt Japanese standard for many characters, because that was what my computer used by default!

I have written two articles to help you sort out font issues:

How to verify that you use the right Chinese font

How to practice execution

Assuming that you know what the correct character looks like, how can you improve your execution, or your ability to transfer your mental image to paper using a pencil? The answer of course depends on your current level, but I’ll give some general advice:

Resources for learning or improving handwriting

There are many apps, websites and books about handwriting and Chinese characters. This is not meant to be an exhaustive list of all resources I am aware of, but is rather meant to include a few helpful resources of each kind. For more, check Hacking Chinese Resources.

* Please. note that I work for Skritter, but that I’ve recommended the app long before I started doing that.

The place of handwriting in your overall strategy for learning Chinese

As a beginner, you probably don’t need to think too much about how handwriting fits in the larger scheme of things, but as you progress, you need to ask yourself what you want handwriting for and then devise a strategy that suits your needs.

For example, I teach Chinese, and value the ability to write most commonly used characters for that reason. I hardly ever write by hand in other situations, so if it weren’t for the teaching bit, I would spend less time on handwriting. I came up with a rather simple method to achieve my goals, yet spend as little time as possible on handwriting.

This method works for me, but it might be overly ambitious for you! Or it could be that you care much more about handwriting than I do, in which case my approach will be inadequate. I wrote more about my minimum-effort approach here:

Interested in how to learn to read other people’s handwriting? Continue reading here: