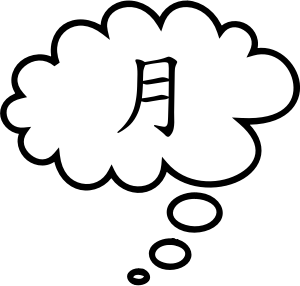 When learning to write Chinese characters, we need to remember that what we have in mind and what we actually write aren’t necessarily the same thing. In other words, what we intend to write isn’t always what comes out.

The difference is important. The goal of learning to write is mostly concerned with intent; you want to create a mental model of the language that resembles that of a native speaker. You might not be able to write a character perfectly every time, but that matters little if your intent is correct. With enough practice, you’ll be fine.

When learning to write Chinese characters, focusing on intent is key

This idea of focusing on intent has been mentioned on Hacking Chinese earlier, in a guest article by Harvey Dam (Handwriting Chinese characters: The minimum requirements). He adds another valuable observation that shows how important intent is. If you want to write the character 月, it will come out slightly different every time, even with a perfect mental image of the character. Some strokes will be too long, others too short and so on. This is natural. However, if you have the correct mental representation, you will never write the character shown on the right.

The difference between intent and result can cause problems, though, because other people can’t look into your head and know what you intended to write, they can only inspect the final result. This includes teachers. If they see the incorrect 月 above, they can be pretty sure you don’t know how to write the character, but if you accidentally forget to hook the last stroke, that’s not necessarily because you didn’t know it was supposed to be hooked. To be on the safe side, teachers will treat all mistakes as errors and correct them the same way.

What’s the difference between a mistake and an error?

I have discussed mistakes and errors before (Four different kinds of mistakes: Problem analysis), but let’s look at the basic difference again:

How does this relate to intent? It’s very straightforward: intent is directly related to your mental model (that’s what it’s based on). If your intent is correct, you might still make a mistake, but there will be no errors in your output.With practice, the number of mistakes will drop. If your intent in incorrect, you will only be able to get it right in cases where your faulty model overlaps the real one. The larger the overlap, the harder the error is to spot.

How not to learn to write Chinese characters

One of the most obvious areas of application is character writing. The first lesson and most important lesson is that you have to know what you intend to write before you write. Here are a couple of very common ways of practising characters that don’t allow you to monitor your intent properly:

Below, I’m going to provide a solution to the problem, but in case you want to read more about different ways of learning to write characters, I have written two articles you will find interesting:

How focusing on intent can help you learn Chinese characters

The main goal of this article is to highlight the importance of what you intend to write before you receive any kind of feedback. Since this problem is purely in the mental domain and not directly related to what tools you use, you can take care of the problem literally without lifting a finger.

Simply visualise the whole character, component by component (or stroke by stroke) before you start writing it. If you can’t do this, you probably don’t know the character. If you tried to write it down on a piece of paper, you’ll probably get stuck. Naturally, you should be aware of the risk of cheating (intentionally or otherwise). If you want to make really sure you know a character, you have to actually write it down on a blank paper with no corrective feedback at all. You don’t need to do this all the time, but occasionally writing by hand is a good reality-check, regardless of what other tools you’re using.