If you plan to learn to read or write Chinese on any kind of decent level, you will need to learn parts of characters (components) and parts of words (characters). There are an untold number of combinations of character components, and studying only the multitude of end-results is horrendously inefficient. This would be a little bit like learning maths by studying thousands of examples, but never actually looking at the underlying equations. 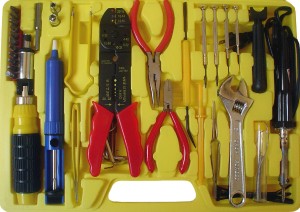 Thus, you need to start assembling a toolkit for learning Chinese. The tools might not be useful in themselves (though some are), but they will enable you to learn Chinese much faster. This is a long-term investment that will continue to pay off for as long as you study Chinese.

Your toolkit consists of many different levels, from the detailed to the more general. In this article, we’re going to look at the most basic level, the character components.

All Chinese characters can be broken down into components, or are so basic that they themselves are already in the simplest form. The important thing to realise is that even if you want to learn thousands of characters, the commonly used components are much fewer than that, so what you should do is learn components, then learn how to combine these into all the other characters.

I can hear some people mouthing the word “radical” now, so it’s time to explain what’s what. A character component is simply just that, a part of a character. There is no complete list of these and it’s a  vague term. A radical on the other hand, is also a part of a character that is also part of predefined list that is used to index Chinese characters (in dictionaries, for example).

These days, you never have to use a printed dictionary if you don’t want to, so the distinction between character components and radicals is not very important when we’re building our toolkit. However, as we shall see, radicals are useful because some of them are very common parts of characters. In other words, a character component can have several different function in a character.

Character component typically have one of two functions:

This article is about the first kind, but the other is perhaps even more important! I have written two separate articles about those components:

Getting started with semantic components

If you just started learning Chinese, I suggest that you look at a list of common radicals and their meaning. Don’t learn how they are pronounced, focus on what they look like, how they are written and what they mean. There are only 214 radicals in all, but of these, the latter half is more rarely used, so learning 100 or so would take you very far.

Learning these shouldn’t be too hard. Many of them are pictographic, meaning that they are actual drawings of objects in the world. You will also see and use these characters so often that you will learn them sooner or later. If you want to practise handwriting characters with feedback, I suggest using Skritter, which combines responsive feedback and spaced repetition, making learning characters a more convenient.

After having learnt the most commonly used radicals, things become fairly straightforward. If you see something weird once or twice, you can safely ignore it because it probably isn’t important, but if you see it more than that, you should look it up. Slowly, you will build up a register of character components you are comfortable with. This is the key to learning new characters with ease.

You don’t need to catch ’em all

As I’ve said earlier, not all character components are radicals, so don’t be too loyal to your list of radicals. The easiest way to break characters down is using one of various websites or computer programs made for this purpose (there are also books, especially for beginners). These are usually interactive, so you can just click on a specific part of a character to see what it means. I’ve used such tools a lot and it saves more and more time the more characters I learn.

What the tools are for