The HSK (汉语水平考试, Hànyǔ Shuǐpíng Kǎoshì) is the dominant proficiency test for learners of Chinese. As such, its main purpose is to assess the language proficiency of foreign students, yet many use it for more than that, regarding the HSK more like a roadmap to learning Chinese.

Is this a good idea?

If you use the HSK as a roadmap, is there anything you should keep in mind?

I’ve been pondering these questions ever since I realised that many students structure their entire learning experience around the HSK. At first, this seems odd, considering that it’s just a test, not a curriculum. Sure, it’s great to assess your level regularly to benchmark your progress, but is it wise to focus on HSK beyond that?

Let’s have a look!

Before we try to answer the questions posed above, it’s good to explain the basics of the HSK. In essence, it’s a proficiency test based on the Chinese Proficiency Grading Standards for International Chinese Language Education (国际中文教育中文水平等级标准, guójì zhōngwén jiàoyù zhōngwén shuǐpíng děngjí biāozhǔn), administered by Hanban  (汉办, Hànbàn), an institution affiliated with the Chinese Ministry of Education.

The standards underlying the exam was changed in 2021, but the lower levels of the exam (1-6) still haven’t been updated to reflect this, while the new higher levels (7-9) have been rolled out. I wrote more about the new HSK 3.0 here:

Beyond the standards and the test itself, there are also various support structures that use the HSK name, including textbooks and courses. These are not strictly speaking part of the exam, but can make HSK more resemble a curriculum. Beyond the name and the close adherence to the standard, these learning materials have no obvious benefit over other learning materials. A textbook or course isn’t better just because it has an official stamp of approval. And of course, anyone can create learning materials aimed at a specific HSK level!

HSK as a Chinese proficiency test

Before we go into using HSK as a roadmap to learning Chinese, let’s have a quick look at a couple of obvious reasons why HSK can be useful for learners of Chinese:

Still, as a proficiency exam, the HSK does okay. I think the new (3.0) standards are considerably better than the old (2.0 standards, and it’s good to see that the levels are brought closer to other international standards for language proficiency, such as the Common European Framework of Reference for Languages (or CEFR; check this article about how to self-assess your proficiency using this standard).

Level 6 in HSK 2.0 was nowhere near the advanced levels of CEFR (C1 and C2), and even though I have yet to see analyses of how HSK 3.0 compares, it’s certainly an improvement. It’s likely that the new advanced level (7-9) can really be used to show that you have full working proficiency in Chinese, which wasn’t possible before.  This makes the HSK more useful as a proficiency exam! It also allows more advanced students to benchmark their progress.

HSK as a roadmap to learning Chinese 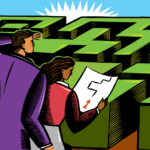 As I said in the introduction, many students use HSK as something more than just a test. If you browse online forums, message boards and chat rooms, you will often come across students who are “working their way through HSK 4” or are dismayed by the increase in difficulty of HSK 3.0. This indicates that they are viewing it as a roadmap to learning Chinese, a curriculum if you will.

At first, this might seem backward, but there are some good reasons for using the HSK as a curriculum:

As we can see, there are good reasons to use the HSK as more than just a proficiency test! Still, I think this is mostly misguided, and students take the HSK much too seriously.

The (road)map is not the territory

Let’s have a closer look at students who are dismayed or even upset that the HSK standards are changing, so the new 3.0 is considerably harder than the old 2.0. There are few cases where this is a reason for legitimate concern, but this is extremely rare. As I explained in my article about HSK 3.0:

There are many students who care a lot about HSK, probably because it provides a roadmap to learning Chinese. That’s fine! But remember, the HSK is just a yardstick against which you can compare certain aspects of your proficiency; it’s not the language itself!

Changing the yardstick does not change what it measures. I’ve seen many students who are dismayed by the fact that the level they are working towards now will be equal to a lower level according to the new standard. For example, the current HSK 3 contains roughly the same amount of vocabulary as the new HSK 1 (600 and 500 words respectively). If we measure only vocabulary, someone currently at HSK 3 would then in theory be “downgraded” to HSK 1.

So what? Your Chinese proficiency does not change because of how many words are listed under a certain number in an official document. The language itself does not suddenly become harder because more is required for a certain level on an exam. Your ability to communicate in Chinese is the same on June 30th as it is on July 1st. Nothing has changed.

Being upset about one’s ability being “downgraded” from HSK 3 to HSK 1 is a bit like a golfer being disappointed that their drive is suddenly shorter when measured in metres instead of yards after taking a flight to a European tournament: “Oh, I guess I’m 10% worse than I was yesterday.” That’s clearly nonsense, and so is worrying about your Chinese being “downgraded”.

The way we measure something like this does not change the thing measured. The map is not the territory. A proficiency test is not the language itself.

The only case where this does not apply is if you truly need the certificate itself, because since the higher levels are more advanced than before, it becomes easier for companies and institutions to also raise their requirements. Still, bear in mind that most serious companies and institutions will check your actual proficiency, beyond any certificate you might or might not have!

So, finally, here things to think about before you start treating HSK as roadmap or curriculum:

In essence, passing the HSK proves you can do some things, but these may or may not be the things you actually want to use the language for.

If someone does pass a certain level, it tells you quite a lot, though. For example, someone who does well on the HSK 7-9 reading or listening is guaranteed to be fairly good at reading and listening, there’s simply no way to fake that.

However, if someone does not pass a certain level, this doesn’t tell you much at all. For example, someone might be good at Classical Chinese poetry, but read modern Chinese too slowly to be able to pass an advanced reading test, or someone might amazingly good at communicating with native speakers in real-life situations, but not used to formal listening tests and thus fail the exam.

I’m not saying you should never use the HSK for anything beyond benchmarking and certifying your Chinese proficiency, but I am saying that you need to be aware of the above issues if you treat HSK more like a curriculum.

How you measure progress influences how you study

Another danger is that if you take the HSK too seriously, the way you measure your proficiency will start influencing how you study. This might result in strategies like:

These are severely misguided, yet this is where you will end up if you let the way you measure progress influence you too much, a problem I’ve written more about here: The importance of counting what counts when learning Chinese.

The importance of counting what counts when learning Chinese

Conclusion: Using HSK as a roadmap to learning Chinese

I think we can summarise this discussion about the HSK in two important insights:

Have you taken the HSK? Are you using it as just a proficiency test? Or do you use it as a roadmap too? Let me know what you think in the comments below!