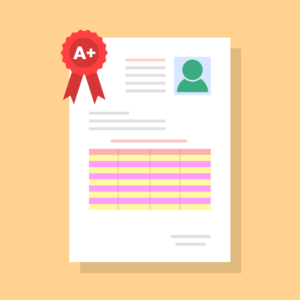 In an ideal world, everybody would be studying Chinese according to their own goals. Then, the challenge is to figure out what way of studying is the most efficient for you.

However, for most people, studying Chinese  an extra layer of requirements added on top of any personal goals; a layer of grades, tests and qualifications.

Studying Chinese when your grades matter

In some cases, this extra layer imposed by institutions, companies or organisations might even be more important than your personal goals. In extreme cases, the external goals might indeed be the only reason you’re studying Chinese. Perhaps you need those credits to get into the program you want or our parents forced you to take Chinese in school, even though you didn’t want to.

There are extremes in both directions, of course, and most of us will find ourselves somewhere in the middle, i.e. personal goals are important, but we can’t afford to ignore grades or tests completely. If you only care about grades, I think you will fail unless you find some way of enjoying what you’re doing. If you don’t care about grades at all, you don’t really need this article.

Before we go into this in more detail, let’s first discuss an underlying assumption. For this article to make sense, there has to be a significant difference between personal goals and external goals, but is that really the case?

I think it is. It’s extremely unlikely that the requirements of the course you’re enrolled in or the test you’re required to take are identical.

There is also a difference between actual ability and performance on at est. Answering multiple choice questions is not the same as listening to a lecture, writing a short essay on a random topic is not the same as writing a letter to someone in Chinese. In short, you can be very good at Chinese and still fail tests. Conversely, you can pass exams and still lack crucial skills you aren’t being tested on.

I think that this is a problem with measurement (i.e. how do we measure progress, success or proficiency), something I’ve written more about in this article: Counting what counts. Having made this clear, let’s get into to the discussion of how to handle grades of various kinds and make sure you get the best grades possible.

I will focus on three aspects:

The same is true for courses, where it can be even harder to figure out what’s required because of individual differences between teachers or an opaque grading system Still, i you don’t know what is required of you, the rest I have to say in this article won’t help you much, so make sure you figure that out first.

The next step is to figure out which parts will give you the highest number of points for the least amount of effort. This holds true both for when you prepare for an exam and when you actually take the exam.

When preparing, focus on what’s likely to give you many points without costing you too much time. In my opinion, this mostly involves fixing your worst problems, rather than honing the skills you’re already quite good at. If grammar is your weak point, increasing reading speed by 5% will probably help less than drilling grammar patterns all those hours it took to increase the reading speed.

When taking an exam, you need to be very clear about how scoring works. For instance, earlier this year, I took the TOCFL (Test of Chinese as a Foreign Language, Taiwan’s version of the HSK), and since the test is arranged so that the questions become gradually harder but still have a fixed number of points, it doesn’t pay off to rush through the early parts of the exam. In other words, you need to spend more time for each point late in the exam compared to early in the exam.

A particular point of interest is the grammar/vocabulary part, which gives you many, many points without having to read a lot of text. This is where you can get the most points per unit time. Having looked at the requirements carefully, it is also clear that you can afford to miss quite a number of questions on the reading part and still pass, so it makes much more sense to go through questions carefully and run out of time rather than rush through. This is not obvious if you don’t analyse the test. It might not be true for other exams or later versions of the same exam either, for that matter.

When doing scientific research, the practice effect is something that can skew the results. For instance, if we want to figure out if study method A is beneficial for preparing for an exam, we can’t test the students too often, because if we do, we don’t know if they improved because they used study method A or because they practised (and thus got better at) taking the test.

When you care about grades, this is good, because you don’t really care what gives you the good results; as long as the results are good, you’re happy.

Taking a test requires a set of skills which is unique and you need time to adjust to the requirements of the test. A good example of this is IQ tests on the internet. If you do several consecutive tests that contain similar exercises (or if you do the same test more than once), you will of course receive a higher score, but it would be naive to think that this implies that you have increased your overall IQ.Your increased score is due to the fact that you’ve become more proficient at taking that particular kind of test.

Everything is hard the first few times you try; Chinese proficiency tests are no exception. Thus, take as many mock exams as you can, sign up for any pilot tests or do whatever practice questions are available. If you’re taking a course, ask your teacher for last year’s exam and practice on that. This is likely to be the most efficient way to increase your score and also allows you to identify problem areas where you might need to spend more time.

How to get good grades when studying Chinese

Passing a difficult test or a demanding language course isn’t something you can expect to do just relying on your general proficiency level. Sure, if you’re level is way above the required level, you should still be fine (after all, most native speakers would do very well on Chinese exams for foreigners, even though they haven’t prepared at all), but if that’s the situation you’re in, I don’t think you would have read this far.

No, passing an exam or receiving good grades in a course is based both your general proficiency and your ability to apply that proficiency to the particular exam or course in question. This latter part requires practice, analysis and some planning to achieve. Thus, even though it’s obvious you need to know the language, too, don’t overlook the structural aspects of proficiency exams and language courses if you want good grades!