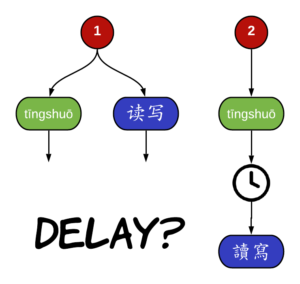 For example, you can first listen to a dialogue, then talk about it, and then finally read the transcript and learn to write the characters. This is very different from delaying character learning for months or even years, becoming fluent in the spoken language before even starting to learn the written language (that’s what native speakers do, of course).

Another approach is to treat the written language as a completely separate entity, that could be learnt either in parallel with, after or even before the spoken language. Such an approach acknowledges the fact that something that is easy to say is not necessarily easy to write, and if you learn to write what you learn to say, the learning curve will be very steep indeed.

Compare starting with writing characters like 我, 你 and 是, which are all extremely common in spoken Chinese, with starting with basic building blocks first and gradually building up to more complex and irregular characters.

These types of approaches are very rare in formal education, and in this article, I will focus mostly on the timing issue, rather than whether or not you should learn to write the same words you learn to say. It’s worth noting, however, that the character course I’m currently building for Skritter uses this approach.

If you’re more interested in how to learn character rather than when to learn them, I suggest you head over to this article instead:

The reason the question of delaying character learning is a hotly debated topic is that it’s possible to argue either way, depending on your own opinions about what the meaning and purpose of learning Chinese is.

It’s easy to argue that writing should be delayed for the simple reason that it takes an awful lot of time to learn characters, and if you’re supposed to learn to write everything you learn to say, you will make very slow progress compared to students learning any other language, except Japanese. Besides, the spoken language is the real essence, the thing that makes us human, whereas writing is an artificial construct.

…or not to delay learning Chinese characters

But it’s also easy to argue the opposite, and say that the written and spoken language are intertwined, and that you can’t really say that you’re learning a language if you’re only focus on one side of it. Are you really learning Chinese if you don’t learn the characters?

While I have nothing but personal experience to back this up, I have a feeling that native speakers who teach Chinese fall into this category more often than non-native speakers.

Some people also claim that Chinese can’t really be understood without the writing system, claiming among other things that communication would break down if Pinyin (a proxy for spoken language) was used instead of Chinese characters.

Regardless of the validity of such claims, it’s clearly nonsense if we’re talking about the majority of people who learn Chinese as beginners and intermediate learners. It’s perfectly possible to become fairly advanced in a language without knowing how to read and write, even if this comes with some problems of its own (more about this later).

The debate is further complicated by the fact that it’s almost impossible to do empirical research to prove who’s right, because there are so many variables involved. How long is the delay? What is the purpose of the program? Who are the students? Who’s teaching them? How are they being taught? And so on.

For an overview, see Ye (2011) whose dissertation strives to answer this question and has a comprehensive overview of the literature. For those who want to read more, I have added more articles to the reference section at the end of this post. One thing most people seem to agree on is that delaying character learning is great for developing spoken proficiency, but this ought to be fairly obvious.

Yes, you should delay character learning one way or another

In general, I think it makes sense to delay learning characters in favour of developing the spoken language first. That doesn’t have to mean that the entire process is delayed for months or years, just that I think you make sure you have a solid foundation in the spoken language before starting to learn characters seriously.

The problem with learning characters is that it takes too much time, and that it will slow down your learning. The writing system is of course one of the main reasons that learning Chinese is difficult, and if you remove or at least postpone the introduction of that obstacle, you can learn the language at several times the speed.

You also free up time to use in more important areas. Spending time learning characters instead of mastering pronunciation is a really bad idea, and one you will regret later. Doing the opposite, neglecting character learning for some time until you’ve grasped pronunciation, has no serious drawbacks at all.

If you can already speak basic Chinese, learning the writing system becomes much easier as well. You now have those pesky tones and tricky initials and finals under control, freeing up mental capacity to tackle Chinese characters. Furthermore, there’s lots of research in support of phonology playing a role in reading Chinese, even when reading silently (see for example Ziegler et al., 2000).

Reasons for learning Chinese characters along with the spoken language 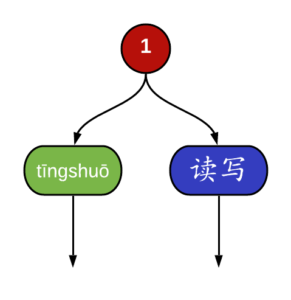 I still don’t recommend that you learn to write everything you can say, but rather that you put some significant effort into both areas at once. If you put the same amount of effort into both, your reading and writing will still lag far behind your listening and speaking.

So, the bottom line is: Yes, you should delay character learning, at least until you have a good grasp of basic pronunciation. This doesn’t mean that you should learn zero characters, it just means that learning characters shouldn’t take up a large proportion of your study time. Later, you can ramp up character learning as much as you want, depending on your goals for learning Chinese.

Even if you are learning the spoken and the written language in parallel, as most of us do, you can still sequence the learning in a way that emphasises the spoken language first, and makes sure that reception comes before production. In essence, that means:

This results in a sequence that looks as follows: 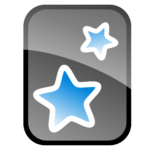 Depending on what software you’re using for vocabulary learning and reviewing, this can be handled in different ways. Anki is very flexible in this regard, so I will use it for this example, but you can achieve similar results with other software too.

In theory, each word you learn can have four different flashcards:

If you want to learn a bunch of words, such as key vocabulary from a story, you then go through the sequence in order. You add all four cards for each word, but you suspend all except the listening card. You then go through those words for a few days or weeks focusing only on listening until you feel comfortable with them, after which you activate the speaking cards and have a go at them. You then move on to reading and writing, although you can of course treat the spoken and written language separately here if you prefer.

For details about how to set up audio flashcards, please refer to this article:

This approach is good because it eases you into speaking and writing. It’s very hard to know how to say things correctly if you’ve never heard them before, and the same is true for writing something you haven’t seen enough. This is especially true for beginners and extra especially true for pronunciation!

To make the most of this approach, you should be at different stages in the cycle for different words, so you don’t take a batch of words and see them through the whole process before you start with the next batch. Instead, you might have one set of words at each stage, adding a new set only when another set exits the process (nothing ever really ends, of course, but rather moves into long-term retention mode).

Sadly, many Chinese teachers force you to say things immediately after hearing about them for the first time. Here is a sentence pattern, it works liket his, here is one example, now make your own sentence!

A simpler and more natural approach 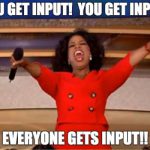 An introduction to comprehension based Chinese teaching and learning

Another way to use the same principles, but without having a mechanistic approach to vocabulary acquisition, is to simply focus a lot on comprehensible input (listening and reading), then make sure you recycle content enough before you try to do anything active with it.

For example, you listen to a story many times before you start figuring out how to use the words in it by talking about the story with a friend or tutor, or you select which Chinese characters to really learn to write by hand by choosing those that you have already seen many times in your reading practice.

Sequencing is a very complicated question when it comes to learning spoken and written Chinese. I don’t pretend to have all the answer, but I hope that you have gained some insight into some of the questions in this area of learning Chinese, and that this can guide your own approach.

Like I said, one key factor is what the goal of learning Chinese is. If you’re the director of a Chinese program at a university, you will make this choice for all your students, but if you’re a student yourself, it’s up to you what you want to do, and you should choose whatever approach suits you and your ambitions best.

For most people who aim at  long term proficiency in both spoken and written Chinese, I think the case for delaying characters is very convincing.

Ye, L. (2011). Teaching and learning Chinese as a foreign language in the United States: To delay or not to delay the character introduction.