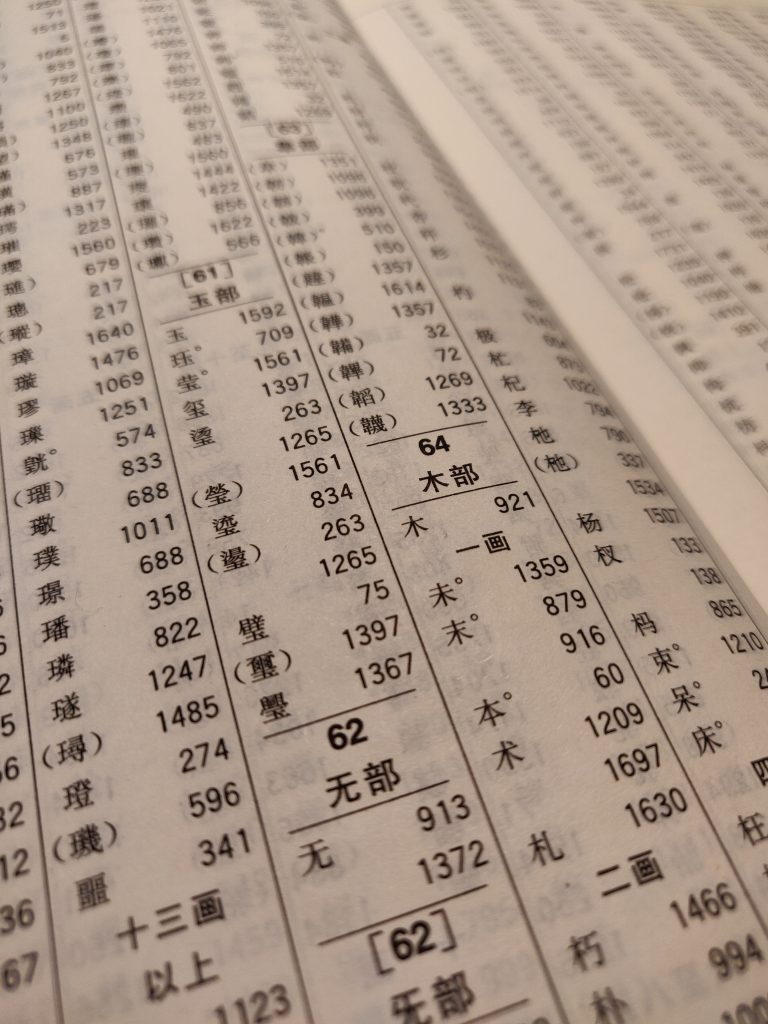 As soon as students realise that Chinese script is not an alphabet, and that there are thousands of characters they need to learn to become literate, one of the most common questions from beginners is how to look up a new character. A related question common to hear from people who don’t study Chinese is how characters are typed on computer and phones, which I explained in great detail here:

These questions are related, because if you can get a version of the unknown character you can copy and paste, you can just search for the character and thus learn its meaning and usage. In this article, I will focus on various ways of looking up Chinese characters, along with their pros and cons for students, but I will discuss kinds of tools and methods, rather than discussing in detail specific tools and methods.

If you’re looking for specific dictionaries, please check this article:

The need to compile dictionaries and look things up in them has of course existed since writing systems were invented. In phonetic languages, this is not very complicated as the obvious way to structure such a dictionary is to define a sequence of letters and then sort words according to how they are spelt.

That doesn’t work as well for Chinese, however. Characters can be pronounced, of course, but what about characters that have multiple readings? And since the pronunciation often can’t be predicted from the written form of the character, how do you look up a character if you don’t know or have forgotten how it’s pronounced? Modern paper dictionaries often contain look-up tables based on pronunciation, and many dictionaries are indeed sorted by pronunciation, but that only helps you if you already know how the character is pronounced! Clearly, another way is needed.

This is where the term radical comes in (部首 in Chinese). By sorting characters according to their component parts, it’s possible to compile a dictionary that is not based on pronunciation and let’s you look up any character you want. Of course, each character is only sorted by one of its components, and this component is called the radical. Which component that is varies across time and space. For example, Shuōwénjiězì (說文解字) has 540 radicals, but the more modern (18th century) Kangxi dictionary (康熙字典) has 214 radicals, which is the standard set still used today.

To look up a character in a paper dictionary, you first identify the radical. This is sometimes easy (in compound characters, it’s usually the meaning component on the left), but sometimes impossible if you don’t know the answer in advance. You then count the number of strokes in excess of that radical and look for that place in the dictionary. Even though this is a digital version, you can still get the idea by checking the radical look-up method on MDBG here. Let’s say you don’t know what 样 means. You can (correctly) guess that the radical is 木.

That was easy! It can take a few minutes if you’re not used to counting strokes and you have to flip through pages looking for what you’re after, but unless you’re looking up things all the time, it’s not so bad. Except that’s exactly what you need to do all the time, unless you only read texts specifically written for you with prepared word lists. When I started learning Chinese, which was right before electronic or digital dictionaries became common, I spent more time trying to find the characters than I did studying them.

The above case with 样 is also very easy. There are many cases that are more or less impossible to figure out unless you know the answer in advance. For example, what’s the radical of 渴? How many strokes does it have? Well, the answer is 水 and it has four strokes. Good luck finding the character if you don’t know this! Or another example: What’s the radical in 五? Or simplified 兰？What about 卤/鹵? Well, it’s 二 and 八 respectively, and 卤 is actually its own radical, which is far from obvious. These are just a few examples; there are weirder cases.

The good old days were actually horrible and much time was wasted on things that did nothing to improve one’s reading and writing ability. Fortunately, there are better solutions these days!

Most of the above problems can be easily solved with digital technology, which means that learning to read and write Chinese today is much, much easier than it used to be. I don’t say that to diminish anyone’s accomplishments; learning to read and write Chinese with digital technology is still hard! If you want to read about the paperless revolution in Chinese reading from someone who started learning Chinese before I was born, I recommend this article by David Moser:

So, how exactly can you use a computer or your phone to look up Chinese characters? Well, to start with, you can do the same as in paper dictionaries, only now by clicking instead of flipping pages. This is an improvement, but not a major one since the main obstacles still remain. There are more options, though:

Once you’ve found the character in a digital dictionary, you can do whatever you want with it, including copying it and pasting it into any of the other resources I linked to above (21 essential dictionaries and corpora for learning Chinese).

If you follow Moser’s advice and spend at least some time reading digitally, looking characters up is obviously much less of a problem, as any pop-up dictionary or other tool designed for looking up characters in a digital text will give you instant information about any character you want, meaning that you can spend your time and energy learning Chinese instead of flipping through pages in a book. 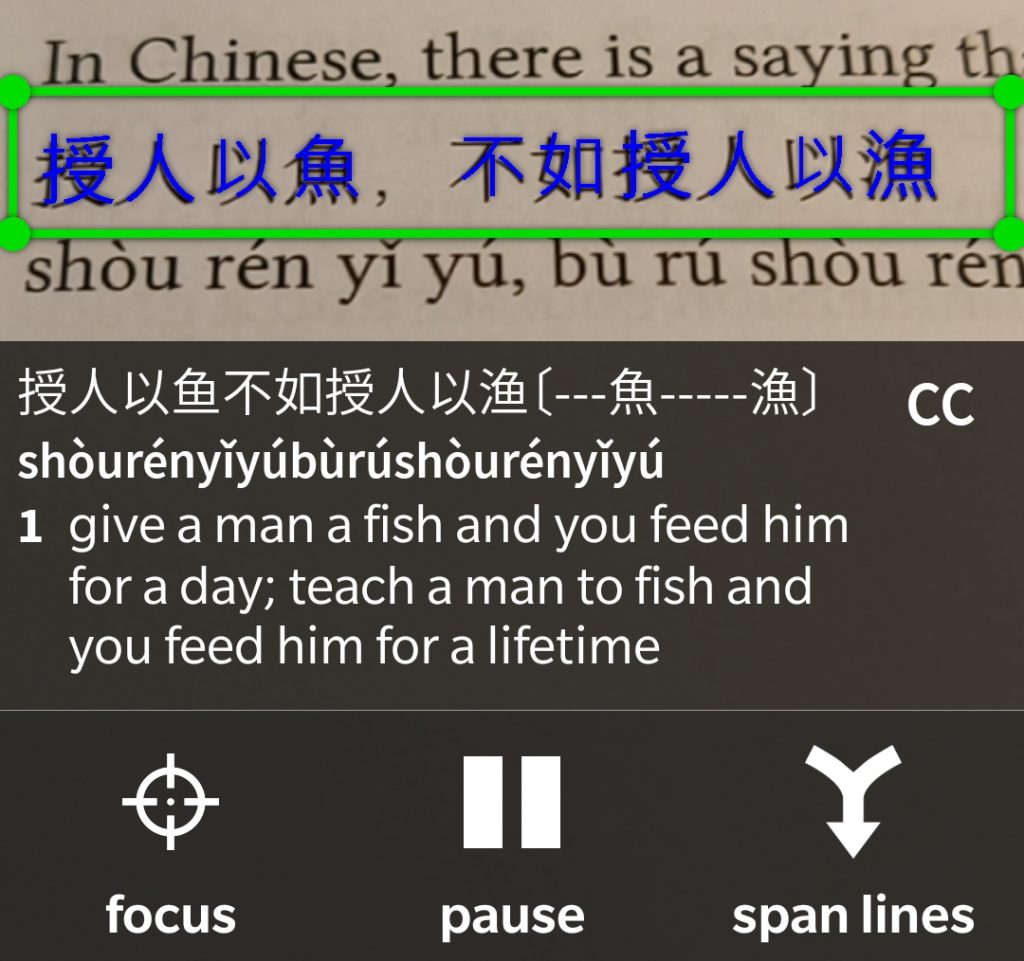 Looking up Chinese characters has never been easier, but it’s still harder than looking up words in many other languages. Paper dictionaries require some knowledge of Chinese to use and waste a lot of time that doesn’t really contribute to your learning.

Digital dictionaries offer a range of look-up methods, and which one you use depends on what you know and what you want to know. Once you’ve mastered basic stroke order, handwriting input is probably the easiest option, but later when you know enough about semantic and phonetic components to guess the pronunciation of characters, that is often quicker.

What method do you prefer? Have I missed some useful way of looking up an unknown Chinese character? Leave a comment below!