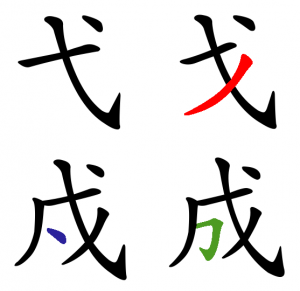 Do you know what the real challenge of learning Chinese characters is? Some people who are good at learning things but haven’t learnt Chinese ask what the problem is; memorising a few thousand facts isn’t that difficult.

That’s true, but it also misses the point. The problem with learning thousands of Chinese characters is to keep them separate from each other and remembering how they fit together into words and sentences. That’s the real challenge.

It goes without saying that this becomes harder the more characters you learn. For beginners, the main problem is to just learn the characters, but the more advanced you become, the bigger the problem of keeping things separate becomes. The things I talk about in this article will probably be more useful for intermediate and advanced learners.

Zooming in, zooming out and panning

In this series of articles, I’ve given you the information and resources you need to integrate the different levels of learning Chinese with each other, showing both how you break things down and how you put them in context.

In this final article, I will look at panning, which is horizontal references on the same level. In other words, it’s about how to keep components, characters and words separate from each other.

Before we get to suggestions for tools and resources for panning, there are two important principles I want to discus: making learning meaningful and the importance of tracing errors.

However, once you tie that to pronunciation and realize that characters that contain 良 are pronounced “-iang” (usually with “l-” or “n-“), while characters that contain 艮 are not (they are pronounced -in or -en with various initials), it’s much easier. The dot means something! I’ve written more about this in two articles about phonetic components:

You then use mnemonics to remember the difference. That means that you should have one specific mnemonic for 良 and another for 艮 that you can use to remember if there should be a dot or not.

The second thing you should do is to trace your errors. The more advanced your Chinese is, the more important this principle becomes. For example, if you write a character incorrectly, does the character you wrote mean something? What about the character component?

Continuing with the above of 良 and 艮, if you are to write 鄉 and can’t remember if there’s supposed to be a dot over 艮 or not, and don’t go to the bottom of the issue, you might study for years and still confuse the two character components.

However, by tracing your error to the source, you can solve the problems.In this case, it means learning about the phonetic components at work. And, most importantly, you not only solve this particular problem, you solve the same problem for dozens of other characters that also use 良 and 艮.

Naturally, not all errors lead to goldmines that help you solve all your problems. In some cases, the answer is lost in time or very hard to find.

Tools and resources for panning

While tools and resources were the main focus of previous articles, this article is more about being aware of the problem and the principles I’ve mentioned above. However, there are some resources that might come in handy:

That means the end of this little series of articles discussing how to better integrate your knowledge through zooming and panning. I hope you will find it useful!