We all know that near-synonyms cause major headaches for language learners. Due to the inadequacy of Chinese-English dictionaries, we can’t simply look up synonyms in a dictionary and immediately tell the significant difference between them. Using Chinese-Chinese dictionaries is slightly better, but isn’t enough except in a few cases (you need the right dictionary and the right near-synonyms). Also, most learners aren’t at a level where they can comfortably read Chinese-Chinese dictionaries. 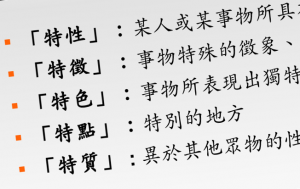 To give you an idea of what I’m talking about, look at these five words: 特色，特点 (特點)，特性，特质 (特質) and 特征 (特徵). They all translate to something like “characteristic” in English, but they are still not interchangeable in most cases and mean different things or have different collocations when appearing in the same sentence.

Before we look into “how” to deal with near-synonyms, we should say a few words about “why”. I’m a big fan of massive exposure in general and I think it’s possible to get very far simply by reading and listening a lot. However, as you will notice if you use one of the solutions suggested later in this article and use search engines to try to find discussions about the synonyms, you’ll find that native speakers are sometimes also confused about the usage of these words. They might use them occasionally, but asked about the difference between them, they sometimes aren’t so sure.

Explicit knowledge plus exposure is the solution

The key is to have an idea of what the difference is when you listen and read (which you should still do a lot, of course). If you have no clue what to look for, you risk hearing the words hundreds of times, but because you don’t know anything about the difference, you get no corrective feedback at all. Some words are functionally identical and are interchangeable in sentences, but yet mean different things. If you don’t get that difference in meaning, exposure, no matter how much, won’t solve your problem.

How to sort out near-synonyms in Chinese

Here are some things you can try (but remember the rules of successful language question triage):

To be honest, cracking the problem of near-synonyms is very hard at times, especially if your question doesn’t belong to the most frequently asked questions about Chinese usage. What makes it even harder is that there are always exceptions or strange cases, but as I have argued in an earlier article, you should spend 90% of the time on 90% of the cases, so don’t concern yourself too much with the 10% of cases that don’t follow the pattern you have found. Also, if an answer is hard to find, you should consider giving up and just spend your time elsewhere.