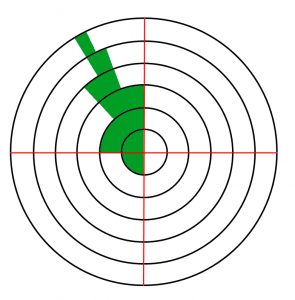 This is what your knowledge will look like if you only study one textbook series.

Starting to learn Chinese is like parachuting into a foreign land; studying the language is like exploring the landscape around you. In this two-dimensional model of learning, you can move in two directions: farther away from your base camp (meaning that difficulty increases) or sideways (maintaining the same difficulty, but for other topics).

In my experience, many courses and textbooks tend to move away from the base camp too quickly, meaning that too advanced content is covered too early. This gives an illusion of advanced learning, whereas in fact, large areas of more basic language remain unexplored. Learning advanced vocabulary and grammar is mistaken for actual progress, which is much more about how well you can handle much more basic vocabulary and grammar.

The illusion is maintained because each chapter builds on the previous, so by the time you reach book four or five in most textbook series, the language is quite advanced, both in terms of vocabulary and grammar. However, the advanced level is only achieved in a very narrow, carefully marked part of the landscape. If you move sideways, out of the marked area, the illusion will shatter. This partly why there is a gap between classroom Chinese and real Chinese.

In practice, this means that if you take a text in an intermediate or advanced textbook in Chinese, and just change the topic to something else, the text will become much too difficult. This is also one of the most common complaints I hear from students: they can understand what’s going on in their textbooks, but when they encounter real Chinese which isn’t specifically designed for them, they find it very hard to understand.

This result is perhaps not surprising, because after all, courses and textbooks want to give you the impression that you’re making progress, otherwise they’re not doing their jobs. This is okay, but it becomes a problem if you believe that you’re an advanced student just because you have reached book X in textbook series Y.

I often receive questions about this, such as “Will I be fluent in Chinese if I finish this textbook series?” or “How good will my Chinese be if I finish book four?” The answer to both questions is that which textbook you finish isn’t the point.

Thus, the illusion of advanced learning is only a problem if believe in it and stay within the safe confines of your textbook. This means you study gradually more difficult material, but neglect easier things you should actually learn first. 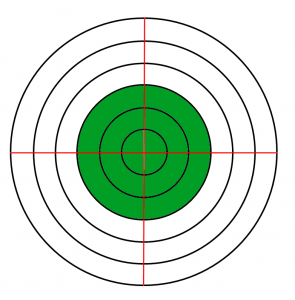 This is what you want your knowledge to look like instead.

What you should do instead

The solution to the problem is relatively simple. Instead of trying to get as far as possible in a textbook series, strive towards broadening your knowledge. This typically means you should learn many easier things rather than a few hard ones.

Thus, having finished a certain book says nothing about how good your Chinese is. I know people who have only studied their textbooks, and even though they have come far, they know little beyond the books and their ability to communicate is seriously lacking. I also know people who have learnt the basics very well and cane communicate well without necessarily being able to deal with the later chapters in the final books in the standard textbook series.

You want to be in the second group, not the first. What matters is how much you understand and how well you can use your Chinese, not which chapter you have reached in what book. Some students, teachers and institutions put a lot of weight on this, but it’s just an illusion. The only way of reaching a truly advanced level is by making sure the foundation is solid and build from there.