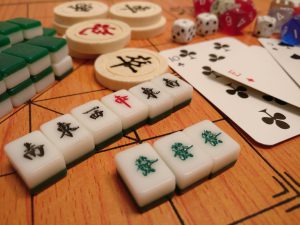 Games have great potential for learning in general and language acquisition in particular. There are many reasons to use games for learning and teaching Chinese, such as increasing motivation, having fun, focusing on function over form, creating a controlled environment for communication and making the learner more active.

While I have written several articles about games before, they all deal with particular types of games or in some cases specific games. In this article, I want to look at the bigger picture, and inspire you to use more games in your learning or teaching. Links to more in-depth articles will of course be provided when available!

Below, I have tried to present different ways games can be used to learn and teach Chinese, not so much based on the type of game, but how that game can be used. For each category, I will explain roughly how games can be used, and I will also provide a few examples. I will not provide detailed explanations for how certain games are played, but will provide links to more information about the games so you can check them out yourself.

Games that focus on language itself are excellent for learning. Some obvious examples in this category are word games such as Alias, Taboo or similar (games where you’re supposed to describe words verbally with certain restrictions imposed). I’ve used games in this way both when learning myself and when teaching Chinese and other languages, always with good results. I like them so much that I’ve written an entire article about them:

Unfortunately, most of the word-building games that are great in English don’t work in Chinese because there are no letters. Games like Scrabble, Boggle and so on don’t really work, or if they can be adapted, aren’t as fun or a lot harder. If you have suggestions for Chinese games that actually work for language learners, please let me know (there are tons that focus on chéngyǔ, but that’s not useful for a majority of learners).

Before we move on to the next category, I want to mention a game called Codenames. It’s one of the best word-related games I’ve ever played and it works well in Chinese too, but it requires at least a basic vocabulary to make sense. I have written an article specifically about how to use Codenames to learn and teach Chinese:

2. Playing games that focus on discussion and debate

There is a large number of games that are all about talking and work very well for language learning. Some of them do require a fairly advanced level if you don’t want the game play to suffer. Another problem might be that you need a number of friends who are  also learning Chinese or at least speak Chinese (all these games require more than two players).

First, games like Mafia or Werewolf focus on debating and arguing. If you already can speak Chinese reasonably well, playing such games with native speakers is both great fun and a great way to improve your speaking ability. There seems to have been a large increase in games like this recently, so there are plenty to choose from. You can also check Diane Neubauer’s post about playing Mafia in Chinese here.

Second, there’s also an increasing number of games that focus on discussion and debate, but which also have more complex rules and are, in my opinion, more interesting. Favourites in this category are games like The Resistance and Space Alert. While I haven’t played the latter in Chinese (it’s a little bit too complicated to play with non-gamers), I imagine it must be a serious test of speaking ability, considering that it’s hard to play in one’s native language! Diplomacy would also be awesome to play in Chinese.

Telling stories is something that most people enjoy in one way or another and there are many games that make this easier by providing scaffolding, limitations and inspiration. If you haven’t already, you should check out games like Once Upon a Time and StoryCubes.

I have actually co-authored a game which fits perfectly in this category and would be super for more advanced language practice (and for fun in your native language). It’s called Nostalgia and is about a group of retired heroes bragging and boasting about past adventures to impress their grandchildren. The problem is that nobody really remembers what happened, so it”s all about inventing things to make yourself look good. More information about the game will be available here when it’s published (no idea when, though).

I’ve been playing and writing tabletop role-playing games since I was ten, and even though I don’t devote much time to the hobby nowadays, it’s still dear to me. I believe that role-playing games have huge potential for language learning.

The reason is that they put you into situations you would normally not be in, which opens doors to setting and scenarios you really need to be able to handle, but which you’re unlikely to encounter, especially if you don’t live in China. I have written more about this here:

Role-playing as a way to expand your Chinese

The easiest way to do this is to create well-defined scenarios, perhaps with some rudimentary rules (although this is optional). Create roles with different motives and personalities, give them a setting where they interact and see what happens!

If you want to stay close to language you might actually need, keep to situations that might actually arise in real life; if you want to have fun as well, play anything you want. This includes actual tabletop role-playing games, although that’s something which is exceedingly hard to play well in a foreign language.

5. Playing digital games with Chinese in them

Playing computer or video games in Chinese is a great way of learning. Although it naturally differs from game to game, those that include spoken and/or written Chinese work very well provided that they are roughly on the right level or if they are very repetitive.

For example, real-time strategy games like StarCraft 2 might be too hard for most students of Chinese, especially if we’re talking about the storyline and cut scenes, but game play itself is fine. Units say the same thing over and over, and even if 整装待发 (整裝待發) is probably not the first expression you learn, you will know this phrase if you play the game (marines say it when they move out, so you’ll hear it hundreds of times).

The story and cut scenes in these games are like interactive short films, so they are usually at a similar difficulty (quite hard, in other words). However, you can usually re-watch them many times and if you enjoy the game, you are really motivated to understand what’s going on. Many games also have subtitles you can turn on.

6. Speaking in Chinese while playing games

Any game can lead to learning opportunities if you play them in Chinese. It could be a single-player video game, a normal card game or anything; the important thing is that the conversation that surrounds the game is in Chinese, regardless if the game itself relies on conversation or not. I wrote a general article about boardgames in Chinese, which overlaps several of the categories here, but is perhaps best suited to this one:

7. Discussing or learning about games in Chinese

If you’re interested in games, you should try to convert parts of your hobby to Chinese. This could involve finding websites, blogs or forums that discuss your favourite game, finding live commentary of matches in your favourite computer game or introducing a board game you like to a Chinese friend (in Chinese, of course). Using Chinese to describe how to play a game you enjoy is both challenging and fun!

8. Playing games where comprehension is essential

As should be very clear by now, I really like using games for a learning and teaching. Therefore, I have created an interactive text game together with Kevin over at WordSwing. It’s called Escape and you can read more about it here:

In essence, it’s an interactive text game where you choose your actions based on what you read and the story develops differently depending on what you choose (and if you choose badly, you lose). See also:

Some games are an integral part of the culture, so if you play them, you don’t only get the opportunity to speak more Chinese while having fun, you also learn about the culture! I have written one article about playing  麻將 (Mahjong), but you could also play games like 象棋 (Chinese chess) or 围棋 (Go). Read more here:

Finally, anything can be turned into a game by including elements from games into other activities. This is usually called “gamification” and has been something of a buzz word for some time now. To be honest, I’m a bit sceptical to the idea of artificially and superficial copying certain elements form computer games to language learning (such as badges, quests or similar).

However, I still think this area has potential in general, especially when it comes to increasing motivation and visualising progress, something modern video games are exceedingly good at, but which traditional formal education is really bad at. Gamification, if done right, can be really effective. This is a separate topic, though, so I will save it for another time! In the meantime, Wikipedia has a decent article about gamification.

Games make learner more active, encourage them to use the language, and put focus back on communication where it should mostly be, and most importantly, games are fun. I always try to include small games in my language learning and teaching, and I think you should, too!