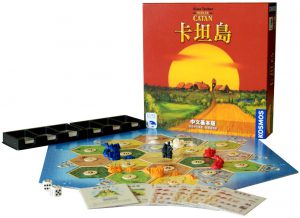 Playing games is a powerful way of learning a language and it’s something I’ve used to learn Chinese a lot. I’ve written several articles about this already, including how to use computer games to learn Chinese (and a separate article about StarCraft), as well as an article about word games. More recently, I have also designed a text adventure game for learning Chinese which is more specifically targeted at second language learners.

In this week’s article, I’d like to bring up another kind of game I think has huge potential for language learning: board games. While I have written about Mahjong 麻將 (májiàng) before, in this article I will talk about playing board games for language learning in general, even if the games themselves are not related to Chinese.

Why board games are suitable for language learning

Board games are suitable for language learning for a number of reasons. Naturally, all don’t apply to all games, but by choosing the game carefully, you can get the right mix of features you’re after:

Which board games to play

Naturally, your experience will be different depending on what game you play. The most important factor as a second language learner (apart from if you think the game is fun of course) is how important language itself is in the game.

Some games involve little or no language. For example, you can play a game of chess without saying anything apart from “check” (将军). In other games, language is a crucial part of the game.

The classic board game Diplomacy (外交) is a good example where the whole game is about talking with other players, forging alliances and planning how to backstab your friends. Naturally, this type of game requires advanced levels of Chinese, whereas chess can be played without knowing a single word. This is not meaningless if you like chess, there’s plenty to talk about, it’s just not a requirement to play the game.

For a much more in-depth discussion about games and learning (or teaching) Chinese, check this article:

You need a source of proper language to play

When you play a game in Chinese, you need a good source for vocabulary and sometimes grammar. This will be different from game to game, so it’s hard to compile a general list of useful words.

If you have a native speaker around, that’s of course ideal, but even if you don’t, you can still play because the rulebook is a very good source of vocabulary. I suggest that you start with a game you already know how to play in your native language, then read the Chinese rules (should be possible to find online if it’s a relatively popular game, or you can buy something locally) and extract all the language you need from there. You will internalize the vocabulary, sentence patterns and so on by playing the game.

Here are the rules for Settlers of Catan:

Video about playing board games in Chinese

Skritter has produced an awesome video based on this article. You can check it out here:

I have played a number of games in Chinese and explained many more (because I’ve introduced them to Chinese-speaking exchange students in Sweden). This has been great fun and also a great way to learn and reinforce vocabulary and grammar.

Have you played any board game in Chinese? How did it go? Have you introduced any of your favourite games to your Chinese-speaking friends? Give it a try!