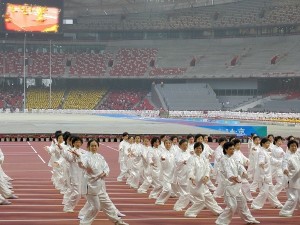 While living in Taiwan, I had the opportunity to practise several sports mostly using Chinese to communicate with instructors and fellow practitioners. Doing so made me realise that there is huge potential for language learning in practising sports.

The obvious advantages include an increased vocabulary about the specific activity, but as we shall see, I believe sports and similar activities are really good for more reasons, mostly social and psychological.

Since it’s quite good to practise some kind of sport anyway, this shouldn’t take up much extra time. Combining two activities you’re already performing is one of the best ways of increasing efficiency.

I’ve practised various sports which were all taught and/or practised in Chinese: Tai Chi (太极拳), diving, yoga and football. Apart from these, I have also had PE class for one semester, which included everything from badminton and volleyball to jogging and table tennis. From these experiences, I’ve learnt a couple of things I’d like to share with you. Have you practised any sports yourself? Leave a comment and share with us!

Arriving in a new country, most people find it somewhat difficult to start interacting with natives without having any reason to do so apart from the urge/need to learn the language. Practising some kind of sport is an excellent way of circumventing this problem and making communication very real immediately. Not only will it be real, the kind of communication you’ll have will most likely also include some direct feedback. If the instructor tells you something and you don’t get it, the instruction might be followed by another one, possible with some helpful gestures.

Depending on what you practise, you can learn a lot. For example, when I practised diving (which I did consistently for one semester), I had a very good coach who not only managed to improve my diving a lot, but he also taught me much about how to describe motion, movements and the human body. He would tell me what I should change in my dives, show me as best as he could and then give me feedback on whether I improved or not. This communication was real and felt important at the time.

I think there are two different ways of practising sports (providing you do it in a social setting and not on your own). First, you can join some kind of club at a nearby university (might be easier if you actually study there), in which case you will get to know quite a lot of native students. The point is that these people aren’t there primarily to meet you, so the kind of interaction you will have with these natives are quite different from language exchange partners or other people you meet because of some mutual interest in each other. In my experience, most people I’ve met in this way have been very positive towards me as a foreigner, but you might meet people who just think you’re a stupid foreigner. Don’t despair, this might be very good! Always interacting with people who do everything they can to understand what you say is one thing, but talking with people who don’t particularly want to listen to you broken Chinese is quite a challenge.

Second, you can find some way of practising which is not linked to any school or university. I practised yoga this way (although not for very long). This has the additional benefit of bringing you into contact with people who aren’t students and might not interact with foreigners at all in their daily lives. Again, they’re not there mainly to talk to you, so the kind of practise you get will not be the same as with a teacher or classmate.

If you’re the kind of person who can sit down and chat with random strangers in the park, then I don’t think you’ll find this very helpful, but I’m not like that personally and I think at least some readers are like me. If you share a common interest with someone, it’s a lot easier to get a conversation going. Regardless of how limited your ability might be, you still have something you really want to communicate. A common ground to build from is an excellent start.

You don’t have time? Really?

As I said in the beginning, the question of if you have time or not depends much more on being flexible than actually not having time. It’s about being smart and diversifying your learning. Most people I know either already practise some sport or have the ambition to do so. Why not combine this with your language learning? I realised that your favourite sport might not be available where you live (I was very lucky indeed to be able to practise diving) or your favourite sport might not be very social, but in these cases, you might have to make some sacrifices.

Perhaps you can practise something you like, even though you would’ve preferred something else if it available. Likewise, if you’re so busy that you don’t practise anything at all, you might consider sacrificing something to get that extra one or two hours each week. This is a matter of prioritising and something you’ll have to do on your own.

I suggest that you around and see what activities you can find. If you find something which looks interesting, why don’t you try it out? In case you’re already practising sports in Chinese (or have done so), I’d be delighted to read about your experience, so please leave a comment before you go.