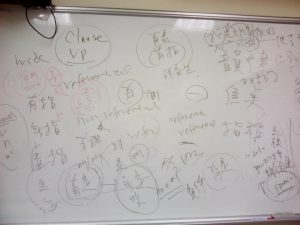 Learning about Chinese grammar in Chinese in grad school. In spite of the messy whiteboard, this course was actually very interesting.

Learning Chinese as an adult is very different from learning it as a child. While there are many things to learn from how children learn languages, that’s never a reliable guide for how adults should learn; the learning conditions are simply too different. Some people say “native speakers learn that way”, but this is by no means a guarantee that it will work the adult saying it.

The role of implicit and explicit knowledge is one of the main areas where child and adult language learning are different  Most of the knowledge we have about our native language is implicit, meaning that we get it right without being aware of how or why.

Spoken language comes to children as naturally as walking or eating, but this isn’t as true for adult Chinese learners. Or at least the process takes a lot longer and there are many obstacles in the way.

In order to avoid this problem, foreign language learning and teaching typically contain at least some explicit instruction about the language, i.e. describing how grammar, vocabulary, pronunciation and so on work, usually in the student’s native language.

How do we acquire implicit knowledge?

I’m not going to go into details when it comes to first language acquisition here, whether language is something innate or not, and how we come to learn our first language so well, but I will discuss this from a second language learning perspective. How do we acquire implicit knowledge about the language we’re studying? If we’r not being told about it, how can we learn it?

Through exposure and comprehensible input.

I’ve learnt English and Chinese to advanced levels, and I think the only way of acquiring implicit knowledge, or a feel for the language (语感/語感 in Chinese), is to spend an awful lot of time on listening and reading.

I have spent tens of thousands of hours listening to and reading English, which has given me the ability to speak and write on a near-native level. Most of this has been through semi-immersion at home; I have never lived in an English-speaking country.

The problem is that most people who learn a foreign language don’t have tens of thousands of hours to spend, and even if they did, they wouldn’t be able to motivate themselves to use them for language learning. What to do?

Using explicit learning and teaching as a shortcut

This is where explicit instruction can play a valuable role. While you can arrive at a rule for how something in a language works just by being exposed to it enough, this can sometimes be very difficult or time-consuming. If someone else tells you the rule and you have that in mind when you then exposed yourself to the language, it will be easier.

Let’s look at a few examples where explicit knowledge can help us learn something which would otherwise cause confusion and take more time to learn. These are just examples, of course, there are many, many more:

There are of course many more examples, some where only a push in the right direction can be immensely helpful and stop you from wandering down the wrong path. Telling students that the particle 了 doesn’t represent past tense can save much confusion and frustration.

You need both implicit and explicit learning

As is often the case, the extreme versions are to be avoided, but it’s not the case that they are equally bad. Never learning anything explicitly is a lot better than always learning everything explicitly, which is surprisingly common in language classrooms around the world, where foreign languages are often described more than used.

Note that the problems with explicit learning don’t really go away entirely just because you use Chinese only. If you’re not advanced enough, using Chinese only introduces stress and uncertainty. If your Chinese is advanced enough, there are still many things that are incredibly hard to explain and that are best learnt through exposure. Capturing the way native speakers use their language in rules and descriptions is sometimes very hard and can seldom be done completely.

Trying to understand everything you encounter as a second language learner is also a waste of time. I wrote more about this problem in The Cthulhu bubble and studying Chinese.

Conclusion: Learn Chinese implicitly through exposure with a seasoning of explicit instruction

My conclusion is that the best way to learn Chinese is to use mostly implicit learning, i.e. learning directly from exposure to the language without having someone telling you how everything works. Most of the basic rules you will figure out for yourself along the way.

However, explicit instruction can be very useful. Some rules and patterns are difficult to get at through mere exposure, and others might cause confusion for other reasons. In these cases, explicit learning is good. It’s also useful when a student gets stuck or when teacher time is limited. You can listen and read on your own and chat with native speakers online or on the streets, but only a competent teacher can explain how things work.

The main problem as I see it is when most of your time is spent learning about the language and how it works, rather than engaging with the language directly. You need to do both for optimal learning, but the emphasis should be clearly on the latter.