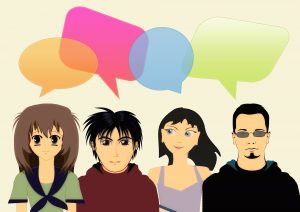 A language exchange is simply two people who want to learn each others’ languages. Sometimes, people say that it’s more a matter of body language exchange (i.e. a way of finding a boyfriend or girlfriend), but even though this might be true to a certain extent, that’s not what I’m going to talk about today.

Instead, the imagined situation is that you find someone to help you with your Chinese, who is also interested in learning your language, so you can have a fruitful exchange.

Why it’s good to have language exchanges

Language exchanges are sometimes frowned upon, especially by the extrovert and socially adept kind of people who can make five new friends in as many minutes in any kind of social situation. Isn’t this kind of formal language relationship weird? Isn’t it unnatural? Isn’t it unnecessary?

My answer to all those questions is no. The point is that there is a big difference between a language exchange and a normal friendship. This is not something good or bad, it’s just distinctly different in some ways:

I’m not trying to convince you that a language exchange partner is better than a friend, but I am saying that these two are completely different! You can do most of the above-mentioned thing with some friends, but not all. I think it’s very important to treat your Chinese-speaking friends with respect and as you treat your other friends. Starting a language exchange gives you a valid reason to focus on Chinese without destroying a social relationship.

Don’t forget that you can have a language exchange with your friends as well. Simply separating social time and study time is a useful tool if you don’t want to focus on improving your Chinese every time you open your mouth.

Beware of the difference among native speakers

You should know that native speakers differ very much in their language ability. They also speak different kinds of Mandarin depending on where in China they’re from. All of them are of course very good at the language they are using, but you should be aware that perhaps this isn’t what you’re trying to learn. For instance, a minority of the people in China have a clear, standard pronunciation in Mandarin, so if that’s what you’re after, you need to select teachers carefully. Likewise, if you aim to learn formally correct Chinese, you can’t pick the guy in the supermarket who dropped out of high-school, because he will have no clue about the advanced academic Chinese you’re reading. This is obvious, but still difficult to feel as a learner.

To illustrate what I mean, think of all the people you know who speak the same language as you do, including former classmates, co-workers, neighbours and relatives. If you had a foreign friend who wanted to learn your language, would you trust every single one of these people to be able to teach this foreigner and do a good job? I dearly hope the answer is “no”. Separating the wheat from the chaff might take a few attempts and be tricky, but you have to do it. Note that I’m talking about language exchange here, not choosing friends! There are many reasons for wanting to talk to someone which are completely unrelated to language.

Of course, it’s of paramount importance to know what you want to achieve with your language exchange. If you want to practice speaking and listening in natural situations, any native speaker will do (perhaps you should try to make friends rather than find language exchange partners, though). If you want to have someone correct your word usage or pronunciation in conversations, anyone who keeps pointing out mistakes is a good choice.