Feedback is an integral part of learning a foreign language and there is no doubt that we need it to improve. While it’s certainly possible to learn a lot with simply a lot of exposure to the language, both when it comes to spoken and written language, it’s very hard to increase accuracy in speaking and writing without feedback. 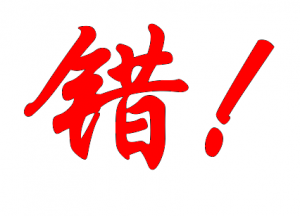 As adult learners of Chinese, we have experience with at least one other language and that means that we constantly make assumptions about how Chinese works which might be incorrect. We need feedback from other people to correct these problems. This is perhaps most obvious when it comes to pronunciation (it might sound good to you, but not to a native ear), but it’s also true for speaking in general as well as writing.

However, giving good feedback is not easy and it’s perhaps even harder to receive feedback it well. I have already written about the art of being corrected, so now it’s time to write about the other end of the exchange and discuss how to give feedback. This article isn’t meant for teachers only, though, because as a learner you can use these ideas to increase the quality of feedback you receive from your language exchanges, class teachers or private tutors. The quality of the feedback can be improved tremendously by following a few easy principles, but let’s look a little bit closer at the problem first.

When I was an upper-intermediate learner, I took a course in written Chinese that was awful in many regards, but the worst part of the entire course was the feedback we received from our teacher. I usually spent more time trying to understand what I had done wrong than I spent writing the essay in the first place.

Now, if this time was well spent trying to figure out good ways of expressing myself in Chinese, fine, but I actually didn’t understand what I was doing wrong at all or why the teacher wanted me to change something, so I ended up giving the essay to other native speakers for feedback. They sometimes didn’t understand either, but they still managed to help me improve the essay.

The reason the feedback was so bad was that the teacher didn’t use a sensible notation system. If something was wrong, she underlined it with a red pen and that was it. That meant that the only thing you knew when you saw that read line was that something in that sentence was wrong. Syntax? Vocabulary? Collocations? Logic? Something else? Does the sentence just sound a little bit strange or was it completely wrong? I didn’t even know where to start.

Misunderstanding feedback is catastrophic, because it might lead to the unlearning something which is actually right, while ignoring the actual problem. For instance, I might think that the teacher don’t approve of the verb-noun choice in the sentence, and then make a mental note not to write that again, whereas it is in fact the word order of the sentence that is wrong, which I might fail to notice entirely.

One very common problem is not indicating if the sentence in question is just plain wrong or of it just isn’t very idiomatic in Chinese. This matters because if you (incorrectly) think that what you wrote is totally wrong, this might screw up your mental representations of Chinese grammar and syntax. If it were clear from the feedback that you sentence is actually quite good, albeit rarely used by native speakers, your confidence for grammar and syntax might actually be reinforced by the correction.

Some guidelines to use for more useful feedback

Instead of complaining about bad teachers I’ve had, I’m going to share with you some easy steps to take to improve the feedback you give (if you’re a teacher) or that you can try to persuade your teacher to use (if you’re a student):

Naturally, I have only given examples here. It doesn’t really matter exactly what method the teacher uses to let the student understand where the mistakes are and what to do about them, as long as the student can understand without spending hours and needing to consult other native speakers. Colours are perhaps most suitable for digital correction, but special symbols or coloured pens should do the trick on paper.

When reading your essay, the teacher might understand very well what you have done wrong and might know how to help you. It’s a pity if that potential help got lost on the way because of bad standards for giving feedback. If you follow the guidelines in this article, the quality of the feedback will increase, and, as a result, the amount of Chinese being taught or learnt will increase as well!