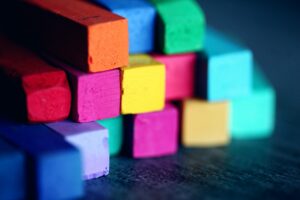 Language learning can be divided into two major “directions”: bottom-up and top-down. Bottom-up learning means that you focus on the parts, then learn to combine these parts to access larger units. Top-down is the opposite, where you look at the whole first and then break it down into smaller pieces in order to understand it.

If we adopt the first approach, we learn each component of a character or each part of a sentence before we combine these into larger, meaningful wholes. If we adopt the second approach, we go for the meaning of the sentence or the character first and only try to see how the different parts contribute to this meaning later.

I’m a big fan of top-down learning because it’s very hard to learn things that have no context, so by focusing on the bigger picture first, we create a framework that we can then use to fix new information in our minds.

At some point, though, you need to understand the smaller units as well. You can just learn chunks when you’re a beginner, but in order to really understand grammar, tone changes and learn thousands of characters, you have to start looking at building blocks.

In other words, we need a mix of top-down and bottom-up learning. The question is how to mix the two.

Is it good to learn character components from a list?

Also, the amount is limited, I’m not asking you to learn 1000 building blocks before you can do anything useful, I’m asking you to learn 100 simple characters that you have probably already seen numerous times if you’ve made it through a few chapters in a beginner textbook. However,  you should never feel that you have to learn more components to learn characters or more words to read or create sentences in Chinese.

If you’re an ambitious student who want to learn as much as possible as quickly as possible, there is definitely a real risk of focusing too much on building blocks. The problem with this is that you risk losing site of the real goal: Learning Chinese.

The most important carriers of information in Chinese are words and these typically contain two characters, combined in a way that is seldom obvious. If we return to the house metaphor again, you want to live in a house, not a brick yard. If you want to build a house, you need lots of bricks, but the bricks themselves aren’t the point, they only become useful when you incorporate them into a larger structure.

Advantages with focusing on building blocks 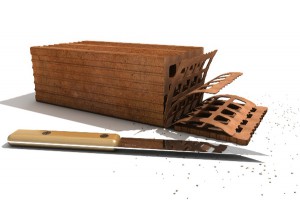 The most obvious advantage with focusing on building blocks is that it gives you access to meaning later. It means that with some important building blocks, you stand a better chance of being able to make sense of larger units of Chinese without being told what they mean by your textbook or teacher. Learning a bunch of random strokes is very hard, but once they acquire meaning in the shape of character components, it isn’t all that bad.

Furthermore, learning the building blocks helps you understand the way Chinese is structured. The most obvious example of this would be phonetic components. If you have no clue what the parts of a character mean and how they are pronounced, the hidden information about how the character is pronounced would be completely lost on you.

Which building blocks do you need?

It seems obvious from the above reasoning that you should avoid the extremes of either neglecting building blocks at all or breaking everything down to the smallest component. The first means that you’re just copying without understanding, the second means that you’re not really learning anything useful. Something in between works well.

This generates the next question: How do you know which building blocks you should focus on?

In essence, my way of learning Chinese is mainly top-down, meaning that almost everything I learn is based on an attempt to understand something bigger. The words and characters I learn typically come from a specific context and I have added them because the seem to be important in that context.

Exactly where you choose to place yourself on the spectrum depends on how long-term your learning is. If you want to be able to use what you know quickly, focus less on building blocks and more on larger chunks. If you want to accelerate your learning in the long run, focus more on building blocks and make long-term investments that will pay off eventually.