For most people, Wikipedia is just an encyclopedia similar to other encyclopedias except that it covers more content and is perceived as less trustworthy. When it comes to learning Chinese, it should be obvious that it can be used to practise reading, just like you can read and learn from any other collection of texts.

Wikipedia is more useful than that, however. In fact, I use Wikipedia as often as I use ordinary dictionaries to look up words and terms in Chinese. Why is that? What does Wikipedia offer that dictionaries do not? And are there any other benefits of using Wikipedia to learn Chinese? 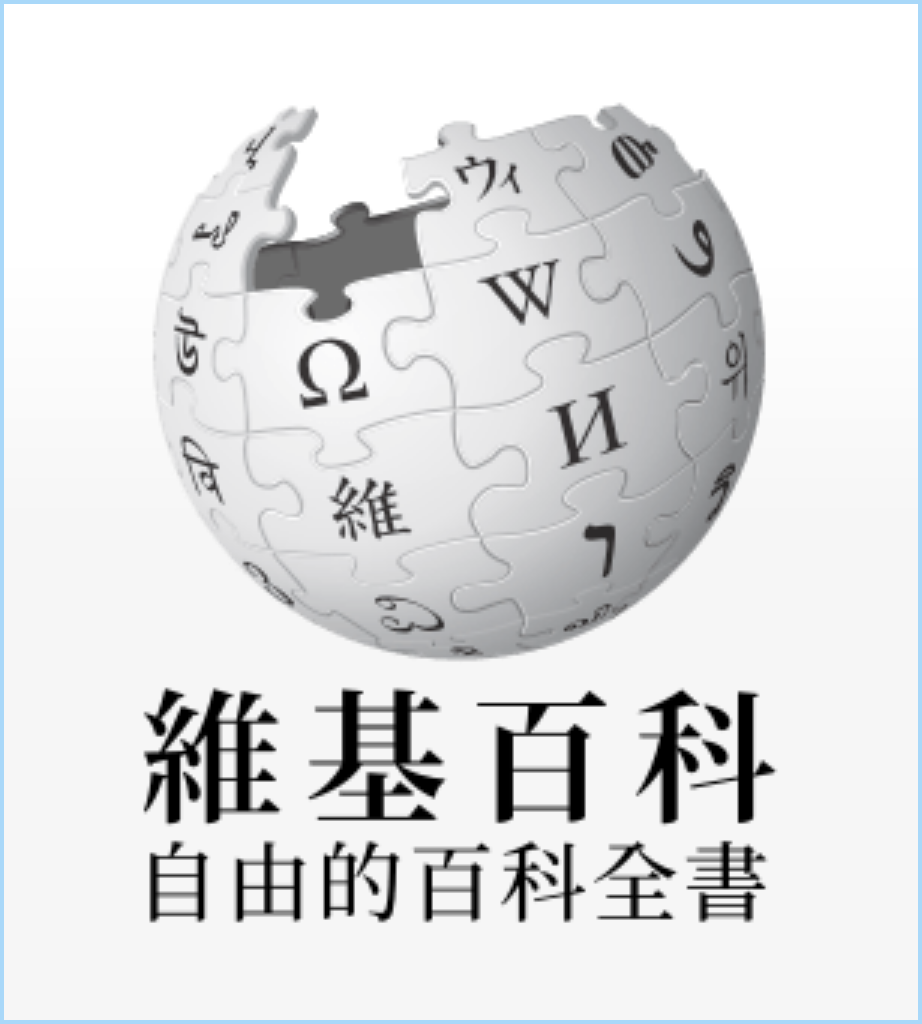 Like I said in the introduction, it should be obvious that Wikipedia is superior to a dictionary when it comes to things like practising reading ability, but let’s look at a few cases where Wikipedia beats dictionaries on their home turf: looking up words. Wikipedia can be superior mainly because of two factors:

Naturally, if your goal is to look up the basic definition of a word like 桌子 or see what Chinese people call an everyday object like “table”, you’re better off using a normal dictionary. It will provide you with additional information about pronunciation and usage that is essential for basic words.

Why do I use Wikipedia as often as I use dictionaries to look up words?

Because communicating in a language is about so much more than basic words! Conversations are not limited to topics you can find in a dictionary, indeed it might be that few things you want to talk about with people could be found in a dictionary. Most of these topics for conversations can be found on Wikipedia, however, and to figure out how it’s said in another language, just switch to that language!

Let’s look at a few examples:

Wikipedia is more than a dictionary

So far, we’ve looked at using Wikipedia like a dictionary and seen that it can sometimes be superior, but of course, there are more ways you can use it to learn Chinese. It is, after all, an encyclopedia. It has brief introductions and often in-depth explanations of topics, along with myriads of pictures and other multimedia content to help you out.

This is not unique to Wikipedia, so you’ll find the same benefits in Chinese-only encyclopedias such as 百度百科 that I recommended for reading practice in my article The 10 best free Chinese reading resources for beginner, intermediate and advanced learners.

Hyperlinked encyclopedias are great for learning because it’s so easy to find more information if you need it. This can be particularly useful in a number of situations, such as if you’re about to dive into an entirely new area of the Chinese language. A good place to start is to read encyclopedia entries for key topics in this new area, which will guarantee that you see the relevant vocabulary over and over again, along with links to related topics you might also need to read up on to make sense of it all. Reading such overviews and summaries can be great as preparation for reading longer or more in-depth texts.

And remember, you usually have access to the article in other languages if you want to check something. These are not parallel texts, of course, but they do usually contain fairly similar content.

A few notes on Chinese Wikipedia

There are a few things about Chinese Wikipedia in particular that are good to keep in mind when you use it. For example, back in the old days, there were essentially two separate Chinese sites, one written in simplified Chinese and one in traditional Chinese. In 2005, this changed and there is now just one Chinese Wikipedia provided with a number of different conversions of both individual characters and words. You can select which settings you prefer at the top of the page, but some of what you see will be automatic conversions. These are pretty good, but not perfect.

If you’re not sure about what simplified and traditional characters are about, I suggest you check this article out before continuing: 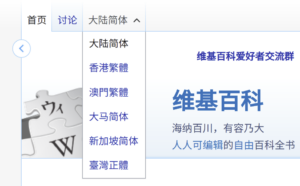 Please note that conversions are not only done on the character level, but that appropriate, region-specific vocabulary is also chosen. For example, when it comes to computer vocabulary, there are many differences between Mainland and Taiwan standard (鼠标 vs. 滑鼠 for a computer mouse, for example) and these are also converted. If you check the article about computers and switch between Mainland and Taiwan locales, you’ll see that the content is the same, but some of the words change.

In some cases, such as the one above, the title itself is different. In these cases, you can see that there is a symbol next to the conversion button, which says 汉/漢 and when clicked reveals what’s going on with conversions. It also shows you if the title is converted by hand or if it’s probable that some automatic conversion is involved.

For many entries, there’s also separate information about each region, so if you look at the entry about computers, you’ll see the information displayed in the picture on the right, detailing what words are used where.

As you can tell, conversions on both the character and word level can get rather messy if you want to really understand what’s going on, so you can at least get some idea by the available information. Sometimes, this is quite useful, such as for the entry for “Eurasian coot” that we discussed earlier. It will actually tell you which words are preferred in each locale, even if that information is not in the article itself.

Another thing I think most people already know is that Wikipedia is blocked on the mainland, which includes the Chinese version of the site. Since entries are edited by users, there’s also the usual problems with controversial articles about sensitive topics. In this article, my goal is to show you how to use Wikipedia to learn Chinese, though, and as long as you have access to the site, this works just fine. 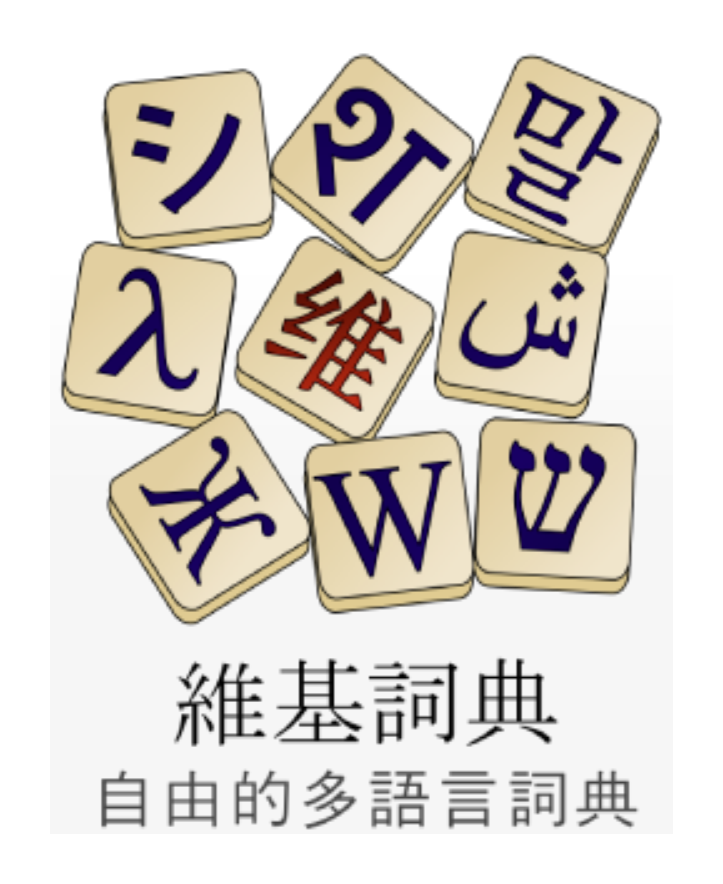 While we’re on the topic of Wikimedia sites, it’s worth noting that Wiktionary can sometimes be extremely useful for learning Chinese, much more so than a standard dictionary. Languages work like they do on Wikipedia, so if you look up information about “coot”, it will show you information about words spelt like that in any language (in this case English, Middle English and Scots). If you switch to Chinese, it will show you that information in Chinese, along with a list of translations to Chinese.

Normally, this functions much like a dictionary, but in some cases, there are incredibly useful comparisons. For example, have you ever been confused about how to say “spoon” in Chinese? If you haven’t, you will sooner or later! Here’s what the first half of the Wiktionary table looks like on the page for 勺子: 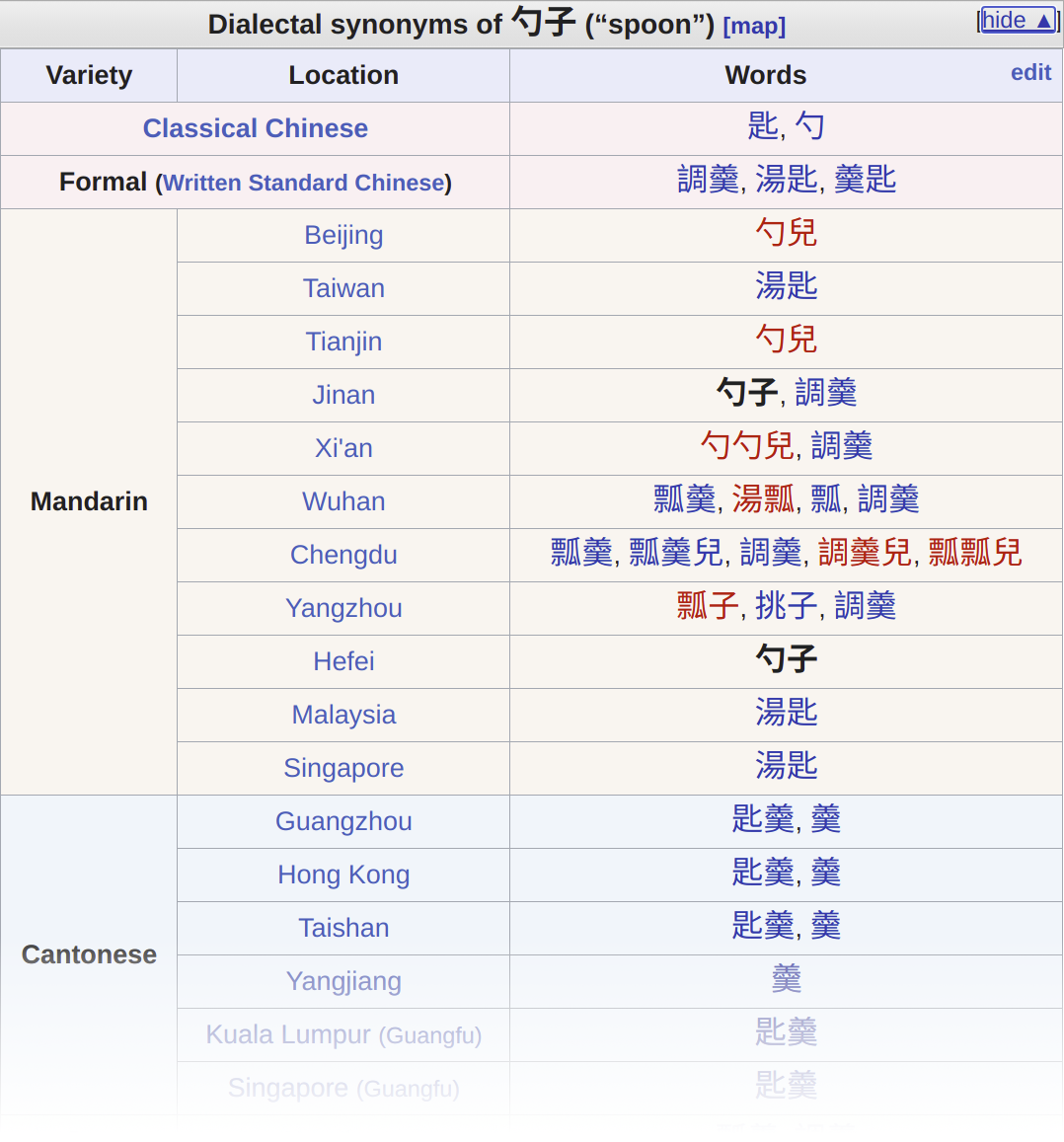 There are probably more ways to use Wikipedia to learn Chinese than those I’ve listed here, so if you know of a useful method, why not share it in a comment below? Like I said, I use Wikipedia a lot for Chinese, but I bet there are potential benefits I haven’t thought about!