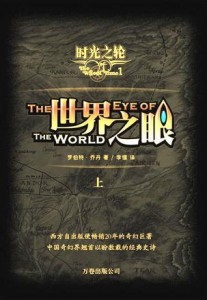 I don’t know about you, but I know started reading novels in Chinese way too late. This was partly because I thought it was scary and more difficult than it actually was, but also because I lacked a good approach and a strategy to overcome the difficulties reading native material implies.

Looking back at how I learnt English, it strikes me that there is a powerful way of getting used to reading novels in a foreign language, namely to reread something you have already read before and like a lot, but now you read in the target language.

We have perhaps left the times when comprehensible input was a buzzword, but it’s still a powerful concept when talking about listening and reading. Simply put, it means that you benefit most when you understand most of what you read or listen to, which will enable you both to solidify what you already know, but also to easily learn the few things you didn’t know. Please read this article for more about comprehension-based learning and teaching.

However, if you’re aiming for near-perfect understanding of a written text before you attempt to read it, the likelihood is that you will never get to a stage where you can read a novel. Understanding almost everything is not a requirement for learning or enjoyment, of course, it’s just the more you understand, the more these are boosted. Fortunately, there are many things you can do to scaffold your learning and make the text easier.

As independent language learners, though, we can’t really make use of some common methods such as creating word lists, creating interesting preparation tasks, substituting difficult words for easier ones and so on, because they typically require a teacher. However, one very effective way of reducing the difficulty of a text in Chinese is to be already familiar with it before you start.

Not ready for a novel yet?

The method described in this article works for all lengths of texts. You can read a short news article in English first and then read the same article in Chinese. Another place to check out is the Marco Polo Project, where enthusiasts translate articles from Chinese into various languages (mostly English).

I started learning novels in English with Robert Jordan’s The Wheel of Time fantasy series. This was when I was twelve and realised that it took ages for the translator to translate new books into Swedish; I simply didn’t want to wait that long. I had read a few books and wanted more, but rather than wait a year or so, I decided to read the series in English. To reduce the shock, I decided to read from the beginning, including the books I had already read in Swedish.

This turned out to be a very good idea indeed. Reading a few books in English covering what I had just read in Swedish was a really good way of scaffolding my English reading, making it a viable project even though my English wasn’t up to the task at the time. The fact that it then took the author fifteen years to finish the series (or, rather, for him to die so someone else could finish it for him) isn’t my fault.

Why is it a good idea to read the Chinese translation of a book you have read and like in English?

Thus, reading your first novel in Chinese turns from impossible to merely difficult. It will take hard work to get through (depending on your current level, of course), but it’s definitely easier to do it this way than choosing random book your Chinese friend recommends to you.

A few words about the language in translated novels

You should be aware that some translations aren’t very good (in fact, some are terribly bad). I don’t mean that they are bad in the sense that the translator fails to capture the soul of the original novel and used another language to express it expertly, instead I mean that the Chinese in the translation is not good. This is probably because the translator was paid too little and just rushed through, translating sentence by sentence, sometimes even word by word. Therefore, when reading some translated novels, you can feel the English behind the sentences.

Obviously, this is bad for us as readers, especially if we want to learn Chinese along the way. That translated novels will not sound exactly like first language novels is only natural, and I don’t think that’s a problem, but at least the language should be natural and correct.

The best way of checking this as an intermediate learner is to simply ask a native speaker, preferably one who reads a lot, and see what they think. Remember, you’re not really interested in the quality of the translation; what you want to know is if the Chinese is good or not, so just let them read a few pages and ask what they think about this as potential reading material. If you buy books online, there are usually previews available you can use for this.

Also, note that reading your first novel in Chinese is about reading practise. It’s about understanding words, piecing them together into sentences and get the general idea of what’s going on. This is not the time for memorising sentence patterns and detailed studying of syntax.

What novel to choose

This might be obvious, but choose a novel that is interesting for what happens or because who’s in it rather than because the way it’s written. Action, mystery, adventure and fantasy stories are all very good.

In order to close the circle,I’m now rereading The Wheel of Time in Chinese. Naturally, it isn’t my first novel in Chinese, but it’s still interesting to return to a series I never finished as a teenager, now in a new language. I don’t think Robert Jordan is a great writer in general, but I am interested in the plot. The curiosity over how the series ends keeps me motivated to read the next page. It remains to be seen if it keeps me motivated through ten thousand pages, but it’s worked well so far!