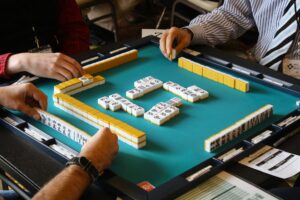 Why learn Chinese by playing Mahjong (麻将, májiàng)? Because it’s both fun and effective!

One of the most important pieces of advice I give beginner students of Chinese is that they should learn by doing. This can be difficult when you only know a few words, but there are lots of things in your life you can convert to Chinese after just one week of studying.

The most obvious example is counting. Don’t just study the numbers and learn them for the test, count in Chinese whenever you get the chance! Use 三 (sān, “3”) eggs for your pancakes, do (十二 (shíèr,” 12″) push ups, or count 三十六 (sānshíliù, “36”) steps up to your apartment.

Or you can play games like Mahjong, where you use the numbers all the time! 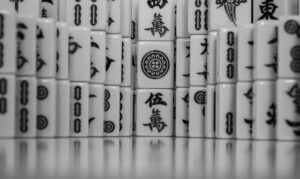 Mahjong is extremely popular throughout the Chinese-speaking world and beyond. It can also be a gateway to Chinese culture, both as it appears in the game and the people you get to know by playing the game. Native speakers are usually impressed when foreigners know how to play their games, which is not limited to Mahjong, but is true for other classic Chinese board games like 象棋 (xiàngqí, “Chinese chess”, not to be confused with Chinese checkers) and 圍棋 (wèiqí, “Go”).

Apart from the numbers 1-9, you only need a handful of words and most of them are useful outside the game as well. I have played in Chinese with people who don’t even study Chinese, so it’s definitely doable for zero beginners. From a language point of view, playing mostly consists of naming the tiles you play and, sometimes calling an action based on what someone else just played. Naturally, Chinese people tend to talk a lot while playing the game, but we’ll focus on the game itself here.

How to play Mahjong in Chinese

The easiest way to get the hang of the rules of Mahjong is to think of it as a card game (which it originally was). The game is played by drawing one new tile to your hand each round, then discarding one. Gradually, you upgrade the tiles you have on your hand until all tiles are part of different sets of three or four of the same tile or three tiles with consecutive numbers (a straight). The first person to combine all his or her tiles in this way wins.

There are many different ways to play the game depending on where you are. Some of thees variations have a huge impact on how the game is played, but others are mostly cosmetic. Since we are interested in learning Chinese here, rather than winning competitions, I will not discuss specific rule sets and variants. Still, unless you have played the game a lot within a certain community, you need to check how they play the game, even if you think you know how it works. There are also many rules that have no impact at all, but that are important to many players, such as exactly how to setup the game, how to determine who goes first, and so on. Let your Chinese friends deal with this, or if you play with other foreigners, do whatever you like.

If you want a beginner-friendly introduction of how to play, check this video on YouTube (in English). You can also check the Mahjong Competitions Rules (MCR) on Wikipedia. 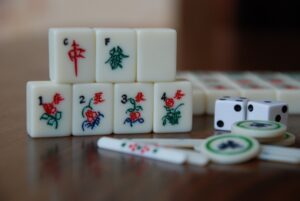 I have played Mahjong a lot with different native speakers, and even though the basic premise of the game stays mostly the same, the scoring system can be completely different. If you care about games and want to play well (I do), this is frustrating, because changing the scoring system changes the way the game ought to be played. Also note that many native speakers put real money on the line when playing, but unlike in most variants of Poker, this is not an integral part of the game, so playing for points or valueless tokens is fine.

For some reason, there was a Mahjong craze in Sweden in the 80’s, so I actually learnt to play the game as a child. The scoring system we used was unnecessarily complicated, and I never really understood why. Later, when playing with native speakers, it turned out that most used a system that both easier and better! 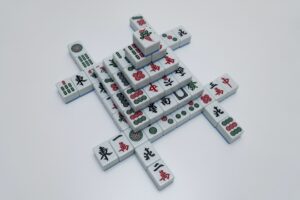 There are many solitaire games that use the Mahjong tiles, but these have nothing to do with the game I’m talking about here. These games are normally about matching tiles arranged in various patterns with the end-goal of removing all the tiles. There are also games for several players where tiles are played face-up much like when playing Dominoes, but again, this is not real Mahjong.

While these variants of Mahjong can be fun, they offer little or nothing for us language learners, so I have omitted them from this article. I thought I’d mention that they exist, though, to avoid confusion. You can still play real Mahjong on your own against AI opponents, of course, but more about that later!

Learn Chinese by playing Mahjong with these word lists

Below, I have included the basic vocabulary you need to play. There are more useful words than these, and there are also variants of some of them, but this is just meant to get you started, not teach you everything there is to know. There are also regional variants, so don’t be surprised if this list isn’t identical to what you have heard or what your Chinese friends teach you. Most of the words are universal, though. First, here’s an image of what the tiles look like: 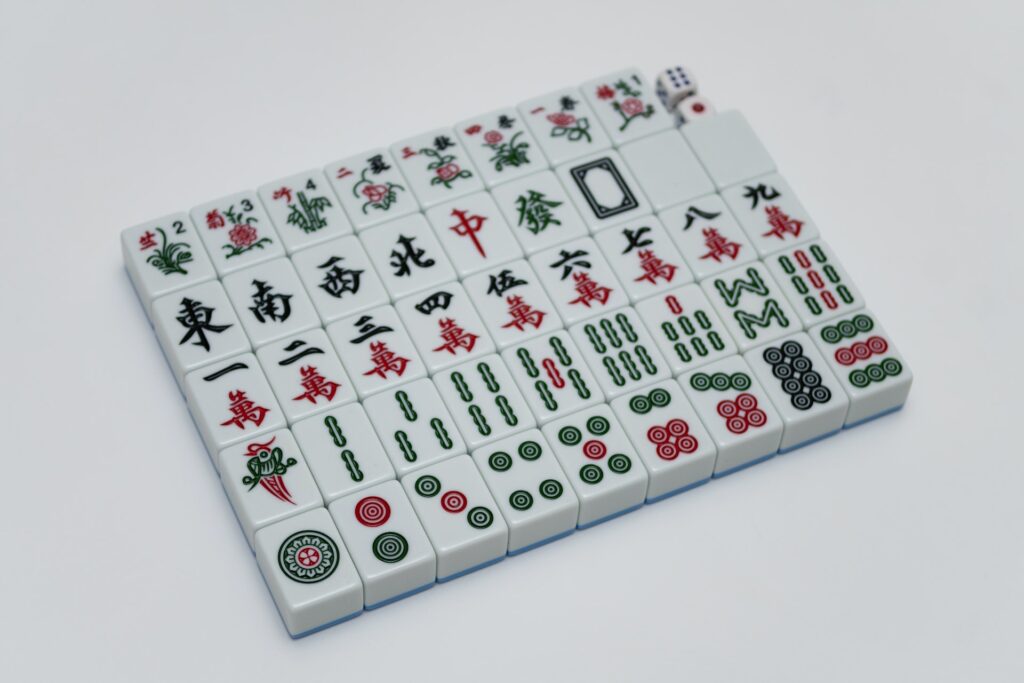 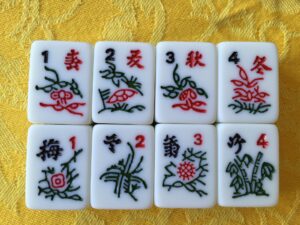 Please note that the bonus tiles merely add randomness to the game and are therefore generally excluded from competitive play.

If I’ve missed anything important, please leave a comment! 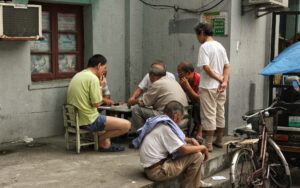 As mentioned earlier, I’ve played a fair amount of Mahjong games in Chinese with native speakers, and the only drawback is that if you’re not already quite good at the game, it’s hard to chat and play at the same time. It can also be hard to keep up, because experienced players play very fast and have long since forgotten what it was like to be new to the game. They are also able to play the game while talking about something else, not calling out tiles or using any of the vocabulary listed above, except when calling the attention to something important.

Don’t be afraid to ask them to slow down a bit and to call out the names of the tiles they play. If you don’t understand what’s going on and tiles just seem to fly around without rhyme or reason, it won’t be fun and you won’t learn much Chinese either. You can always let them play without you later if you think you’re intruding too much. Generally, though, Chinese people are welcoming to foreigners playing with them, at least casually. You might not be invited to the high-stakes games late at night, but that isn’t the point!

How to get better at playing Mahjong and learn more Chinese 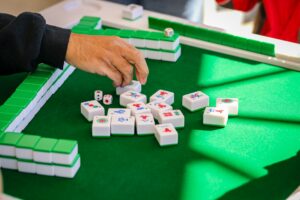 Mahjong is like most other card games where you draw and discard cards to complete sets. You need to be mindful of what you are doing, what you think the opponents are doing, and potential risks and benefits for each play. There’s also a fair amount of luck involved, so even someone who plays perfectly will often lose. Naturally, over longer games (a full game consist of at least 16 rounds), luck evens out and strong players prevail over weaker ones more often than not.

Mahjong is just one example of a game that can help you learn Chinese. In fact, games are powerful learning tools if used properly. This is true not just for classic Chinese board games like Mahjong, but all games! Read more here: 10 ways of using games to learn and teach Chinese