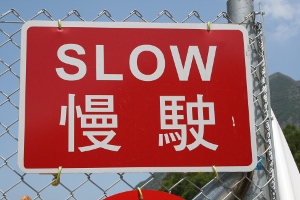 Many years ago, I practised taichichuan/taijiquan (太極拳) daily, but even if I’ve since found other physical activities I enjoy more, it was still my martial arts practise that brought me into contact with Chinese language and philosophy in the first place. I’ve found that many of the concepts I encountered while practising also applies to learning Chinese.

My taichi instructor told me to make sure that movements are big and slow in the beginning, and then, as skill improves, they should become  quicker and more efficient. His rationale for saying this is clear: if you learn to do things with slow, big movements, it’s quite easy to make them quicker and more efficient once you’ve learnt the motions properly. If you do it the other way around, however (i.e. you do everything quickly and with small movements from the start), it’ very hard to learn things properly.

This is true for language learning as well.

I’ve heard this so many times my ears bleed and my soul cries every time I hear it. It’s something along the lines “Chinese people don’t care about tones anyway, I can sound native-like if I just speak quickly enough”. I have heard the same about handwriting, albeit not as often. These are misconceptions that will only lengthen the time it takes you to learn Chinese (this isn’t the topic of this article, though, but please read my article about the importance of tones for more about this). Going for speed from the very start is simply a really bad idea.

In this article, I want to talk about what we should do instead. I believe we should heed my instructor’s advice: we should make things bigger, slower and clearer. When we know how to do that, then we can shrink, speed up and relax.

Disclaimer: This article is about deliberate language practise. It should not be taken as an indication that you should always do this, even though I think there are advantages of doing that as well. Rather, I’m saying that this kind of practise is necessary if we hope to attain an advanced level. If you’re only after basic communication ability, this article is probably irrelevant.

The principle of exaggeration can be applied to pronunciation. When you start learning pronunciation of tones, try to exaggerate. Most teachers will do this anyway, but you should do the same. If we’re talking of tones, make sure you get them right and that you enunciate all of them clearly. Learn to pronounce them one and one, then two and two and then on the sentence level. Likewise, make sure you distinguish different sounds clearly. Speak more slowly than you are capable of: speaking Chinese is not a race and few people judge you proficiency by how quickly you speak.

A similar case is writing. Before you really get the hang of writing Chinese characters (and that takes some serious practise), write slowly and make sure you get things like stroke order and individual strokes correctly (should it be 己, 已 or 巳; 末 or 未? See this page for many more!). Take care to make the characters roughly the same size and in the shape of squares. When you know how to write big characters, start writing them smaller. When you know how to write them slowly, start practising speed.

The reason I’m saying this is not because I’m a language fascist who believes that a missed tone is a catastrophe  or an erroneously written character is heresy (you should see my handwriting). No, I’m saying this because if you want to be able to speak Chinese quickly, fluently and accurately (like a native), you can’t aim for that immediately, because you will most certainly lose accuracy on the way. Similarly, if you want to be able to write characters like a native, you have to be able to write properly first. Most native speakers took many, many years to learn how to write like that, you can’t get there simply by mimicking what they’re doing.

The essence of all this is that it is easier by far to speed up slow, articulated speech compared to slowing down sloppy, quick speaking. Since there will always be situations where accuracy is more important than speed, being able to do this is quite important. In the same way, only being able to write sloppy, ugly characters isn’t a good idea, but if you know how to write properly in the first place, it’s very easy to write quickly if you want to.

But then everybody will know that my Chinese sucks!

In a sense, this is true. Indeed, it’s part of why it’s good. If you speak slowly, everybody will hear when you make the slightest mistake. If you write characters as large as your hand, the slightest mistake will be noticed immediately. That’s excellent, this is why this is such a good idea! I know, exposing yourself in this way might be scary (I think it’s scary too), but making mistakes is an essential part of learning! You won’t get very far without it.