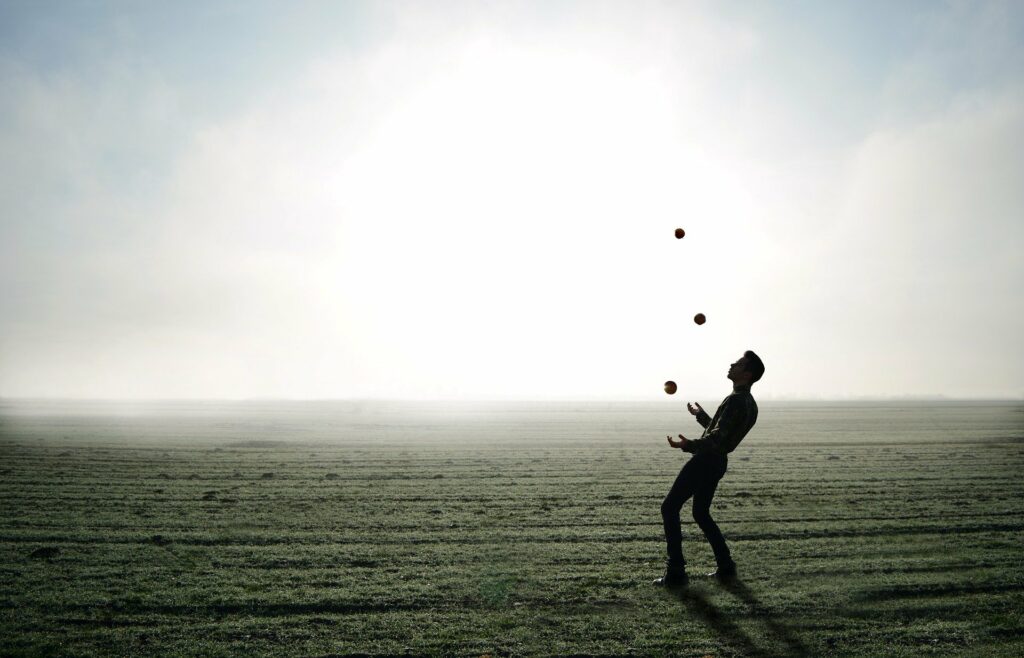 It is often difficult to gauge the difficulty of tasks before you have already mastered them. Some things seem hard, but are actually quite easy; others appear easy, but are in fact very difficult.

My favourite example is juggling, which spans the whole spectrum. Learning to juggle with three balls is much easier than most people think, but juggling with more balls (five and up) is much harder than people think. The first takes an hour to learn, but mastering five balls can take a thousand times longer.

The same is true for learning Chinese. Some things are like juggling three balls: it looks hard if you don’t know anything about it, but once you try, it’s not that bad.

Other things are like learning to juggle five balls: they look deceptively manageable, but only if you haven’t actually tried to mastered them.

Misjudging the difficult of a learning task has different consequences depending on the direction of your error:

In this article, I will focus on aspects of learning Chinese that are harder than they seem. I will probably write a follow-up article later about the reverse case when things are not as hard as they seem.

These six things in Chinese that people seem to think are easier than they truly are. Naturally, not everybody will agree, but I have limited my selection to things that I’ve heard people misjudge often or things I have misjudged myself. If you have additional examples, please leave a comment below!

This is perhaps the most wide-spread misconception about learning Chinese. I regularly see beginners ask for reading recommendations and specify children’s books in the mistaken belief that they will be easy.

I fell into this trap myself as a beginner. I thought that large, friendly characters and colourful pictures meant that the book would be easy to read.

No, books for kids are not easy for second language learners.

The fundamental mistake here is to forget that children already speak their language fluently when they learn to read. They are learning to read what they already know how to say. Books for very young children usually have lots of characters for animals, animal sounds and so on, none of which are either useful or easy for an adult foreign language learner.

Here’s a page from a book I tried to read as a beginner called 小故事大道理：民間故事. 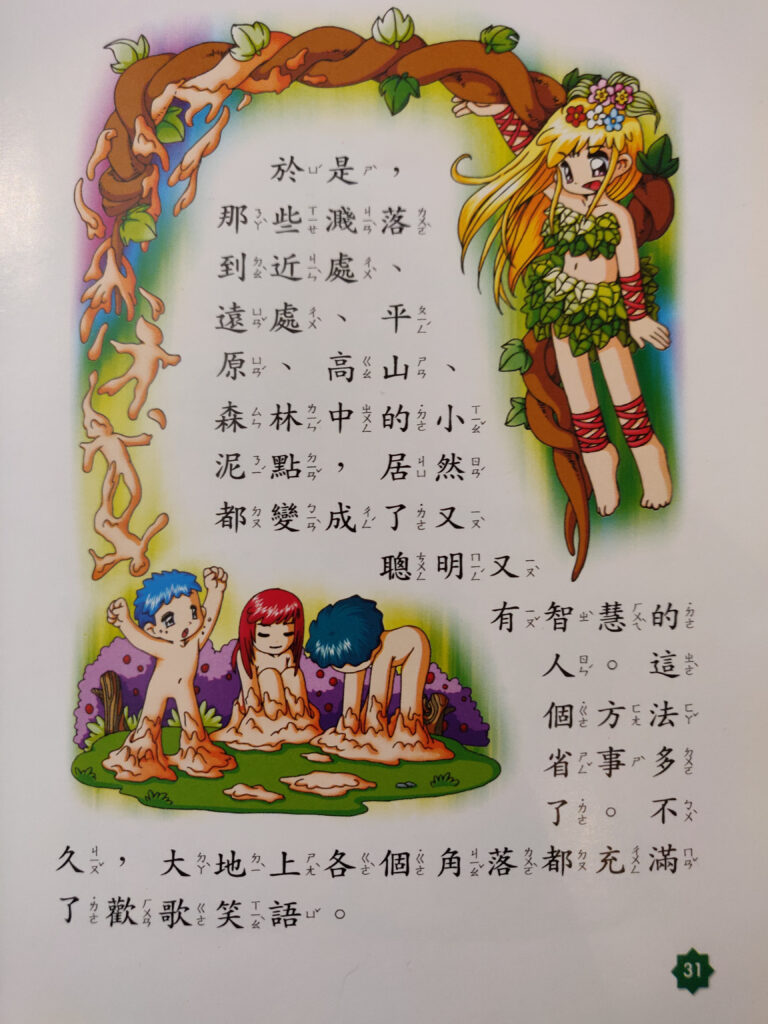 Doesn’t it look friendly? However, there are many, many words that a beginner would struggle with here, and most of them would be completely useless to learn before you reach a much higher level. The book is in traditional Chinese because I studied in Taiwan at the time, but I’ll provide simplified below as well:

On this randomly selected page, we have the following words that few beginners would understand and none should spend time learning:

So roughly half the characters on this page are in words that you don’t need as a beginner. In the whole book, I looked up and learnt almost 800 words, but looking through the list in retrospect, very few of them were actually useful. My effort was mostly wasted.

I could go on, but since John Pasden already covered exactly this topic over at Sinosplice, I’ll point to his article instead: Chinese Picture Books as Learning Material.

Conclusion: Don’t use children’s books to learn Chinese, because they aren’t easy and won’t teach you words you actually need to know.

Ordering food in Chinese is surprisingly hard. The reason is that there are many, many characters that are only used to describe food. This included both different ways of cooking the ingredients and the ingredients themselves.

Sure, figuring out what animal is involved is fairly easy as a beginner, but beyond that, you’re probably out of luck. When living in Taiwan, I think restaurant menus were the area of everyday life where I kept encountering characters I didn’t know, even after learning thousands of them. Now, this is partly because I’m not terribly interested in cuisine, but menus in Chinese really are quite hard.

A laughable version of this can be found in the (in)famous TED talk about Chineasy (which I covered in this article), where it’s claimed that menus can be understood with only 200 characters. This is so far from the truth that it can only be interpreted as a joke. She actually also includes basic web pages and newspaper headlines, which puts this even further into imaginary fairly land.

Don’t feel bad about not being able to read menus in Chinese, because it really can be very hard! To be honest, though, this is true in English as well, where there are many words that are only used in this context (venison, mutton, various types of fish and so on).

While there is broad variation in the difficult of song lyrics in any languages, it seems that Chinese people in general care more about the text than the melody, and that the opposite is true in the west (yes, there are of course many exceptions).

In addition to that, song lyrics are of course creatively written, which is true in any language. Thus, if you find a song you like in Chinese and read the lyrics, only to figure out that it doesn’t make much sense to you, don’t feel too disappointed!

Please note that I don’t claim that this is universally true for all listeners and all artists, I just mean that based on what I have listened to and studied, Chinese pop music contains much more literary and therefore more difficult language.

I remember when I decided to learn 再见萤火虫 by 王菲 and found it pretty hard (lyrics on screen, but also here in plain text):

For more about using music to learn Mandarin, check the series of articles that begin with this article: Why learning Chinese through music is underrated

Why learning Chinese through music is underrated

Someone who can hold a conversation about a topic in English will probably be able to read a news article about that topic, provided they know how to read the words.

The same is not as true in Chinese, where there’s a whole set of words that are mostly used in formal, written Chinese, which is of course normal in newspapers.

Another factor that contributes to the difficulty of reading news is lack of context. Most intermediate learners of Chinese don’t know enough about Chinese culture and society to make sense of newspaper articles. Naturally, this becomes easier the more you read, I just want to point out that there are other factors than language limiting comprehension the first time you open a Chinese newspaper.

No one thinks that short stories and novels are easy to read in any language, but the reason I include fiction here is that it tends to be harder than many students think. Just like with the song lyrics above, this is rather hard to prove quantitatively, but is based on my own reading experience, along with most people I’ve talked to about it (I’ve so far never met someone who doesn’t agree, so if you do, please leave a comment below).

In English, it’s perfectly okay to write using fairly simple words, some authors are even famous for it, such as Ernest Hemingway or Graham Greene. Their stories are fairly accessible for intermediate learners of English.

In Chinese, however, there’s a much stronger tendency to want to show one’s erudition by throwing around fancy words. Again, there are of course exceptions, I’m trying to get at a general tendency here, not a natural law.

An example of this would be translations of the above-mentioned authors. For example, I have read The Old Man and the Sea in Chinese (老人与海/老人與海), English and Swedish, and in the latter two, the vocabulary is fairly easy, except for a few words related to fish and fishing. In Chinese, however, the simplicity of the language in the original is lost.

One way to put it would be to say that the amount of reading practice a student would need to have under their belt to tackle this book in Chinese is considerably higher than in English, even if we ignore the difficulty of learning Chinese characters.

Easing yourself into reading novels in Chinese

Posts on social media can be very, very difficult to understand. I have studied Chinese for more than a decade and of course read what many Chinese-speaking friends write on social media. It’s surprisingly common that I read posts I have no idea what they mean.

There are two reasons for this:

Some things appear easier than they are. If you think learning to juggle three balls is difficult, have you really tried? I think most people can learn that in a few hours without too much trouble (find a basic tutorial if you’re going to try it, as you won’t get very far if you try to learn the wrong pattern).

This article is obviously not about juggling, but learning Chinese. What things have you encountered that you other people around you thought were easier than they turned out to be? Do you agree with my selection in this article? I’m curious to hear what you think, so please leave a comment below!